To continue its support of the E3’s and the EU’s efforts, in early January 2018 the ELN took a very senior non-governmental European delegation to Washington DC at a crucial moment in US decision-making to discuss the future of the JCPOA.

Senior European diplomats and American think tank experts praised the ELN’s research and efforts, while a former US Energy Secretary, US Senator and US Ambassador all endorsed the ELN’s work. Members of the delegation received excellent feedback and believe their weight, seriousness and arguments resonated privately with US interlocutors. Indeed, contacts on Capitol Hill asked the ELN to continue to feed in European arguments and material. Moreover, in January the ELN’s Chairman, Lord Desmond Browne, mentioned the delegation to Washington in a speech to the House of Lords on American foreign policy.

Two members of the delegation, Professor Angela Kane (former UN High Commissioner for Disarmament and Arms Control) and Sir Simon Gass (former UK Ambassador to Iran and senior UK official working on the JCPOA), also took part in a press briefing, organised and presided over by Diplomacy Works. Their case usefully reinforced the positions of European governments. Links to some of the resulting media reports can be accessed here.

The day after the visit ended (12th January), President Trump announced that he was extending the US waiver of nuclear sanctions one last time. This was to give Congress time to agree bi-partisan legislation and to give European Allies a final chance to negotiate not amendments to the JCPOA itself but a “supplemental agreement”.

The consultations between U.S. officials and their counterparts from the E3 (Germany, France, and the United Kingdom) opened up some space for diplomacy. In this context, the ELN published a policy brief by Sir Simon Gass which explored ways forward for these crucial negotiations and examined the prospects for a ‘sweet spot’ where Europeans could address U.S. concerns without undermining the agreement or alienating its other signatories, most crucially Iran. The brief was well received in E3 capitals, and aligned well with the position ultimately taken by E3 representatives.While the consultations between Europeans and Americans made good progress, the significant risk of a unilateral U.S. withdrawal from the deal nonetheless loomed large. In the crucial period leading up to Trump’s final decision on the agreement, the ELN led public initiatives to express Europe’s commitment to the deal.

First, it supported an unprecedented parliamentary initiative through which over 500 members of parliament from the E3 countries publicly called on their American counterparts to what they could to sustain the nuclear agreement – and the grand diplomatic coalition which made it possible.

Second, 106 senior members of the ELN issued a public group statement which called on the United States  “not to take unilateral action that would jeopardise the deal and trigger a crisis in US-Europe relations.” The statement was widely referenced in U.S. and European media.

Third, senior members of The Top Level Group of UK Parliamentarians for Multilateral Nuclear Disarmament & Non Proliferation, a cross-party ELN initiative, published an open letter to President Trump which warned of the consequences for U.S.-UK relations of a U.S. withdrawal from the JCPOA.

On May 8, President Trump announced that he would withdraw from the JCPOA and re-impose all nuclear sanctions against Iran, together with “additional economic penalties.” In the eyes of many observers, the onus is now on Europe to defend the deal and sustain the implementation. As part of the discussion on what Europe can accomplish in this situation, ELN Policy Fellow Axel Hellman published a policy brief, “Safeguarding the Iran Nuclear Deal: A Blueprint for Europe.” 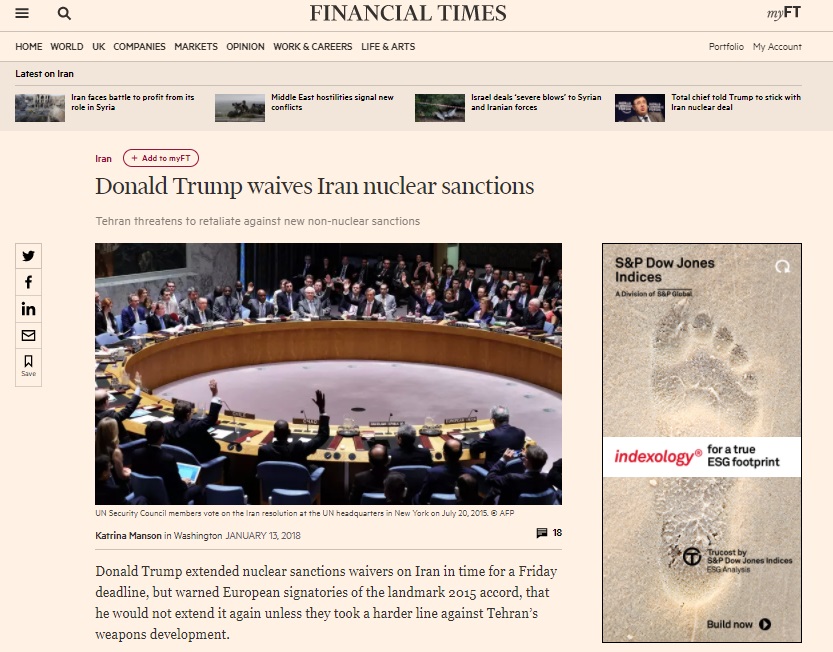 Trump’s decision to pull America out of the nuclear deal risks unravelling a product of more than a decade of coordinated diplomacy. As the fate of the nuclear deal will be settled in the period ahead of us, the ELN remains committed to work alongside governments to achieve practical, positive progress towards better security.

When the JCPOA found itself under threat due to the actions of President Trump and his administration, the ELN members again rose to the challenge. The September 2017 statement which warned the US against stepping out of the agreement, attracted a record 80 signatures. At the same time, the statement offered the US European cooperation in limiting some of Iran’s activities such as ballistic missile development.

It received a broad media coverage around the world and amplified Europe’s efforts to ensure the future of the JCPOA across the Atlantic.

The ELN statements and actions thus formed a part of a major European diplomatic offensive, which most likely have played a role in the Trump administration’s decision to refrain from recommending to the Congress a simple withdrawal from the deal.

Despite their many differences, the members of the European Leadership Network have been united in their support for a diplomatic way out of the Iran nuclear crisis, recognizing its direct link with the security of Europe.

Using the Top Level Group (TLG), the ELN helped to build support for the Iran nuclear deal, educating parliamentarians on its progress and encouraging US Senators to ratify the agreement. TLG members published letters in prominent US newspapers endorsing the deal, encouraging their US counterparts to do the same. A first letter in January 2014 in the Wall Street Journal, ‘British Notables Support the Provisional Iran Accord’, was followed by a second letter in the New York Times in July 2015, ‘10 Prominent Britons Back the Iran Nuclear Deal’. Similarly, three former E3 Foreign Ministers (all ELN members), wrote a letter in Le Monde supporting the deal.

Finally, in July 2015, ELN members wholeheartedly endorsed the signing of the the Joint Comprehensive Plan of Action (JCPOA). In a statement signed by over 70 ELN members, including former Prime Ministers, Foreign Affairs and Defence Ministers, diplomats and military leaders, the agreement was described as a “sound framework for ending the crisis over the Iranian nuclear program and a foundation for re-integrating Iran into the international community”. The statement urged specific actions to implement the deal by the U.S. Congress, EU countries and Iran.

Mitigating US Sanctions on Iran: The Case for a Humanitarian Special Purpose Vehicle

In the face of US sanctions, exemptions for humanitarian trade in Iran are proving insufficient. In a new policy brief, authors argue for the creation of a new humanitarian special purpose vehicle (H-SPV) to avoid any crises.