ELN senior associate fellows offer their predictions and views on the regions and developments to keep a close eye on in 2018.

At their summit in May, the Albanian Prime Minister warned NATO leaders that the Balkans were being squeezed between Russia and Islamic fundamentalism. Would that it were so simple! In April, the International Crisis Group defined the region’s problem as “a special case of unchecked executive power, erosion of the rule of law, xenophobia directed at neighbours and migrants and pervasive economic insecurity.” In other words, home grown.

Neither EU nor NATO has been idle. NATO accepted Montenegro as its 29th member in 2017. In Kosovo and Macedonia the EU has exerted its influence to keep antagonisms within manageable limits. Somewhat disingenuously, the Commission has identified Serbia and Montenegro, despite their pervasive corruption and evident shortcomings, as frontrunners in EU accession negotiations. The EU has even conducted its first ever Strategic Assessment of Bosnia, trying to determine whether the lure of EU accession could eventually lead to the termination of the EU’s largely token military presence in the country with Dayton Agreement responsibilities.

The tensions over Macedonia and Kosovo will probably intensify in 2018. Added to this, Bosnia is headed for constitutional crisis. Elections there in October will sharply expose the mutually blocking ambitions of its constituent peoples. Inevitably, Russia will be blamed for the stalling of that country’s efforts to get closer to NATO. But as ever, in Bosnia and the region, local resentments and fears, more than malign outsiders, determine the speed of integration into Western institutions. When the crises come, NATO and the EU should exercise patience. The EU in particular should remember that it is still the only show in town and everyone, without exception, but above all Serbia, is queuing for a ticket.

2018 will be a year of hard work on defence and security for the EU, in both theory and practice. Conceptually, it will be the year in which the union must start transforming the high aspirations of 2017 into practice: defining the commitments entailed in PESCO (Permanent Structured Coordination), and creating its initial structures; implementing the first phase of the EDF (European Defence Fund), and mapping the potentials of the next phase; and expanding EU-NATO cooperation, both in order to ensure the new structures enable interoperability and to find an equitable sharing of responsibilities — especially with regard to Russia.

It is difficult to see a meaningful change in EU or NATO relations with Russia, meaning increased resources in both institutions will be devoted to recreating defensive structures on the eastern and northern borders while pouring ever more resources into cyber capabilities. At the same time, the EU will be devoting ever more time to its other borders. Turkey, as the gateway to the Middle East, remains also the most potentially porous for terrorists and migrants, while the southern regions, beyond the Mediterranean, and sub-Saharan Africa will loom ever more significantly for the same reasons. Securing its borders will therefore remain a central defence and security preoccupation for the EU.

Russia will continue to be the dominant factor in European security calculations and the determination of the West to deter Russian goals at all levels of activity means that confrontation will have primacy over cooperation. The resulting emphasis on collective defence in Europe for reassurance will inevitably lock in strategic priorities for defence and limit options elsewhere. This emphasis reflects the dire state of relations between Western member states and Russia. Two sharply divergent narratives compete to attribute responsibility; each contributing to the collapse of dialogue and cooperation.

The need for engagement has never been greater. Yet the divergence is widening and as a consequence the incentive is narrowing. Russia is turning towards Eurasia and away from Western values, increasingly assertive abroad in reclaiming influence and repressive at home. For the EU and NATO enlargement has brought new members whose historic experience means they see dialogue as a sign of weakness. Moreover the pervasive dominance of the narrative that sees Russia as omnipresent stifles efforts at dialogue, dismissing them as naive or even subversive “the Kremlin’s Trojan Horses”: an approach itself both divisive and counter-productive.

Alongside these political differences military structures and dispositions are being deployed in sensitive regions. These activities constitute a potential catalyst for miscalculation and exacerbate the existing risks posed by unconstrained military activities. A continuation of existing conditions carries unacceptable risks; the only alternative is a return to engagement on common challenges; above all in military contacts. The prospects may be remote but engagement with Russia must return as the guiding principle for European security.

Earlier this year China inaugurated a new satellite station on Greenland. That’s not as surprising as it sounds. Chinese companies have been investing in the Arctic island for several years, and the locals – who govern themselves as a largely independent region of Denmark – are happy for the interest in their struggling economy.

But China isn’t investing in Greenland (or Norway, or Iceland, where it also has a disproportionately large embassy) out of compassion. On the contrary, its presence in the Arctic is part of a long-term strategy to make it a key player there. That’s because while climate change is beginning to impact all parts of the world, the Arctic is particularly affected. From an environmental perspective, the melting Arctic ice is bad. But for China, it’s good: it means a new viable shipping route to and from Europe. Chinese companies’ investments are accompanied by a growing government presence. The new satellite station is thought to be dual-use.

China is not alone in staking out a spot in the warming Arctic: Russia has been opening and reopening military bases. The United States, meanwhile, seems to be losing the Artic race. Vice Admiral Fred Midgette, the commander of the Pacific Area (which includes the Arctic) warned last year that the US was falling behind Russia in military presence. It only has one icebreaker that can patrol Arctic waters, and it’s ageing out of service. Russia, meanwhile, has several dozen including six new ones.

The US will no doubt wake up to the race, while frenemies China and Russia continue their sprint. During the Cold War the Arctic was an exceptionally rare region where scientific cooperation between the Soviet Union and, for example, NATO member Norway thrived. Today even such cooperation is suffering. Indeed, the new Arctic geopolitical race makes the region both more prominent and less stable than it was during the Cold War. We should pay close attention. 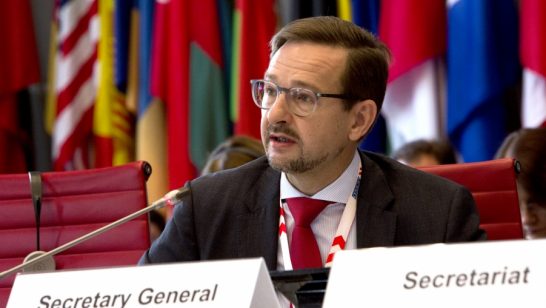