Russia is pursuing a twin-track policy in Syria. Its airstrikes are continuing at a high tempo, and continue to hit a wide range of anti-Assad forces on the ground. At the same time recent reports suggest a Russian backed Syrian peace plan is circulating at the United Nations. The two elements of the policy are linked. Russian warplanes are being used to demonstrate that Assad will not be allowed to fall but also to strengthen his constituency’s hand in the peace talks to follow. The west should now learn from what Russia is doing and apply greater military pressure of its own while biting the bullet on negotiating with Assad.

If western leaders are to do this, however, they will have to accept some hard truths. Their policy on Syria to date has been tragically misguided and strategically incoherent. It has not helped the people of Syria and is now generating side-effects that are a major threat to European and wider western interests.

For over two years, the west has argued that Assad must go before there can be meaningful negotiations. At the same time it has refused to commit the necessary military power to remove him. It has argued that to negotiate with Assad, a butcher who has killed thousands of his own people, would be an affront to the people of Syria and to western values. Yet the biggest threat to the Syrian people is the continuation of the war. And the biggest threat to western values now comes not from Assad but from inside Europe, where commitment to solidarity is collapsing and intolerant populist movements are thriving on the back of the flows of refugees escaping the conflict.

The west badly needs a new policy. This policy must more thoroughly align interests with values. To achieve that aim it must consist, at a minimum, of the following four elements.

First, it must radically increase military aid to the moderate opposition in Syria and provide air support to their operations on the ground. There are risks in this policy, particularly in relation to US led coalition forces coming into conflict with the Russian military but the recent deal on de-confliction makes these risks manageable. As with Russia’s actions, the application of greater western military power must be for political effect. It must demonstrate to Assad, Putin, and the Iranians that diplomacy is possible but total defeat for the moderate opposition is not. Nor will they be left to negotiate from a position of weakness.

Second, the west must be willing to create safe areas inside Syria so people do not have to flee to Europe to save their own lives. Western air power should be used to enforce no fly zones over these areas and opposition fighters should be given everything they need to defend them on the ground.

Third, the talk of increased EU aid to African countries and additional conflict prevention measures, audible ahead of this week’s Malta summit, is to be welcomed, but the west must also increase economic support to Turkey, Jordan, and Lebanon. The challenge to the economic, social and political stability of each of these countries from massive refugee flows is enormous. Should any one of them become destabilised to the point of collapse or serious internal strife, the effect would be to deepen the current humanitarian crisis in the region, and to further increase refugee flows to neighbouring countries and to Europe.

Fourth, and on the basis of the other three measures, the west must drop its insistence that Assad must go and make clear its willingness to negotiate an end to the Syrian war. Whether Assad personally survives a deal or not, any negotiated settlement is going to have to acknowledge the existence of the constituency of opinion he represents. It is also going to have to acknowledge the fact that Iran, having recently joined discussions on the issue, must be involved.

There are many who oppose this plan of action but in their commitment to current policy, they are now undermining the very values they say their position is designed to reflect.

To pursue the course suggested would not be to abandon a commitment to universal human rights or to choose between those values and western interests. It would be to align the greater use of western military power with a political strategy to end to the war.

It would be to do what is necessary to lift the Syrian people out of the nightmare into which their country has fallen and to act to prevent further loss of life.

It would be to make clear, through significant military support to the opposition, that the west will not allow what remains of the Arab Spring in Syria to be totally extinguished and in fact will do what is required to make sure it influences the future direction of the country.

And it would be to act to stem the flow of refugees to Europe and in doing so, to prevent populists from destroying the historically transcendent commitment to cooperation, solidarity, and tolerance that seven successful decades of European integration represents.

It would be, in other words, to align western interests and values, and to act in defence of both.

After the negotiations over the Iranian nuclear program in Vienna ended in a delay, two leading experts offer their thoughts and cautious optimist to the European Leadership Network.

In a letter to the Wall Street Journal, 15 British ELN members strongly welcome and support the agreement with Iran reached in November and the recently announced implementation of the Joint Plan of Action. 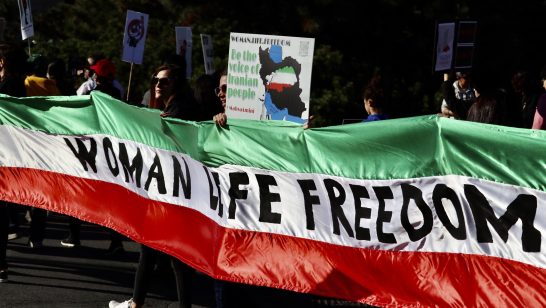 Workshop report: Getting the JCPOA through 2022 and the US and Europe effectively engaged with Iran

In October, the ELN and Hanns Seidel Foundation partnered on a track 1.5 meeting in London which brought together a range of European and Iranian participants both to assess how the JCPOA could still be revived and to consider alternative scenarios in more detail. The ELN’s Policy and Impact Director, Jane Kinninmont, captures the key highlights from the meeting.