The Arctic has been in the headlines more and more in recent years. Most recently, Russia resubmitted a territorial claim to the United Nations for over 460,000 square miles of territory, causing some news outlets to predict that the region is on the brink of military conflict. Canada, Norway and Denmark have all submitted similar claims, with Denmark’s claim to extra territory dwarfing Russia’s. All five Arctic states, the United States, Canada, Russia, Denmark and Norway are enhancing their military presence in the region. However, many commentators have unreasonably focused their attention on Russia, leading some to believe that Russia is entirely responsible for provoking an imminent Arctic arms race, if one is not already underway.

The Arctic is evolving. Climate change is transforming it from an inaccessible frozen plain largely devoid of a human presence, spare a limited number of indigenous inhabitants and a few explorers and scientists, to a region that is increasingly accessible and full of activity. Its economic potential is forcing the Arctic up the agenda both for regional powers and the wider world. The context of competing sovereignty claims, a global desire to profit from Arctic resources, and increased military activity, could potentially be a recipe for disaster, begging the question of whether the increased activity will result in cooperation or conflict.

Following a hiatus after end of the Cold War, Arctic states have become increasingly interested in the region and it is easy to see why. A 2013 report showed that 13% of the world’s undiscovered oil reserves and 30% of its undiscovered gas are thought to be in the Arctic. Melting sea ice also represents an opportunity for the opening of a number of new commercial sea lanes, which is especially significant at a global level. Rising powers that are becoming considerably more resource dependent, most notably China, have increased interest in the region. Lucrative and profitable developments form the basis of the argument that a race for resources will lead to militarisation in which confrontations become increasingly likely if not inevitable.

Until recently, however, the Arctic has remained largely peaceful and has been the focus for increasing cooperation. The last instance of tension was Russia’s infamous claim to the North Pole after placing a titanium flag on the seabed. The events in Ukraine, however, have brought tensions between Russia and the West to a post-Cold War high, with consequences for the Arctic. Concerns that the spill-over of an external event may destabilise the Arctic’s political climate have increased, and the region has undoubtedly suffered from ‘geopolitical fallout’ from events in Europe. Russian Arctic interests originally escaped Western sanctions, but have been targeted since September 2014 due to Russia being dependent on technologies, expertise and financial backing provided by the West to unlock their Arctic territories’ full potential. Sanctions have specifically targeted Russian oil ventures, potentially scuppering Putin’s plans for Arctic energy dominance.

Still, cooperation is in the interest of all sides. The West should take heed of the Deputy Head of the Russian Foreign Relations Committee’s recent words: “When a person turns his back on you, you have two choices—you can run after that person, or you can start to talk to other people.” Russia is undoubtedly looking for alternatives to the West, most clearly in China. China’s presence in the region is increasing and could lead to an upheaval in the Arctic’s political climate if it is not jointly managed by the West and Russia. Arctic expert Michael Byres recommends that tougher sanctions against Russia are needed, however he argues that they should be redirected away from the Arctic. “The Arctic” he says ” has a different constellation of relationships and interests. If Russia and the West cannot co-operate in the Arctic, they cannot co-operate anywhere.” Easing the Arctic-specific sanctions is potentially the best course of action, in a bid to preserve and rejuvenate the modicum of cooperation that remains. Robert J. Papp, the US Special Representative for the Arctic, encouragingly stated recently the need for, “some sort of binding or non-binding agreement which leads to better cooperation on things like science and climate…so that we have the entire picture of the Arctic”.

Both sides need to be mindful of their actions, and how they might impact on the chance for long-term peace in the Arctic. Canada’s boycott of the April 2014 Arctic Council Working Group in Russia, and Russian Deputy Prime Minister Rogozin’s unannounced visit to Svalbard in April 2015, as well as a series of controversial tweets he sent, were entirely counterproductive and similar posturing  must be avoided in the future. If cooperation and dialogue cease, there could be dire consequences. Military means could be used to reinforce claims of sovereignty, and accidents may be misinterpreted as provocations, escalating tensions in which military confrontation could be an outcome. Such situations are increasingly likely as NATO and Russia have increased military exercises, with the Russian operations having a large Arctic focus.

All that said, the alarmists’ ability to steal headlines risks overshadowing progress and the cooperation that has been accomplished before. Arctic cooperation has so far averted conflict and reinforced stability, which should be celebrated. The Arctic Council has undoubtedly improved relations between its members, and the signing of the 2008 Ilulissat Declaration in which the US, Canada, Russia, Norway and Denmark reaffirmed their commitment to resolve disputes peacefully illustrates this. Cooperation has also led to the creation of several forums that discuss military and security issues: the Arctic Security Forces Roundtable and the Northern Chiefs of Defence meetings. Recently the Council aided in the facilitation of two agreements on cooperation of Search and Rescue operations and marine pollution and response to oil spills. As some of the Arctic states search and rescue operations are conducted by the military as opposed to civil services, the former may develop into a framework for cooperative military exercises.

Events in Ukraine have irrefutably led to a deterioration in Arctic cooperation from the peak at the signing of the Barents Sea Delimitation and Cooperation Treaty between Russia and Norway. President Putin was once aware that it is in Russia’s interest to have cooperation with the West in the region. One can hope that he still considers as valid his admission in 2010 that:, “If you stand alone, you cannot survive in the Arctic”.  It is in both the West and Russia’s interests to salvage what remains of Arctic cooperation before rising tensions and external actors destabilise the region. The Arctic is one of the few avenues left to improve relations between Russia and the West. It represents a potentially mutually beneficial area of relations. Natural resource wealth can be reaped by both sides and together the West and Russia can mitigate the risk of rising powers upsetting regional dynamics and stability. Indeed, if the two sides cannot cooperate in the Arctic, where both have so much to gain, then what hope is there for the wider relationship?

Can the Russia-NATO relationship be stabilised?

Based on discussions with experts, officials and military figures in Moscow, European capitals and NATO Headquarters, this report identifies practical steps to stabilise the Russia-NATO confrontation. 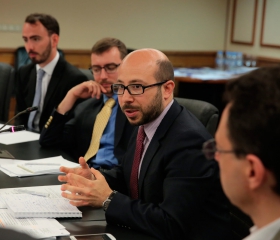