On February 14, 2014, Mexico’s Vice-Minister for Multilateral Affairs and Human Rights called upon all committed states to join in the negotiation of a treaty to ban nuclear weapons [1]. In the aftermath of the Mexican announcement, several observers have raised concerns about the merits of such an initiative, especially if the process does not include all the nuclear-armed states. What good would a ban treaty do if it only covers states that have already renounced nuclear weapons under the NPT and through nuclear-weapon-free zones? And, in the words of the UN’s High Representative for Disarmament Affairs, Angela Kane, ‘on what basis can anyone conclude that a ban-the-bomb treaty would eventually achieve universal membership?’ [2].

Kane is not alone in voicing such reservations and doubts, but as head of the UN Office for Disarmament Affairs (ODA) she could perhaps be excused for not recognizing the basic rationale that has given the ban-idea momentum. For decades, the whole nuclear disarmament establishment, including the ODA, has been operating on the assumption that any effort aimed at creating the conditions for a world free of nuclear weapons must be led by the nuclear-armed states, preferably by the United States and Russia. And old thoughts – like habits – die hard.

The truth is, however, that much of the current criticisms of the idea of a ban treaty tend to miss the target. The question is not really whether it is worth pursuing a ban on nuclear weapons without the nuclear-armed states on board (the strong opposition voiced by disarmament sceptics is a clear indication that it is). Rather, the question is whether it is really worth trying to convince the nuclear-armed states to support the negotiation of such a ban. The non-nuclear-armed states have been engaging the nuclear-armed members of the international community for decades, yet nothing in the current state of affairs suggests that the nuclear-weapon states are interested in anything more than paying lip service to the goal of a world free of nuclear weapons [3]. Therefore, if meaningful progress is to be made towards the prohibition and elimination of nuclear weapons in the foreseeable future, it will have to be initiated and driven by other states – by states that are genuinely committed to eliminating nuclear weapons. For Cold War nostalgics and proponents of a world order based on the type of Realpolitik recounted by Thucydides almost two and a half millennia ago, the idea that a process to prohibit and eliminate nuclear weapons could in fact be driven by states that do not themselves possess the weapons, may be difficult to come to terms with. But the sooner they do, the sooner they will understand why a treaty banning nuclear weapons has come to be seen as an increasingly realistic prospect.

Once the abovementioned premise is recognized, the basic argument underpinning a ban on nuclear weapons is simple: Any use of nuclear weapons would have ‘catastrophic humanitarian consequences’ [4], and in order to ensure that these weapons can never be used again, the international community should agree on a legally binding instrument that prevents all states from both using and possessing them. A viable formula for laying down such a commitment would be to negotiate a treaty – in accordance with the rules of the Vienna Convention on the Law of Treaties  [5] – explicitly prohibiting all acts that might lead to the detonation of one or more of these weapons, and to make sure that as many states as possible ratify and abide by the treaty.

The Australian Foreign Minister, Julie Bishop, has been among those criticizing the notion that nuclear weapons should be prohibited. With rather peculiar terminology, she has suggested that ‘a near-term nuclear weapons ban treaty would not provide a short cut to some form of security nirvana’ [6]. Several states have similarly questioned whether a ban on nuclear weapons in itself would ‘guarantee their elimination’ [7].

It makes little sense to comment on statements such as the one made by the Australian Foreign Minister. Had it in fact been a principled and reasoned position, it would result in the absurd conclusion that states such as Australia were opposed to any process or initiative that could not guarantee the total elimination of nuclear weapons and would not bring about ‘some form of security nirvana’. This is clearly not the case, which makes Bishop’s statement look like little more than an emotional outburst, or a petty attempt at ridiculing the proponents of a ban treaty. Conventions such as the Chemical Weapons Convention, the Biological Weapons Convention, the Mine Ban Treaty and the Convention on Cluster Munitions have clearly had positive effects, despite not having universal adherence.

Australia is among the countries that have vowed to continue to rely on nuclear deterrence for ‘as long as nuclear weapons exist’ [8]. If that is the ambition, and if what Australia really wants is to preserve a status quo in which a select group of states claim a right to continue to rely on a category of WMDs that is prohibited for the vast majority of other states in the world, then such emotional appeals may be useful. At least in the short run. But for states and observers who believe the calls for a nuclear weapon free world should be more than just lip service, it would be useful to start asking a different set of questions.

For example: Would a ban treaty include disarmament obligations? If so, how could disarmament obligations be verified without violating the basic prophylactic provisions of the NPT? Would a ban treaty allow for states with nuclear weapons to become parties before their stockpile destruction were completed? Would the safeguard provisions go further than those of the NPT? Would the treaty include requirements for implementation in national legislation? How would the issue of withdrawal be dealt with? And what would be the ratification threshold for entry-into-force of the treaty?

These are all perfectly legitimate questions that will require answers at some point. One way to approach it could be to look at the existing Nuclear-Weapon-Free Zones (NWFZ) and the conventions on other types of WMD [9]. If a ban treaty is modelled along the lines of the Chemical Weapons Convention, accession would be possible without having completed stockpile destruction. But that would probably require a system of disarmament verification that could make the negotiation process slower and more complex. If, instead, a ban treaty were modelled along the lines of the NWFZs, it would not contain a comprehensive set of disarmament obligations. It might, however, be more difficult for nuclear-armed states to accede to the regime before all weapons are destroyed and the elimination is verified by the IAEA. The point here is that the preferred model for a ban treaty is something states will have to decide on through an open, inclusive and representative process. At this stage, what is needed is to build support for the notion that nuclear weapons should be prohibited, just like the other WMD.

While it may still be early to start the actual negotiations on a legally binding instrument prohibiting nuclear weapons as called for by the Mexican Chair in February, it is by no means too early to start asking the right questions. After decades of waiting for the nuclear-weapon states to take the lead on prohibition and disarmament, the time has come for the non-nuclear weapon states to take matters into their own hands, and to show resolute normative leadership. If they decide to do so, the key question is not whether the negotiation of a ban would be worthwhile if the nuclear-armed states refuse to participate, but whether it is actually worth spending time and energy trying to convince them to support it.

[1] Chair Summary of the Second Conference on the Humanitarian Impact of Nuclear Weapons, Nayarit, Mexico, 14 February 2014, available at: http://www.sre.gob.mx/en/images/stories/cih/ci.pdf.

[3] On April 24, 2014, Marshal Islands filed formal complaints against the 9 nuclear-armed states at the International Court of Justice for their failure to eliminate their nuclear arsenals. For more details, see http://www.theguardian.com/world/2014/apr/24/marshall-islands-sues-nine-nuclear-powers-failure-disarm?CMP=twt_gu, and http://www.nuclearzero.org/pressmediacourtdocs

[4] 2010 Review Conference of the Parties to the Treaty on the Non-Proliferation of Nuclear Weapons, Final Document, available at; http://www.reachingcriticalwill.org/images/documents/Disarmament-fora/npt/revcon2010/FinalDocument.pdf.

[5] Vienna Convention on the Law of Treaties (adopted 22 May 1969, entry into force 27 January 1980), available at: http://www.worldtradelaw.net/misc/viennaconvention.pdf. 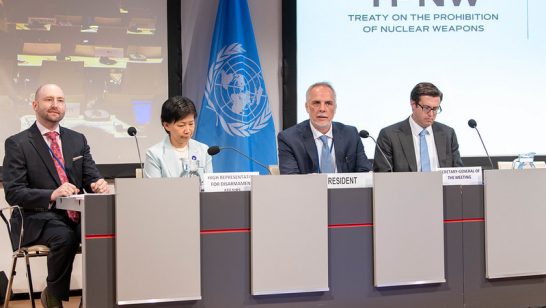 Leo Michel, Distinguished Research Fellow at the National Defense University, evaluates NATO’s attempts to deter Russia. From barely a mention at the 2012 Chicago Summit, to the focus of the recent summit in Wales, Michel outlines the work still to be done for NATO.