International Efforts to Control the Means of Delivering WMD

The international community is increasingly aware that combating proliferation of weapons of mass destruction must evolve in parallel with combating the proliferation of their means of delivery. The weapons are useless “sitting ducks” unless coupled with an effective means capable of delivering them to their targets.

The acknowledgement of this basic concept has grown progressively. The establishment in 1987 of a Missile Technology Control Regime (MTCR) was an early expression of the awareness of the link between weapons of mass destruction and their delivery means. This coming October the MTCR will celebrate in Rome the 25th anniversary of its first plenary meeting which took place in the Italian capital in 1988. It is a non-proliferation regime voluntarily accepted by a limited number of likeminded countries (34 to be precise) with no ambition to become universal. Its guidelines seek to “limit the risks of proliferation of weapons of mass destruction by controlling transfers that could make a contribution to delivery systems for such weapons.”

The accomplishments and experience acquired by the MTCR during a quarter of a century have become useful terms of reference for the international community and especially the United Nations. The first UN Security Council declaration of 1991 indicating that proliferation of WMDs was a threat to international peace and security, did not mention delivery means at all. However four years later, the idea that proliferation of WMD delivery means was also a threat to international peace and security gained ground: In 1995 the NPT Review and Extension Conference resolution on the Middle East, clearly indicated that WMDs and their “delivery systems” should be eliminated from the Middle East. In 2003 this comprehensive approach was retained in the introduction and in subsequent paragraphs of the European Strategy against the proliferation of weapons of mass destruction, which remains – to this day – at the heart of EU efforts on non- proliferation.

The principal UN document establishing the proliferation of delivery means as a threat to international peace and security is UN Security Council Resolution 1540 which came in 2004. This resolution is legally binding. It was approved under Chapter 7 of the UN charter: its violation can therefore entail the application of UN sanctions including the possible use of force. Moreover, it contains a definition of the term “means of delivery” which is not to be found in other texts, namely “missiles, rockets and other unmanned systems capable of delivering nuclear, chemical, or biological weapons that are specially designed for such use.”

An unprecedented focus on the proliferation of WMD delivery means as a threat to international peace and security is also contained in the G8 Camp David Declaration on Non-proliferation and Disarmament from 2012. This text, although not legally binding, was adopted under the US presidency of the G8 with the consensus of four of the five permanent members of the UN Security Council and is now part of the political heritage of the G8 group.

The Means of WMD Delivery

Missiles are the delivery means of choice for nuclear weapons: they have greater speed and survivability especially if they have to reach a distant target, than any other delivery option. Because they are relatively costly and not reusable, they are worth being employed to deliver a payload with a high destructive capability. There are different categories of missiles based on the way they deliver their payload (ballistic and cruise) and on their range (intercontinental, intermediate and short range). Many of them have the capacity to deliver nuclear weapons.

The logic regarding delivery means for nuclear weapons does not necessarily apply to chemical and/or biological weapons: ballistic missiles are not always the most efficient way to deliver certain types of chemical and biological materials. Slower flying vehicles like Unmanned Aerial Vehicles and cruise missiles are more suitable to deliver chemical and biological weapons which need to be sprayed over the target. As miniaturization of nuclear warheads and UAV capacities improves, it is likely that, in the future, this delivery means will also be capable of carrying nuclear payloads.

Cruise missiles are an intermediate category between ballistic missiles and UAVs: their range is comparable to that of ballistic missiles, their flying pattern makes them similar to UAVs but they are less detectable. Unlike most UAVs, they can only be used once: this makes their use more costly.

In spite of the fact that they are perfectly capable of delivering WMDs, manned systems (i.e. aircraft piloted by human beings) are usually not included in the category of WMD delivery means. The MTCR guidelines exclusively refer to delivery systems “other than manned aircraft.”  Also, UNSC Resolution 1540 specifically refers only to “unmanned systems”. The reason why they are usually excluded from the category of WMD delivery means is because of their very broad use worldwide mostly for conventional military and non-weapon delivery missions.

As the international attention on delivery means increases, a number of issues remain to be resolved. Missile limitations contained in UNSC Resolutions regarding the DPRK and Iran have not been fulfilled.

More widely, no specific multilateral norm, valid for the international community as whole, regulates the possession or use of missiles and delivery means. So far, the main efforts in this field have been made bilaterally by the US and the Russian Federation: they are also the largest missile producers and possessors. By ratifying in 1987 the Intermediate-range Nuclear Forces Treaty (INF), they are the only two countries having renounced a whole category of nuclear missiles. They have also unilaterally declared a reduction in their tactical nuclear missile inventories since the end of the Cold War and are consistently reducing their strategic delivery means. Their experience in reduction and verification of reductions could be a good lesson learned for other countries and regions. The NPT International Conference on the establishment of a zone free of weapons of weapons of mass destruction in the Middle East (if ever it takes place) will also have to deal with the issue of their delivery means.

In addition, The Hague Code of Conduct on Ballistic Missiles (HCOC), an offspring of the MTCR and a useful set of voluntary confidence building measures, refers only to one category of missiles. Its scope and the number of its participants could usefully be enlarged. Previous efforts to extend the application of the INF Treaty to other countries could be also resumed. The provisions regarding delivery means in Resolution 1540, which is a treaty-like resolution, also need to be implemented more fully.

A conspicuous amount of work still lies ahead to curb the proliferation of WMD delivery means.

Tom Sauer argues that, 70 years after Hiroshima, the Humanitarian Impact of Nuclear Weapons Initiative will transform the debate about the utility of nuclear weapons, leading to their de-legitimization. 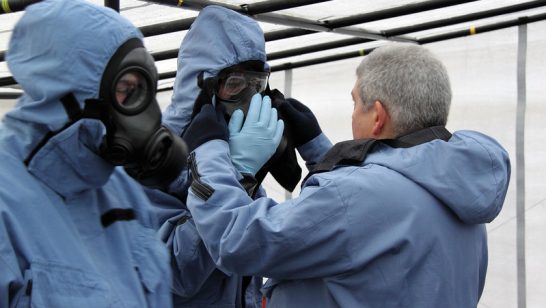 Chemical spill over: How the upcoming OPCW report on Syria could impact nuclear arms control

The outcome of investigations into chemical weapons use in Syria could drive another wedge between the P3 and the Assad regime’s diplomatic allies: Russia, China and Iran.