Of all the so-called “frozen conflicts” on Russia’s periphery, that between Georgia and its breakaway region South Ossetia, which declared its “independence” in 1990, is the arguably the one that Moscow has manipulated with the greatest success . Georgia’s President Mikheil Saakashvili’s decision to send tanks into South Ossetia in August 2008 to quash skirmishing between local paramilitaries and Georgian peacekeeping troops, deployed under the aegis of the Organisation for Security and Cooperation in Europe (OSCE), provoked a disproportionate response by the Russian military in which local Georgians fled the region for their lives and military infrastructure elsewhere in Georgia was destroyed.

In the wake of the war, Russian President Dmitri Medvedev announced Russia’s formal recognition of both South Ossetia and Abkhazia as independent sovereign states. He then proceeded to sign treaties with both formalizing the permanent deployment of some 2,000 troops at a military base in South Ossetia and 3,500 in Abkhazia.

Periodic four-way talks involving delegations from Russia, Georgia, South Ossetia and Abkhazia, and mediated jointly by the United States, the European Union, the UN and the OSCE, on addressing the humanitarian and security consequences of the fighting are deadlocked due to Tbilisi’s adamant refusal to sign a formal agreement with the two breakaway regions on the non-use of military force against them.

The governments of both Abkhazia and South Ossetia include men who took up arms in 2008 (or even two decades earlier) to repel a Georgian incursion, and whose fears of a new war are fuelled by the negative spin Russian politicians give to Georgia’s aspirations to NATO membership. Georgia nonetheless says it will sign such an agreement only with Russia, which rejects it as unnecessary and irrelevant.

Given the way that Russia has, since the collapse of the USSR, consistently sought to manipulate the conflicts in Abkhazia and South Ossetia to undermine successive Georgian leaderships’ pro-Western orientation, Georgia’s perception of those breakaway regions as simply Moscow’s pawns is understandable, even if it ignores their lack of any alternative ally or patron. Less understandable is Tbilisi’s disinclination to adopt a differentiated approach to seeking common ground with each one separately while conditions were still conducive to doing so.

The tensions resulting from Russia’s annexation of Crimea in March 2014,the subsequent bitter fighting in eastern Ukraine and the decision taken at the NATO summit in Wales in September 2014 to expand substantially military cooperation with Georgia, have narrowed the room for manoeuvre between Georgia and its breakaway regions and undermined the readiness of all parties involved to seek a compromise solution.

South Ossetia, by virtue of its size (150,000 sq. miles, 3,900 sq. km), population (estimated 51,572 in 2012) and lack of either industry or natural resources (it even has to import much of its food) has little chance of surviving as an independent polity and has been heavily dependent on Russian financial support since 2008. In addition, the question of the region’s formal relations with the Russian Federation is inextricably linked with that of the “re-unification” of the Ossetian people, who constitute approximately 65 percent of the estimated  713,000 population of the contiguous Republic of North Ossetia – Alania.

South Ossetia’s political parties are nonetheless divided between those who advocate preserving the region’s largely unrecognized “independent” status under Moscow’s protection, and adherents of the region’s eventual incorporation into the Russian Federation, whether as a separate federation subject or united with North Ossetia.

The latter faction is headed by the speaker of the South Ossetian parliament, Anatolii Bibilov, whose One Ossetia party won 20 of the 34 mandates in the May 2014 parliamentary election. In January 2014, Bibilov called for scheduling a referendum on “reunification” to be held simultaneously with that ballot.

Over the past 12 months, Russia has taken advantage of the West’s preoccupation with Ukraine to negotiate with South Ossetia a new treaty regulating their common border plus a framework treaty “On Union Relations and Integration” intended to supercede that signed in 2008.

The border treaty, which was signed on February 18, envisages the removal of border and customs controls on the Russia-South Ossetia border and the creation, at Russia’s expense, of such controls along the demarcation line between South Ossetia and the rest of Georgia. The Georgian Foreign Ministry has condemned it as a vain attempt “to conceal the de facto annexation of the Georgian territory” envisaged in the upcoming framework treaty.

The initial draft of the framework treaty triggered a heated disagreement between Bibilov, who argued that it did not take “integration” to the desired optimum level, and warned that the parliament would therefore refuse to ratify it, and moderates, including de facto President Leonid Tibilov. The fourth and final version provides for closer cooperation between the armed forces and security structures of the two polities but does not stipulate as a long-term goal the referendum on South Ossetia’s incorporation into the Russian Federation that Bibilov demanded, and that featured in the initial draft.

It is not clear whether that concession on Moscow’s part was the quid pro quo for the South Ossetian leadership’s enthusiastic support for the Russian-backed separatists  in eastern Ukraine. South Ossetia has sent “volunteers” to fight on their side and humanitarian aid for refugees from the fighting. It was also the first polity to “recognize” the May 2014 referendum in which the population of the self-proclaimed Donetsk People’s Republic (DNR) proclaimed its independence from Ukraine. Five months later, Tibilov congratulated the victors in the November 2 elections for the parliaments and chief executives of the DNR and its sister Luhansk People’s Republic and pledged to continue building diplomatic relations with the two regions.

However adroitly the wording has been finessed or fudged, the treaty on Union Relations and Integration, which has now been signed by Russian President Vladimir Putin, will still anchor South Ossetia firmly in Russia’s orbit for the foreseeable future. 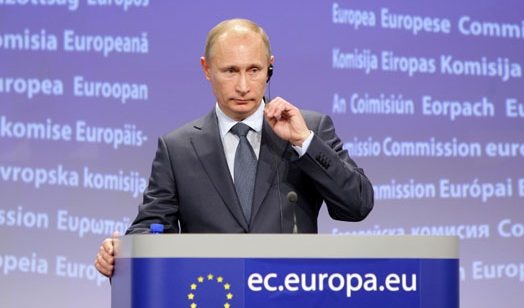 Why Russia, like the rest of the world, should pray for Remain

ELN Research Fellow Joseph Dobbs argues that while a Brexit serves President Putin’s geopolitical interests, Russians are still, like the rest of the world, best served by a UK vote to Remain in the EU.