On August 2nd 2019, the United States withdraws from the Intermediate-Range Nuclear Forces (INF) Treaty. The day marks not only a de facto end of the accord, but of the Cold War era of arms control. NATO now needs to ensure that the INF Treaty’s collapse will neither exacerbate NATO-Russia confrontation, nor lead to a destabilizing arms build-up in Europe. Europe could also consider the INF Treaty collapse a trigger for a long-overdue, comprehensive Euro-Atlantic security review.

This landmark agreement eliminated an entire category of conventional and nuclear ground-launched ballistic and cruise missiles with a range between 500 and 5500 km. Curbing miscalculation and providing limited escalation stability, it was once considered a cornerstone of European security.

But following a five year drama, beset with mutual accusations of noncompliance between Washington and Moscow, and little appetite to provide substantive evidence of compliance from either side, the treaty slipped into lip service of its envisioned goal. By now, neither the United States nor Russia seem to bear any interest to its preservation.

NATO, which collectively concluded that Russia had developed and deployed a non-compliant missile system, is now preparing for a world without the treaty.

In this post-INF world, Russia will be free to deploy an unlimited number of INF-range missile systems next to its border with the Western alliance; in doing so, constraining NATO’s freedom of manoeuvre in conflict, or to achieve strategic advantage and force NATO to surrender to Russian demands.

By the 2019 December NATO summit in London, allies are expected to order a feasibility study to examine defense options for protecting against any new non-compliant Russian cruise missile. Designing a response, however, will not be an easy feat. It will require NATO to carefully tailor its deterrence and defense adjustments, and address new threats in an unprovocative and measured way – a highly subjective term.

The United States is likely to set the tone for the intra-alliance discussion. In part, due to it having more time to consider potential responses and a willingness to spend on delivering them. In part, because European allies differ in their approaches, and do not possess appropriate resources for a substantive reaction, at least in the short-term.

What we do know is that only days after its intended withdrawal from the treaty, the US plans to test at least four conventional ground-launched missiles within the INF Treaty-range. Some of these may be available for fielding as soon as at the beginning of 2021. The question remains, however, over where should they be deployed. Washington has not yet held talks with European capitals on hosting new missiles – at least no publicly. Yet such capabilities only make sense if deployed in Europe (and/or Asia, which is another INF-range relevant region). Europeans face the question, therefore, first on whether to host INF-range weapons, and if so, where to station such capabilities. Another consideration will be the terms on which Washington might be willing to support Europe in: Will it want its own deployments, or offer selling and leasing systems to interested European governments?

NATO defense officials are sure to look at NATO’s air and missile defenses. One option is to bolster their ballistic missile defense system to defend against cruise missiles (e.g. by equipping land based Aegis Ashore sites with the Standard Missile-6 interceptor, an option also being considered by Japan). Key elements of which belong to the United States, with Europeans sharing and operating respective command and control assets. Yet re-purposing NATO’s ballistic missile defense system from defending against threats from outside of the Euro-Atlantic to include Russia may be a hard sell to some capitals in the Old Continent; especially those who agreed to join under the explicit condition it would not target Russian capabilities. Adapting NATO’s ballistic missile defenses, therefore, also runs the risk of strengthening Russia’s long-held conviction that this system always was, and continues to be, aimed against it.

Another option would be to augment existing, national cruise missile defense capabilities with new assets. NATO has identified cruise missile threats from as early as the 1990s but for different reasons abstained from focusing on their respective defense capabilities. Consequently, the alliance currently has no collective or comprehensive defense system against ground-launched cruise missiles. While there are not many off-the-shelf systems on sale and existing technology allows for limited defense coverage only, European allies would most likely become the main financial contributor, if they decide to take this path.

Defense planners will also be considering broadening NATO’s deterrence drills. While this is advantageous from the perspective of allied military preparedness and coordination, it remains to be seen if this would add any value to NATO’s existing deterrence efforts, prevent, or indeed, reverse any unwanted Russian behavior.

Another discussion point in Brussels is publicizing the alliance’s nuclear exercises. Such a measure could actually be advantageous, but for reasons beyond deterrence. Military-political openness and a demonstration of intent eases exaggerated threat perceptions, and prevents dangerous misinterpretation.

While NATO’s military-defensive response to the new post-INF threat is legitimate, it is only a superficial ‘patch and mend’ to a major problem: a growing crisis in the Euro-Atlantic amidst global geopolitical shifts. Military remedies will only put off solving critical issues between NATO and Russia, deferring to a later point, and most likely contributing to a costly and potentially dangerous arms build-up in the meantime.

Embracing change as a given, taking lessons learned from previous arms control agreements and acknowledging technological and political developments, Russia and NATO should finally sit at a table to seriously review, fix, amend and expand what is left from the once glorious European security architecture. This also means talking about such irritating issues like ballistic missile defense and non-strategic nuclear weapons in Europe. Only this way, through constructive dialogue can long-term, sustainable, solutions be found. 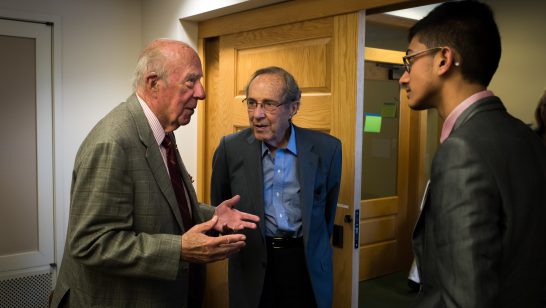 In Memoriam: Lessons on life and diplomacy from US Secretary George P. Shultz

ELN Policy Fellow Sahil Shah offers reflections on his time with the late US Secretary of State George P. Shultz, Cold War veteran and one of the inspirations behind the European Leadership Network.

In a new article for the Heinrich Böll Foundation, Julia Berghofer discusses the threat to nuclear weapons systems coming from cyber attacks.