Since 2014, the EU has shown unprecedented unanimity on sanctions against Russia over the Ukraine crisis. Despite diverging national interests and ranging economic dependencies on Russia, the EU’s 28 Member States have managed to maintain a united policy. While the six monthly renewals may have looked like rubber stamp exercises they have in fact been a struggle between economic interests, geopolitical considerations and normative goals.

The dividing lines between pro and anti-sanctions states are not clear-cut though. Economic dependency on Russia for trade and energy is not sufficient enough to explain Member States’ attitudes towards sanctions. While Greece, Cyprus and Italy are among the least dependant on trade with Russia, they are the most vocal proponents of lifting sanctions. In contrast, Finland, Poland and the Baltic states are the main economic losers of EU-Russia tensions. Nevertheless, they are amongst the strongest advocates of sanctions. The latest EU Summit (22-23 June) showed similar divisions among the countries in the wake of sanctions´ extension.

The aim of this article is to provide a better understanding of which factors impact the EU Member States’ positions. Based on their statements, the article categorises the attitudes into five groups:

Russia-hawks
Germany, the United Kingdom, Sweden, Poland, the Baltic States, Denmark, and Finland are the hard-liners advocating sanctions as a tool to stop Russian aggression and resolve the frozen conflict in Eastern Ukraine.

Aligned with the US position, the UK and Denmark traditionally support a tougher transatlantic stance on Russia. The position of Poland, Sweden, Finland and the Baltic states is driven by geopolitical concerns. Located in Russia’s geographic proximity with negative historical relations, these countries perceive Russia as a security threat and advocate the strengthening of sanctions.

The position of Germany has undergone a drastic change. While in 2013-2014 the position was shaped by Schröder’s “strategic partnership” with Russia, after the downing of the Malaysian MH17 in July 2014, Germany ended its “business as usual” approach. Despite the intertwined economic links and the dominance of Putin-Versteher group, Germany embarked on a leading role in advocating sanctions.

Lukewarm supporters
Although France, Spain, Portugal, the Netherlands and Croatia have (almost) never questioned the effectiveness of sanctions as an EU instrument, they haven’t been strong proponents either. Due to either their geographical distance or considerable economic ties with Russia, their support has been rather lukewarm.

Despite France’s active participation in the Normandy Format, Paris has followed Germany’s first fiddle in the conflict resolution. The traditionally close French-Russian relationship made it hard for Paris to take a tougher stance, as the case with the Mistral warships illustrated.

Spain’s and Portugal’s geographic distance and significant dependency on Russia´s investment in real estate and tourism has resulted in a reserved attitude towards sanctions.

The Netherlands’ position became tougher only after the shooting down of MH17. Having very close economic relationships with Russia – the country is Russia´s third largest trading partner, while the Royal Dutch Shell is a main investor in Russia´s LNG project in Sakhalin and Nord Stream 2 pipeline, the Netherlands were reluctant to strengthen sanctions.

Divided from within
Domestically very divided, the Czech Republic, Slovakia, Slovenia and Bulgaria send ambiguous signals vis-à-vis sanctions. The ambiguity of these countries’ positions arises from the tensions between pro- and anti-sanctions political forces driven either by geopolitical concerns or by business ties with Russia. While one half perceives Russia as an economic partner, the other sees it as a geopolitical threat. The two competing narratives lead to the polarisation of political and business elites, mass media and the public. With significant dependency on trade with Russia or its energy resources, the countries often defend their national interests over the EU’s. This explains incoherent positions. For instance, while Slovakia’s Prime Minister Fico defends national interests and claims that sanctions are disastrous for the country´s economy, President Kiska firmly supports the punitive measures and urges the EU to stay united on Russia, “to ensure that Russia cannot exploit differences between EU countries and break our internal unity”.

Russia’s friends
Italy, Hungary, Greece, Cyprus and Austria are united in their sympathy for Putin’s regime and openly advocate the lifting of sanctions. They traditionally share close political, historical, cultural and religious ties with Russia. All of these countries have held meetings with Putin despite the EU’s informal policy to refrain from any diplomatic events with Russian officials. These countries´ pragmatic approach is explained by their strong economic interests, including the banking and energy sectors and tourism. For example, about 70% of Austrian gas comes from Russia, Russia’s Gazprom was invited to build the Austrian stand of the South Stream project and to invest in domestic infrastructure. Hungary is currently 100% dependent on Russian gas. Budapest’s exposure to Russia was further increased after the government signed deal with Russia’s Rosatom to build two nuclear reactors in the country.

Bystanders
Ireland, Luxemburg, Belgium and Malta have shown no particular support or objection during the EU’s discussion on sanctions. These countries’ low profiles in the discussions can be explained by their geographical distance, weak historical ties, lack of negative experience with Russia and low economic dependency on Russian energy resources.

Conclusions
As each country’s case illustrates, economic factors alone fail to fully explain EU Member States’ attitudes towards sanctions. It is a combination of overlapping historical, cultural, geopolitical and economic factors that shape EU Member States’ positions. By understanding the full range of factors affecting countries´ positioning, EU policy-makers would be better equipped to preserve the EU’s fragile unity. It is especially relevant in light of the Nord Stream 2 launch and the US Senate’s sanctions proposal, where geopolitics and economic interests clash again. While Germany and Austria consider Nord Stream 2 as a purely commercial project, Poland, the Baltic states and the Nordic states strongly oppose it due to EU energy security, Ukraine’s future and environmental issues. The Senate’s proposed bill to sanction any US or foreign firm investing in Russian oil or gas pipelines has further polarised the relations between the US and Germany. Germany´s pivot towards its economic interests will negatively affect the EU´s internal dynamics. As the main driving force behind the EU sanctions, Germany’s preference of its own national interests might discourage other Member States from complying with the EU official position. The German and Austrian opposing joint reaction to the Senate’s draft sanctions might significantly weaken the US’- and the EU’s united response against Russia´s activities in Ukraine.

Experts from both sides of the divide offer their assessments of the damage done to EU-Russia relations by three years of crisis.

The Lasting Legacy of the October Revolution

A hundred years after the Russian Revolution, Ilana Bet-El, Senior Associate Fellow at the ELN, looks at its deep impact and enduring effects in Europe. 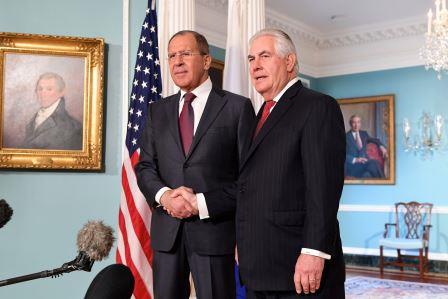