Events of recent weeks seem to offer little hope of narrowing the deep divide between Russia and the Western powers. Moscow’s continuing military support for the Assad regime and the attack on the UN food relief convoy near Aleppo, drawing accusations of war crimes; official Russian confirmation of stationing an Iskander-M missile complex in the Kaliningrad exclave; accusations of Russian breaches of the INF Treaty; the Russian aircraft carrier Admiral Kuznetsov being escorted through the English channel (albeit at a discreet distance) by the Royal Navy; Moscow’s scrapping of the US-Russia Plutonium Management and Disposition Agreement; the Dutch report which blames eastern Ukrainian rebels for shooting down the MH-17 aircraft using a Russian-supplied Buk missile system; and reports of Russian cyber-mischief against Democratic Party officials in the US – all have been extensively reported in the media. UK defence secretary Michael Fallon has argued that Russia must now be regarded as a competitor, not a partner, of the West (somewhat contrary to President Hollande’s statement in July).

Recent speeches by President Putin and foreign minister Lavrov suggest little immediate change in Russia’s foreign policy. There has been speculation that longer-term relations will depend on a Hillary Clinton presidency which – in contrast with Mr Trump’s promise to ‘do a deal’ with his apprentice, Mr Putin – may take a tougher line on Moscow. But given the myriad challenges facing Washington, in the wider Middle East and indeed further afield, and the failure to date to change Russian minds over Ukraine and Syria, what would a tougher line consist of? Scaling up US military support to Poland and Baltics states through the European Reassurance Initiative, effectively sealing a long-term policy of containment and deterrence, would not sit well with some European capitals who want to resolve differences with Moscow (albeit not at any price). Further US sanctions are unlikely to be a game-changer. NATO’s Warsaw summit communique promises an enhanced defence and deterrence posture, while arguably taking quite modest steps in the form of the ‘trip-wire’ Joint Task Force and talking of ‘aspirations for partnership’ with Russia if the latter complies with its international obligations (and is notably silent on Ukraine’s aspirations for NATO membership). Europe’s own pressing challenges – from migration through Brexit and nationalist trends in other countries to economic problems in the Eurozone – leave limited political resources to invest in a Russia strategy that goes beyond sanctions which, reports suggest, have had limited impact on trade flows (and which are being bypassed by some businesses). Indeed, the November 2015 Review of the European Neighbourhood Policy underlined that the EU ‘will take stabilisation as its main political priority’.

Western insistence that Moscow make a volte-face on its policy in Ukraine and its support for the Syrian regime before political relations can be fully resumed is meeting with little success. The Kiev government is resisting calls for what would be unpopular constitutional reform, fearing that elections leading to far-reaching autonomy (or ‘special status’) for the eastern regions would allow them to veto moves towards European integration, effectively limiting Ukraine’s sovereignty. Breaking the Minsk II deadlock will entail compromise so that sanctions on Russia can be removed, as proposed by German foreign minister Steinmeier. But any coherent long-term strategy must balance a viable plan for Ukraine with a viable framework for future European security governance. In his recent speech in Yalta, Putin voiced support for an enhanced OSCE mission to improve security but offered no further positive message. There are no immediate signs that Moscow will reconsider the status of Crimea or its support for Russophone eastern Ukraine. Meanwhile, the political and economic situation in Ukraine remains difficult.

The situation in Syria – the crucible in which a shifting regional political calculus reacts with ethno-confessional divides and societal tensions to wreak such appalling humanitarian damage – is not a proxy war that either Moscow or Washington can control. Putin’s recent statement in Berlin reaffirms Russian support for an ‘inclusive’ political transition as called for in the Geneva 2012 principles that guarantees the security of all groups in Syria while avoiding the country’s fragmentation and mitigating the threat of sectarian violence and terrorism. The prospect for an early settlement of the conflict appears remote. Minimising the damage to US-Russia relations through painstaking diplomacy, which would allow the two sides to negotiate over Syria and any further conflicts in a turbulent region, is the best one can hope for. Russian foreign policy-making is an uneasy balance between defending what Moscow sees as fundamental principles of international relations – sovereign equality and the right of incumbent governments to resist intervention that increases the prospects of regime change – and pushing hard for its perceived security and trade interests.

Julie Newton’s recent article on this site made two key points: many of Moscow’s actions are a response to turbulence and unpredictability in the international environment, which the West is also struggling to deal with; and we must look more closely at Russia’s domestic politics when deciphering foreign policy trends. That Western policy-makers currently draw a blank when attempting to engage Moscow may be more a reflection of divisions within a Russian governing elite fearful of change than of any deep-rooted anti-Western ideology. A deterioration of the situation in Syria and Ukraine may put a further drain on resources, both material and reputational, which carries risks for that elite – not least at home. The demonstrations in Russian cities in 2011-12, and the further closing down of the public political space, seem to have settled down into voter apathy, judging by the recent Duma and regional elections. Russian society values order and stability as a public good. However, fundamental economic challenges that jeopardise the provision of welfare underpinning that stability could well mount up by the time of presidential elections in 2018. Using foreign policy as a tool to mobilise public support for the governing elite brings only short-term tactical gains. Some within the governing elite are open to measures that would improve the economy and secure the kind of longer-term prosperity through trade and investment relations with Western economies that would create an environment for genuine modernisation – something sanctions do nothing to promote.

Uncertainty over Russia’s longer-term policies in Europe justifies NATO’s defence and deterrence posture and the military measures being taken by regional Baltic Sea states to enhance the security of their territories. However, it should also prompt sustained attempts to move from a containment approach towards re-engagement with Moscow. Managing insecurity through the kind of risk reduction and confidence-building measures outlined in a recent ELN report is the key task for the short term, but there must eventually be a return to managing interdependence. The challenge – that none of the parties currently seems prepared for or has the political resources to commit to – is to revive an intellectual framework that builds on the political and institutional engagement of much of the post-Cold War period, including ‘unfreezing’ dialogue at the NATO-Russia Council and pursuing a genuine ‘Helsinki-plus’, to convey a positive-sum message to the international community and publics at large. This may have to wait until after the 2018 Russian presidential elections, but as the new US administration takes office Western leaders should step up efforts to explore the possibilities: no ‘package deals’, but a start on the long road to serious negotiations on collectively legitimised and universally applicable principles to underpin negotiations on arms control and non-proliferation and on resolving the increasing number of global flashpoints. 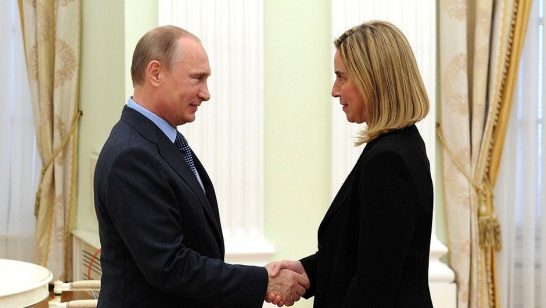 The EU and EEU: geopolitical problems cannot be addressed by technocratic measures

Rilka Dragneva and Kataryna Wolczuk, of Birmingham University, chart the history of the EU’s engagement with post-Soviet integration projects, concluding that Russia-West relations cannot be healed by engagement with the Eurasian Economic Union alone.