Russia’s presumed annexation of Crimea and Moscow’s military moves in the peninsula have turned the turmoil in Ukraine into an international crisis of Cold War proportions. The cost of the crisis to the international system is insidious and one that will probably get worse over time. With the political and military fallout of the confrontation between the US and Russia in the Black Sea and mounting economic sanctions between the West and Russia, the international system is experiencing tremors as a result of Russia’s hostile acts against the territorial integrity and national sovereignty of Ukraine.

Russia’s actions in Crimea have no justification, are illegitimate and therefore unacceptable. Rather, as Janusz Onyszkiewicz mentioned in his piece in the ELN website, what we have witnessed is the repetition of the approach of Russian President Putin that preventive aggression is a legitimate foreign policy instrument.

First, all political actors involved in the crisis should be aware of the fact that the continuing tensions could jeopardize various arms control and nuclear security efforts at both the regional and the global levels. Russia’s rejection of some of the pledges made in the Nuclear Security Summit, held in The Hague on 24-25 March, has deepened this concern.

Second, Russia’s aggressive and unilateralist policy toward Ukraine and Crimea has shaken the current foundations of the international system. There is no doubt that the alleged threat against Russians living in Crimea is no ground for its annexation by Russia. Moreover, Moscow’s approach, favoring Crimea’s secession from Ukraine, has a potential to weaken the stability of the countries with Russian minorities in Eastern Europe and Asia. To put this another way, the pendulum between democracy and security in these countries could oscillate in favor of security.

Despite the presence of ongoing tensions and the likelihood that they may escalate, there is no need to be hopeless with regard to the peaceful solution of the Ukrainian crisis. There are multiple appropriate ways to overcome the current turmoil, and it should be noted that turning Ukraine into a power struggle between the USA and EU on the one side and Russia on the other side would serve only to deepen the turmoil by speeding the ethnic fractionalization in Ukraine itself.

To move things forward from their current position, a number of steps are now necessary.

First, Russia must be persuaded diplomatically that its unjustified intervention into Ukraine and its controversial annexation of Crimea will endanger regional security and stability, not enhance it.

Second, the international community should convince Russia that in the event of safety threats and rights violations against Russian speaking people in Crimea and elsewhere, the rest of the world will not be silent.

Third, the UN should step in to facilitate the implementation of peaceful means mediation, such as dialogue and consultations between Ukraine and Russia. Dialogue between Moscow and Kiev should first aim to eliminate lack of trust between the two countries. Refraining from calls for military measures, which could escalate the tensions in the region, is vital for sustaining a possible dialogue between the conflicting parties.

Fourth, together with the territorial integrity and national sovereignty of Ukraine, the safety and rights of all people, including Russians and Tatars, in the country should be guaranteed and protected.

Fifth, and more widely, talks and negotiations on issues like nuclear security should be insulated from the crisis in Ukraine. This should be done not only for the sake of nuclear security but also to keep vital communication lines between Russia and the West open.

Taking these measures, which also amount to a defence of the basic principles of the international system, such as territorial integrity and national sovereignty, would be fruitful for all actors involved in the conflict and throughout the world. 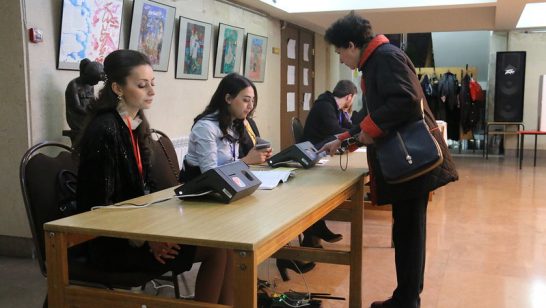 Armenia as a bellwether for the South Caucasus

As Armenia goes to the polls this weekend, Andreas Persbo writes that the election will have implications for the political landscape of the region. But it also represents an opportunity for multilateral cooperation that Brussels, Moscow and Washington should grasp.