Macedonia has been undergoing a durable legitimacy crisis that was further deepened by revelations about a mass wire-tapping scandal and wide-scale anti-government protests. While the scholarly community had doubts about Premier’s Nikola Gruevski for several years now, the abundance of audio-evidence (which has been authenticated) puts us in a position to be firmer in our assessment.

The content of the tapes reveals a comprehensive, deep, and sophisticated system of corrupt and authoritarian rule, while the conversations are marked with profanity, hate speech, slander and ethnic slurs that are unacceptable in everyday communication.

As negotiations about potential solutions of the crisis are under way behind closed doors in Skopje, Strasbourg and Brussels, it is very important that the EU mediators and the wider international community realises that Macedonia’s incumbent government has lost its legitimacy at home, it is increasingly unaccountable and erratic, and poses a threat not only to national, but also to broader regional stability.

The EU mediators should take in account the following four points:

1) Legitimising Gruevski means supporting non-democracy in an EU candidate country, and everywhere else.

Following the revelation of the tapes the Gruevski-led VMRO-DPMNE lacks electoral legitimacy. Gruevski has won three consecutive cycles of early elections through abuse of state resources, control of the media, threat and intimidation of political opponents, and various practices of rigging the popular vote – including ‘importing’ pro-government voters from impoverished areas in neighbouring countries.

By allowing Gruevski and his clique to remain in power, the EU would legitimate a blatantly non-democratic political model. It also risks setting a precedent elsewhere. Gruevski’s rule already serves as an inspiration for other leaders in the region and beyond that are willing and able to override democratic institutions.

According to the official numbers, Macedonia registers small economic growth, but this growth is largely a result of dubious statistics, generated in special economic zones where investors are subsidised by the government, and the profit remains in the hand of a tiny elite, while Macedonia is among the poorest and most unequal countries in Europe. The tapes reveal evidence of the overriding of legal mechanisms when arranging business deals, arbitrary arrangement of public procurements, discussion of personal business plans and ambitions, as well as instances when leading government officials are plotting destruction or takeover of property belonging to political opponents. On the tapes, even ministers in the government talk of how the economy is heading towards the abyss and how they have to manipulate the numbers in order to save their seats. As one of them sighs, ‘one day we will go to prison for all this.’

Considering the centrality of the rule of law and economic governance in the EU’s approach towards the Western Balkans, it must stop treating Gruevski as a reformer, and treat him like many Macedonian people do – as a fraudster and an authoritarian leader. While Macedonia is not another Greece in the making, its eventual economic collapse would still have a devastating effect. It is important to act in a timely manner in order to avoid a potential humanitarian crisis. Roughly 5% of the population now also holds Bulgarian citizenship, more than 10% of the population emigrated in the past 15 years, while the number of those who file for asylum in the EU is growing every day. Should Gruevski and his clique remain in power, these numbers will undoubtedly rise.

3. Legitimising Gruevski means supporting a source of instability in the region and beyond.

Over the course of his rule, Gruevski has had a track record of staging or taking advantage of pre-existing tensions within the country and the region, which have affected not only national, but also regional stability. Gruevski’s turn to authoritarian rule has served as an excuse by Greece to deflect pressure on the infamous name issue – which he himself re-opened and exacerbated. Although on some of the tapes, Gruevski and his aides seem ready to make a bargain for the name dispute, in the domestic debate he has attempted to portray himself as a ‘saviour of the name and the national identity’ and orchestrated a smear campaign against those who argued compromise is necessary.

Gruevski’s stubborn nationalism has also at times raised tensions with other neighbouring countries, in particular Bulgaria. The Gruevski government has been equally irresponsible about domestic politics as well. Having a largely passive Albanian coalition partner since 2008 – the Democratic Union for Integration led by Ali Ahmeti – Gruevski has devised a policy of stirring ethnic tensions at will, using it as an excuse for organizing snap polls in 2011 and 2014. In the most recent crisis Gruevski tried and failed to play both the Greek and the Albanian card, so he resorted to a novel nationalist narrative – about the global conspiracy for dismantling Macedonian nationhood. This has been accompanied by an attempted foreign policy shift towards Russia – which by now seems a failed PR stunt. However, the violence in Kumanovo—the circumstances are suspicious, but the exact chain of events remains unclear—highlights the risk of violence associated with the current government.

4. Legitimizing Gruevski means letting down the civic movement – both the streams that are in the opposition camp and outside of it – which demand his resignation.

Over the last several years, Macedonia’s political culture has undergone a profound change. While the confidence in the ruling party and in the institutions of the system has declined, the main opposition party has not managed to garner significant support. However, in recent years, a growing number of citizens have begun to be otherwise politically engaged, participating in protests, civic initiatives and social movements. The peak of the grassroots mobilization occurred in late 2014 and early 2015, when a nascent student movement had also inspired others that managed to expose Gruevski. A broader civic movement erupted on May 5, when thousands of citizens gathered in front of the government asking for resignation of the government. Met with excessive use of force, they embarked on daily self-organized protests and marches that spread across the country and diaspora.

Part of the civil society organizations and initiatives that have been on the streets for months have joined forces with the opposition SDSM in the coalition “Citizens for Macedonia”, and have established a camp in front of the government headquarters. Other movements, primarily comprised of grassroots activists, the emerging Left, and self-organized citizens, have remained outside the opposition camp, undertaking guerrilla actions, protest marches and remaining a loud non-aligned anti-Gruevski voice, identifying themselves with the social media hashtag #Protestiram (“I protest” – first person singular). Whereas there is now a tangible distinction between the two forces, they act as complementary actors under the consensus that Gruevski needs to go.

The movements have spontaneously slowed their pace once the negotiations have been opened, though they refused to just remain on the sidelines. By doing so, they have consciously given way for a top-down solution of the crisis – in which, however, they remain stake-holders. Should Gruevski remain in power, the government would be likely to resume its repressive policies towards these movements. Moreover, if Gruevski is being legitimized by the EU, there is a risk that much of the anger of what is an open-minded group of people, might end up further disillusioned with European politics. Hence, the EU mediators need to realize that these social movements are their allies—supporters of an open, tolerant country that wants to join the EU and become more democratic.  Ignoring them will mean losing a key pillar for change in the country.

In conclusion, we underline that Macedonia’s government is no longer legitimate and has to resign as a first step for rehabilitation of the country’s devastated institutions and economic system.  The EU is in a difficult position, its bargaining power is limited in Macedonia and its interlocutor, Nikola Gruevski has a lot to lose: for him, losing control over government is likely to land him in jail. However, the EU must not force the country into an unsavoury deal just to declare a short-term success. The solution in favour of both the EU and the democratic forces in the country is a transitional government that curbs Gruevski’s access to institutional and extra-institutional power, and immediately and impartially investigates the evidence of grand corruption.

No, Germany hasn’t turned its back on the European project

Sylke Tempel argues that a Germany that cares about the rules, but also takes criticism into account, can hardly be called anti-European.

EU, Ukraine, and Russia: A Perspective from Finland

Tarja Cronberg highlights that escalation in Ukraine has raised the stakes for European leaders and argues the EU must take a consistent and pro-active stand if it is to remain a leading actor on the European continent in the 21st century. 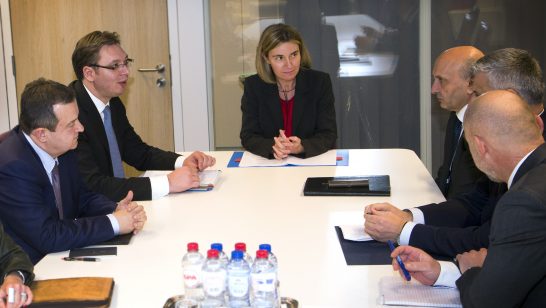