Was the Warsaw NATO summit substantially different from any other NATO summits that had been held before?

I think NATO had to change the way it operated very significantly after 2014. The summit in Newport, which took place that year, was basically about adapting NATO to the Ukraine crisis as an emergency, whereas in Warsaw we are talking about a more permanent change. And the change is particularly visible towards Russia and towards the so-called Eastern flank, when we see a major strengthening of deterrence and defense potential of the alliance. Of course, there are also developments on the Southern flank, which were reflected in NATO Summit communique, but the role of NATO in the South to deal with terrorists or migration is much less clear than in the East.

What are the possible implications — are we going to have a new Cold War?

At this point, it’s important to see the results of Warsaw summit as a clear signal that NATO is serious about Article 5, which is about the defense of its members. The deployment of multilateral land forces in the Baltic states and Poland is the clearest indication that this is a serious issue for NATO.

At the same time, the military posture of NATO remains restrained. You see a limited number of soldiers deployed along the Eastern flank. But you didn’t see any major changes to the nuclear posture, and you didn’t see redirecting missile defense towards Russia. There is also an offer of dialogue to Moscow on crisis management. NATO is not preparing for a new Cold War, NATO is showing that it is ready to stabilize the security situation, if Russia is also ready to stabilize it.

Is there a potential for dialogue?

There is a potential for dialogue on limited issues. NATO is very clear that it remains critical of Russian actions, that there is no going back to this famous “business as usual”. But at the same time, during this time of confrontation, we can have dialogue as to how to make this confrontation more secure to avoid misunderstandings and incidents, as well as gradually start to work with each other. However, this summit shows very clearly that cooperation between NATO and Russia is not possible in the current circumstances.

Russian experts are talking about minor member states also starting to make decisions, not only the US. What do you think about it?

There was a high degree of unity of NATO displayed at this summit. And every single member signed up to these decisions taken in Warsaw.

And I would especially highlight the role of countries like Germany and France. Germany is sending its troops to Lithuania as part of this multilateral battalion, and France also indicated that it would send a company to one of the Baltic states. This view that I sometimes get from the Russian media that NATO has a very small number of hawkish states while the rest are much friendlier towards Russia is oversimplified. All the countries have agreed that much more needs to be done to strengthen deterrence. This signal should be noticed in Russia.

Still, there is no agreement about what to do next. Some of the more hawkish countries are saying that this should be just a starting point and NATO should strengthen the deterrence even more. However, I think that a majority of NATO countries are signaling that they are ready to fulfill the Warsaw package, but not necessarily move beyond it, because they currently don’t see the necessity to do so. Unless Russia forces NATO to do more, the Alliance would be glad to just stick to the agenda agreed in Warsaw.

This interview was originally published by the Russian International Affairs Council.

Confidence Building Measures Are Now Needed More Than Ever

In a new op-ed Wolfgang Ischinger, Steven Pifer, and Andrei Zagorski argue that pre-existing arms controls have helped prevent the Ukraine crisis from degenerating from bad to worse. 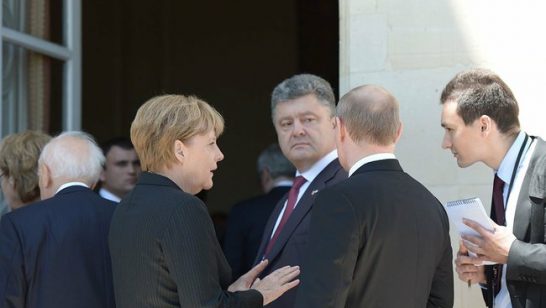