On 10 November 2014, the ELN published a report detailing specific incidents of encounters involving the armed forces of NATO and its partners, and the Russian Federation since March 2014. This was followed by an update on 15 December 2014. Against the backdrop of further violence in Eastern Ukraine and broader hostile rhetoric, these incidents have continued.

Since the initial publication of the report until early March 2015, we have identified 27 new incidents:

Two new incidents that we have categorised as ‘serious’, being of a more aggressive or unusually provocative nature than others and bringing a higher risk of escalation.

We have also logged 25 new ‘near-routine’ incidents. These have included:

The total numbers of incidents logged by the ELN since our monitoring began now stand at 3 ‘high risk’ incidents (6), 13 ‘serious’ incidents, and 50 ‘near-routine’ incidents. That brings an overall total to 66 incidents identifiable from public sources. The full list of incidents can be found here.

The new incidents highlighted in this update serve to show the confrontation potential of close Russia-NATO military encounters. The actions of Russian fighter-bombers based in Crimea are a good illustration. Su-30 and Su-24 bombers have been reportedly not only conducting monitoring of NATO warships, specifically the American USS Vicksburg and Turkey’s The Turgut Reis frigate in the Black Sea, but also exercised operating within their anti-aircraft defence zone. This will primarily be in order to collect electronic intelligence relating to the ships’ defence systems and response times, but such actions risk provoking a more proactive defensive response from the captains of these ships should they feel endangered, while there are not sufficient dialogue mechanisms in place to manage the fall-out from a possible shoot down of a Russian aircraft.

The findings of the original Brinkmanship Report vindicated by official data

Following the publication of the original ELN report, both NATO and Russia have released statements relating to the number and nature of military encounters in 2014, providing a broader context within which the specific incidents mapped by the ELN can be assessed. NATO has claimed that alliance aircraft conducted over 400 interceptions of Russian warplanes in 2014, of which 150 were conducted by the Baltic Air Policing Mission. This represents an increase by a factor of four compared to 2013.

Statements from Russian representatives affirm that 200 reconnaissance sorties were conducted by the Russian Air Force over the Baltic in 2014, up from 125 in 2013. Furthermore, Russian sources claim that NATO reconnaissance flights over the Baltic States, the Baltic Sea, and the Barents Sea, now number between 8 and 12 sorties a week; and the total number of NATO tactical aviation flights near the Russian and Belarusian borders reached 3,000 in 2014, double that of 2013.

These increases reflect the fact that both NATO and Russia have moved significant air assets into closer proximity to each other. NATO has reinforced the Baltic Air Policing Mission and operated AWACS aircraft out of bases in Poland and Romania, whilst Russia has moved modern combat aircraft into bases in Crimea following the peninsula’s annexation and increased the number of its Long Range Aviation flights. Some of these deployments, and the flights that emanate from them, are primarily geared towards the gathering of electronic intelligence (ELINT) relating to air defence surveillance radars, fighter and bomber radars, and C3 (command, control, communications) arrangements. But flights by Russian Tu-95 (“Bear”) bombers seem also intended to send a political message about Russian military’s ability to operate against NATO allies situated in Western Europe and North America.

As was highlighted in the original report, the ever increasing intensity of these intelligence-gathering flights has begun to pose a serious threat to civilian aviation. The fact that these flights operate without transponders broadcasting their position or liaising with civilian air traffic control (they are still visible to primary radar used by the military, which can share the data with civilian authorities, but this data does not include altitude information) makes the problem especially acute. This threat from Russian aircraft has been highlighted by officials from NATO and European states. It should be noted that Russia maintains that NATO aircraft flying along its borders have their transponders turned off as well.

Such a review has apparently not taken place, although Russia has made visible efforts to explain and justify its actions and respond to its critics. It also provided more information on some exercise activities and its long range aviation flights.

Moscow still seems to consider that this aspect of its military activities serves Russia’s political agenda. Looking at the debate at the NATO level and in particular countries where the close flights of Russian aircraft have become a live issue of debate, the opposite seems to be the case – they provide arguments for pursuing a tough policy line against Russia, increasing defence budgets and extending NATO’s defence and interdiction capabilities.

There now seems to be a wider understanding on the NATO side that military-to-military channels of communication with Russia need to be kept open despite suspension of wider mil-to-mil cooperation. We can assume that avoidance of dangerous incidents has been discussed in-depth within NATO and also in recent meetings between NATO Secretary General and Russian Permanent Representative to NATO and Russian Minister of Foreign Affairs. Questions remain however over whether existing communication channels would be sufficient during an actual crisis.

The report argued that both sites should be ready to exercise political and military restraint and review the rules of engagement in military encounters to decrease the chances of unintended escalation. On the positive side, it seems that most of the near-routine encounters are now handled according to procedures which minimise the risk of accident. But the new serious incidents listed in the update demonstrate that it is not always the case. It is also worrying that military deployments and exercises along the joint NATO-Russia border proceed on what appears to be a self-perpetuating cycle of action-reaction.

Preparing for the Worst: Are Russian and NATO Military Exercises Making War in Europe more Likely?

A new ELN policy brief explains why an action-reaction exercise cycle is concerning, and what needs to be done about it. 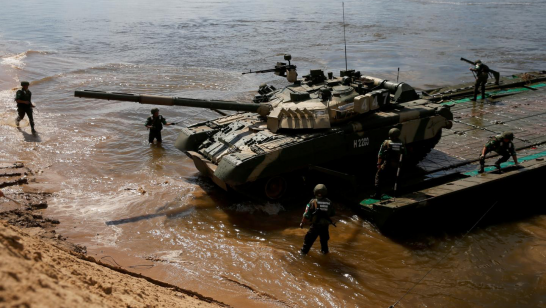