Six years ago, Russia adopted an ambitious national strategy for the Arctic region. The strategy was aimed at turning the region into a strategic resource base for the Russian Federation by 2020, and at preserving the country’s role as a leading Arctic power. The implementation of the strategy has been accompanied by a gradual increase in Russia’s military activity in the Arctic. Russia’s naval presence in the northern waters is higher today than it was in the 1990s and early 2000s, on the surface as well as under water, and Russia has since August 2007 conducted numerous long-range bomber flights in the international airspace over the Barents Sea, the Greenland Sea, and other parts of the Arctic. In Russia, this activity is largely seen as a “response” to measures taken by the other Arctic coastal states, all four of which happen to be NATO members.

The four other Arctic coastal states – Canada, the United States, Denmark, and Norway – are following developments in the Russian Arctic with a heightened sense of awareness. Like Russia, the four attach considerable importance to their economic and national security interests in the region, as reflected in their Arctic/Northern/High North strategies, adopted in 2006–2011. Some are concerned that the growing industrial and commercial activity in the Arctic (ship traffic, petroleum activities, fisheries, cruise tourism etc.) may have adverse impacts on the environment, particularly in the event of a large oil spill. Others are concerned that disagreements over borders and jurisdiction may lead to a deterioration of interstate relationships in the region. Still others are concerned that the renewed international interest in Arctic affairs, among Arctic as well as non-Arctic states, will lead to an incremental militarization of the region, and that this may eventually undermine the political and military stability that currently characterizes the circumpolar Arctic.

As of today, Russia and the other Arctic coastal states do not seem to have a proper forum where they can discuss military security issues and concerns related to the Arctic. Russia is neither a NATO member nor part of the Western security community. The NATO-Russia Council has so far not been able to serve as an arena for NATO-Russia dialogue on Arctic security. The same goes for the Arctic Council, which is not seen by either party as a forum in which “hard” (military) security issues can or should be discussed. Russian-Western relations in the Arctic are still marked by a largely lacking sense of trust and confidence. On top of that, recent developments in Ukraine’s Crimea region are likely to have a negative impact on Russia’s relations with the EU and NATO, at least for some time.

Russian policymakers and media have in recent years had a tendency to portray any foreign military activity in the Arctic as hostile and provocative, even when such activity takes place well outside the country’s territorial waters or airspace and does not infringe on recognized Russian rights. The Russians are concerned that foreign state or non-state actors may try to take control of natural resources and/or shipping lanes rightfully belonging to the Russian Federation. According to a recent statement by Nikolai Patrushev, Secretary of the Russian Security Council, the United States, Norway, Denmark, and Canada are pursuing “a common and coordinated policy aimed at denying Russia access to the riches of the Arctic continental shelf”. In a somewhat similar manner, Canada’s Prime Minister, Stephen Harper, has stated on several occasions that his country faces “increasingly aggressive Russian actions”, necessitating adequate defensive measures.

Obviously, statements such as the ones cited above are often intended for domestic audiences and should not necessarily be taken at face value. At the same time, there are many indications that the security concerns are genuine, and that fear is a factor in Arctic politics also in 2014. Many Arctic states are concerned that their neighbors or outside actors may attempt to infringe on their rights and interests, including the access to natural resources or shipping lanes of considerable value to their national economies. None of the states that surround the Arctic Ocean exclude the possibility of interstate disputes in the region, and none of them are willing to rely on anyone except themselves to protect their northern maritime borders, sovereignty, and sovereign rights.

For Russia as well as for other Arctic rim states, the stakes are undoubtedly high. It is estimated that some 30 per cent of the world’s undiscovered reserves of natural gas, and 13 per cent of the undiscovered reserves of oil, are located north of the Arctic Circle. Among the areas specified for future development are Russia’s Yamal Peninsula in northwestern Siberia and the continental shelf in the Barents and Kara Seas. In a more distant future, petroleum operations in areas further north and east may become a reality. Russia will soon claim ownership to a shelf area of 1.2 million square kilometers (460,000 square miles) between the outer limits of the country’s current 200-nautical-mile economic zone and the North Pole. Efforts are also taken to facilitate an increase in ship traffic along the northern coast of the Eurasian continent. The annual number of passages along this northern waterway is still fairly modest (71 in 2013), but cargo volumes are growing year by year.

The Arctic coastal states’ security concerns on the northern frontier are shaped not only by the region’s emerging role as an arena for economic and industrial activity, but also by the region’s place in the nuclear deterrence strategies of Russia and the United States. During the Cold War, the Soviet Union and the United States developed long-range nuclear weapons that could be launched across the Arctic Ocean, either from locations on land, from the sea, or from the air. The number of deployed warheads has been reduced significantly since then, but all elements of the nuclear triads are still in operation and thus relevant to the security situation in the region. The weapons have also become more sophisticated, most notably with the development of land- and sea-based anti-ballistic missile (ABM) systems, particularly after the collapse of the ABM Treaty regime in the early 2000s. The latter development is likely to remain a source of contention between the United States and Russia, which sees sea-based ABM systems as a potential threat to its nuclear deterrent in the Arctic.

When developing strategies to cope with future threats that might arise, security analysts have a tendency to “assume the worst”, that is, scenarios that do not necessarily reflect the current state of affairs. Not knowing the (future) intentions of their neighbors or outside actors, they are afraid to risk shortfalls in military capability, and may therefore chose to “play it safe”. Based on their own interpretation of other actors’ intentions and military potential, they may advocate measures to strengthen domestic military capabilities. Once implemented, these measures may be perceived by other states as potentially threatening, and lead to military or other counter-measures. In the International Relations literature, this phenomenon is often referred to as “the security dilemma”.

To the extent that there is a nascent security dilemma in the Arctic, it is not unmanageable. It may not be overcome in the short run, but its negative effects may hopefully be ameliorated through various confidence-building measures, NATO-Russia dialogue on Arctic security, strengthening of the Arctic governance system, and the settlement of jurisdiction issues. The Norwegian-Russian Treaty on Delimitation and Cooperation in the Barents Sea and the Arctic Ocean, signed in April 2010, may perhaps serve as a model for the settlement of other boundary and jurisdiction disputes in the Arctic. The conclusion of an Arctic Search and Rescue Agreement, signed in May 2011 by all of the Arctic Council’s eight member states, is another promising development. Through enhanced cooperation and transparency at the regional level, the states that surround the Arctic Ocean can build mutual trust and lay the foundations for a genuine security community in the northern part of the globe.

The nuclearisation of the Russian Arctic: new reactors, new risks

Sherri Goodman and Katarina Kertysova explore the growing risks of nuclear incidents in the Russian Arctic and propose concrete transparency and confidence-building measures to limit them. 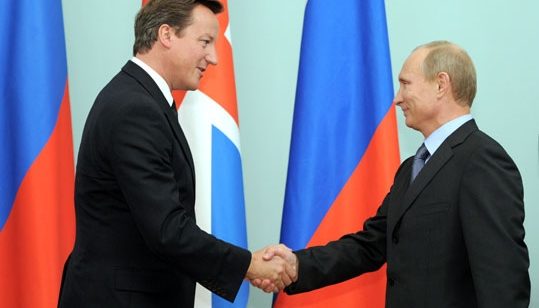 Is Brexit really in Russia’s interest?

With many commentators in Europe arguing that Russia and President Putin want a Brexit, the European Leadership Network has invited Russian experts to give their perspectives.

After Sanctions: What Next?

Ian Kearns argues that the West needs a response to the crisis in Ukraine beyond sanctions. While we must avoid a military confrontation with Russia, the West must find a way to bring Putin to the negotiating table on terms that are acceptable for both sides.