On 25 October, 2015 the Ukrainian people cast their vote for the first time since the decentralisation reforms which established a new governance structure across Ukraine. In November, 2015 the second round of the local elections took place with twenty nine cities and towns electing mayors and regional councillors in all regions apart from the Donbass. Later that month, on 29 November the people in Mariupol and Krasnoarmiysk chose their mayors. [1] Their vote marked the end of the local elections process in Ukraine in 2015.

There were no elections in the separatist-controlled areas in the Donbass. As a result of the negotiations of the Normandy Group and upon its recommendation, the separatist leaders of the Donetsk People’s Republic (DPR) and the Luhansk People’s Republic (LPR) postponed their plans to hold elections independent of those organised by the Ukrainian state. Further, they agreed to respect the terms of the Minsk II plan and hold elections in the Donbass according to Ukrainian law.

Yet the way in which the elections were held in the rest of Ukraine has serious implications for the future of the Donbass and the Minsk II process.

The preliminary assessment of the first election round prepared by the OSCE Office for Democratic Institutions and Human Rights (OSCE/ODIHR) concluded that the monitors witnessed a ‘competitive, well organized … campaign [that] generally showed respect for the democratic process’. However, their report also presented details revealing that these were not entirely free and fair elections. This was for primarily three reasons.

First, the legitimacy of the elections was called into question because internally displaced people (IDPs) were unable to take part. This issue was highlighted by the ODIHR in relation to several groups who could not vote.

Second, issues with the registration process for prospective candidates, inaccurate ballot papers and allegations of misconduct plagued the election process. Specifically, misinformation about the technicalities of the vote characterised the preparation stage preventing some candidates from registering to stand in the election. Public confidence and trust in the process were also undermined after the elections in Mariupol were postponed due to objections to the integrity of the ballot papers. Similarly, the vote in Krasnoarmiysk was delayed after it was revealed that bulletin posters were prepared illegally. Mayoral candidates in Kirovohrad, Kyiv and Mykolaiv were also accused of buying votes and breaching the electoral code of conduct.

Third, and most problematically, despite ample evidence of the inadequacy of the current legislation on campaign funding no action was taken against the contributions and sponsorship of campaigns by oligarchs and wealthy donors. This activity is pervasive in Ukraine and undermines most efforts to establish the principles of good governance.

None of these issues are easily resolved. Yet, under the terms of the Minsk II agreement, the modalities of the Donbass elections should be agreed in consultation between the government in Kyiv and representatives of the separatist regions. The elections should be organised in line with Ukrainian law and monitored by international observers. Therefore, identifying the procedural problems in the Ukrainian election processes is crucial for organising the elections in DPR and the LPR.

What is more, if the elections in the DPR and the LPR do take place this spring (which, judging by the most recent Normandy group discussions, is the expectation), without these problems being addressed, the problems are likely to be exacerbated by the prevailing security challenges. Pressing Ukraine to hold elections in the DPR and the LPR without necessarily meeting the OSCE/ ODIHR standards will also suit the interests of the separatists and Russia. A less rigorous election observation process would make it easier for the separatist leadership to abuse the procedures and solidify their power.

If Kyiv clearly demonstrates constructive engagement on the preparation of these elections, this may make it more difficult for the West to point to the deficiencies of the October elections and insist that the rules for Donbass elections can be loosened further. [2] More importantly, it would limit the opportunities for the separatists to object to the proposed manner in which the elections would be held. In a recent video conference Russia’s Ambassador to the OSCE, Alexander Lukashevich, voiced the opinion that, given the procedural flaws, the Ukrainian election process should not be automatically applied to Donbass and elections under the current law are ‘unacceptable’.

Even though Kyiv faces the difficult task of convincing the electorate, particularly in western Ukraine, that it is defending the country’s interests by engaging in the Donbass election process, ultimately this is at present the best course of action. It could lead to the finalisation of the Minsk process through the restoration of the Ukrainian government’s control over the border and the complete withdrawal of heavy weapons. Neither Ukraine, nor its allies are prepared to resolve the conflict by military means. Hence, a political settlement, with the local elections a constitutive part of this settlement, remains the only viable option for the end of hostilities.

Convincing Ukraine’s backers in the West that fair elections are possible will however require serious commitment, not to mention considerable political effort in resolving the problems highlighted during the recent local elections.

[1] The mayoral elections in both cities were postponed to 29 November rather than taking place on the announced date of 15 November. In Mariupol the local commission delayed the vote due to inaccurate ballot papers: http://www.bloomberg.com/news/articles/2015-10-25/ukraine-s-mariupol-local-election-delayed-by-flawed-ballots whereas in Krasnoarmiysk the posters did not meet electoral standards: http://www.kyivpost.com/content/politics/court-stops-election-in-krasnoarmiysk-rules-ballots-printed-illegally-400629.html.

[2] In September 2015, the German Foreign Minister said that elections in the Donbass would be held on a ‘joint legal basis’. By contrast, the Minsk II agreement only stipulates these elections should be held according to ‘the law of Ukraine’: http://www.aljazeera.com/news/2015/09/resolving-ukraine-conflict-150913050855537.html.

Mathieu Boulègue, security analyst in the field of Eurasian affairs, argues that the situation in Eastern Ukraine has been stalling since the signature of the Minsk 2 ceasefire agreement, and offers his thoughts on the future of the conflict. 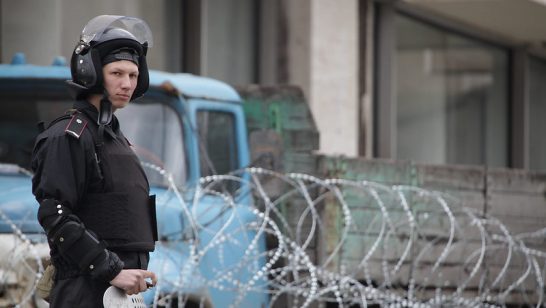