The next German government would do well to further strengthen the transatlantic alliance. With the Conservatives (CDU) very likely being the senior partner of the next German coalition government it is probable that Berlin will continue implementing NATO’s Wales (2014) and Warsaw (2016) decisions in reaction to Russia’s increasingly revanchist policy towards its claimed spheres of influence. Berlin has rightly been coined the (European) backbone of these defensive measures seeing as it participates in short-term as well as strategic reactions to the crisis year 2014.

After all, one of NATO’s major collective defense components, the Very High Readiness Joint Task Force (VJTF), was in large parts initiated by Germany, both conceptually and practically. Under Chancellor Angela Merkel and defense minister Ursula von der Leyen (both CDU), Germany decided to provide up to eight brigades for NATO’s Response Forces, including the VJTF. In addition, the German armed forces are serving as one of four lead nations of a multinational battalion-sized battlegroup in Lithuania since January 2017.

Beyond these very concrete steps, strategically more far-reaching goals should be pursued by another Conservative-led administration in support of the transatlantic alliance. This includes gradually pursuing NATO’s goal of spending 2% of one’s GDP on defense. Additional funds are urgently needed to invest in critical capabilities such as reconnaissance, aerial refueling and helicopters – most of these capabilities, among others, are currently provided by the United States in a NATO context.

In addition, the next German administration would be well-advised to put more energy into shaping NATO’s agenda beyond the current reassurance and deterrence measures. Thus, Berlin should promote formulating a new Strategic Concept (the current one is from 2010) to account for the dramatic shifts in transatlantic security since 2014.

Firstly, this process could be used to reiterate the Wales and Warsaw communiques and insert into the most important strategic document of the Alliance that Russia no longer is a “partner” of NATO and should be treated accordingly. While dialogue avenues should not be foreclosed readily, the Alliance must come to terms with the circumstance that Russia will remain on the offensive in the foreseeable future.

Thus, not only should NATO’s current deterrence posture be maintained, contemplating an expansion of measures in place is in order, too. This could mean an increase of the four battalion-sized battlegroups up to brigade-sized military formations rotating through the Baltic Republics and Poland – regardless of the 1997 NATO-Russia Founding Act which is unfoundedly treated by Germany as a sacrosanct item. The spirit of the legally non-binding agreement has been killed by Russia, not by NATO. In addition, the document specifically allows for changes in force deployments in case of a changed security environment which, beyond doubt, has materialized in the wake of 2014. While Germany should not promote the dissolution of the Founding Act altogether, pondering on additional deterrence measures should not be blocked because of disproportionate thoughtfulness towards the Kremlin.

Secondly, with Brexit looming, Germany could use a new Strategic Concept as a chance to further relations between NATO and the EU. While tightening necessary cooperation between these two bodies, Berlin should leave no doubt that NATO must not be supplanted but only supplemented by the EU’s CSDP, however. As it currently stands, the transatlantic Alliance is the more effective defense organization and will be in the future so long as the Americans remain part of NATO – insisting on US participation in the Alliance must be a premium security and defense goal of Germany. To keep the current occupant of the White House interested in NATO, Berlin should galvanize its European partners to contribute more to the Alliance’s deterrence posture. As a lead nation in this regard, Germany could propose to replace the Canadian and eventually the American battalion, respectively, with European partners in Latvia and Poland.

Finally, and tying in with the first point, Berlin could use the updating of the current Strategic Concept to come to terms with why and how NATO must be a nuclear alliance so long as these weapons exist – an exercise Germany is unnecessarily and perpetually shying away from. Russia’s increased reliance on nuclear messaging calls for a serious rethink of how to adapt the Alliance’s non-conventional posture. Germany can contribute to this debate by starting to consider a replacement for the already 30-year old Dual-Capable Aircraft (Tornados) which are part of the Alliance’s nuclear-sharing arrangement. Berlin should also be more open-minded about extending this procedure to other European non-nuclear states in order to increase NATO’s nuclear deterrence effect, especially vis-à-vis Russia.

Why we should work towards a stable and secure Europe

In the third piece in our series on the 2017 German election, ELN member MEP David McAllister sets out the CDU vision for the future of Europe.

For a European Defence Union

In our second piece on the German election, Thomas Oppermann MdB sets out the defence policy of the Social Democrats 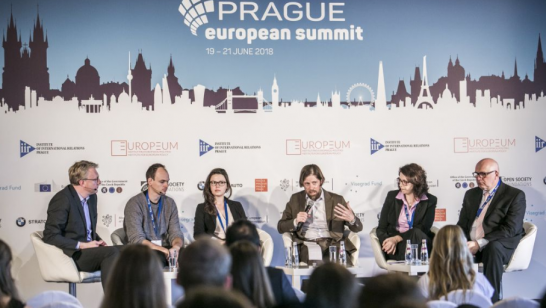 ELN Policy Fellow Alice Billon-Galland participated in the Prague European Summit 2018, speaking at a panel on “European Defence Cooperation: A Symbol of the Future of European Integration?”