This piece is part of a new ELN series on the P5 Process exploring national viewpoints from the five nuclear-weapon states ahead of the NPT Review Conference.

At Lancaster House on the 12-13th February 2020, the United Kingdom chaired the ninth ‘P5 Process’ conference, attended by high-level representatives from the capitals of the five Nuclear Weapon States (NWS) recognised under the Non-Proliferation Treaty, and, at least for some of the meeting, a constellation of Non-Nuclear Weapon State (NNWS) representatives, UN officials, and civil society participants.

Distrust and geopolitical differences were apparent, notably with respect to the Trump Administration’s recent position that any further arms control with Russia must also involve China. Nevertheless, the subsequent UK statement implied that the closed meeting was useful in other ways, allowing for preparatory discussions on the upcoming NPT Review Conference (RevCon) – now postponed by the COVID-19 pandemic – among many other issues.

The breadth of the topics and the conference’s wide civil society participation demonstrates just how much the Process has evolved significantly since its inception. Founded in 2009 by the UK’s Labour Government, under the leadership of then-Defence Minister Lord Browne of Ladyton, the conferences were initially intended only to convene the P5 nuclear laboratories for technical discussions on nuclear disarmament in advance of the 2010 NPT RevCon. Over time its remit has expanded, and the Process has taken an increasingly prominent role in the management of NWS relations and the reduction of global nuclear weapons stockpiles. A decade on, now is a good time to ask whether the P5 Process has lived up to the UK’s expectations.

As coordinator of the P5 Process over 2019-2020, the United Kingdom has sought to continue the recognised good work of China over the preceding year and marshal the P5 contribution to the NPT RevCon. This is a slot in the chairing rota that the United Kingdom reportedly enjoys holding. While maintaining its neutrality as conference coordinator, the United Kingdom understands itself to play a bridge-building and agenda-setting role within the Process, mediating fundamental disagreements between the larger nuclear weapon states, and fostering a culture of within the grouping, as seen in its engagement with the BASIC-ICCS Programme on Nuclear Responsibilities.

Over the last year this has predominantly meant maintaining the Process’ five current work strands, on:

Dialogue on nuclear policy and doctrine is perhaps the most widely cited of these by British officials, contributing to the UK’s nuclear risk reduction agenda as it does by illuminating and helping harmonise divergent understandings of common terms. One story tells of the realisation within the group that the phrase ‘escalation management’, which when used in British English is intended to imply the whole ladder of escalation (including the many rungs up to nuclear use), tends to imply to the Russian ear only the rungs after nuclear use. Clarifying this distinction was, therefore, important to mitigate the risk of linguistic misperceptions in a crisis. Even more so, officials draw attention to the benefits of excavating the meaning of written doctrines through systematic question and answer sessions, intended to ensure each side understands and demonstrates ‘security dilemma sensibility’ both the letter and also the spirit of their adversaries’ doctrines.

Among these five work strands are other ongoing discussions chaired by different members. As stated by Baroness Goldie in the closing remarks of the London conference, the UK has been ‘leading by example’ on transparency and reporting, ‘not because we want to be a goody-two-shoes, but because we hope [others] will follow’. The conference itself touched on wider nuclear topics, including nuclear risk reduction, non-proliferation, the Treaty on the Prohibition of Nuclear Weapons, Iran, North Korea, the Middle East Weapons of Mass Destruction-Free Zone, and the IAEA.

Under British leadership, the participation of those beyond the NWS has certainly broadened. To engage NNWS, the United Kingdom held consultations with the Non-Proliferation and Disarmament Initiative (NPDI), a diverse NPT grouping of 12 non-possessor states founded to maintain progress on the 2010 64-Point Action Plan. To engage civil society, CPACC funded two British non-governmental organisations – King’s College London and the European Leadership Network – to implement the open portion of the main conference and host a ‘next generation’ side event in the day preceding the conference, at which spoke two of my colleagues at BASIC, Marion Messmer and Sophie McCormack. Events like these helped provide evidence to British claims to being a ‘champion’ or ‘leader’ of transparency-building measures.

The main deliverables of the London conference, initially intended to be presented at the now-postponed RevCon, are yet to be seen. It is unclear whether these will be held back until next year or released sooner. What these deliverables will be is not known, but based on statements made in the public portion of the February conference it looks as though they might include a restatement of negative security assurances (NSAs) by all five states; a follow-up edition of the 2013 P5 Glossary of Key Nuclear Terms; and, a clearer understanding of how the P5 understand of nuclear risk reduction, that could set the framework for future substantive discussions on this theme.

There is some doubt as to whether the United Kingdom will continue to act as coordinator until the postponed RevCon or whether France will take over as planned after May 2020. This would put France in the unenviable position of having to pivot its planning to meet the new NPT timetable, and if so, one would expect it to maintain the existing work strands for now.

Nevertheless, while certain topics like strategic risk reduction would appear to merit a permanent position on the agenda – so fundamental as this issue is to the maintenance of international security – the inherent flexibility built into the P5 Process’ agenda is its strength. This helps it adapt to present issues and prevents it from falling into the trap of the Conference on Disarmament, ensnared by its mandate on the same issues for nearly a quarter of a century.

The challenge of the P5 Process is to keep its dialogue open in spite of stark disagreements. The hiatus of 2017-2018 due to a range of accusations, including about Russian-sanctioned use of chemical weapons in Salisbury, is a warning that should be heeded – especially if demands for trilateral arms control result in further alienation. Recalling the disastrous impact of the suspension of practical cooperation within the NATO-Russia Council on relations, under no circumstances should the Process’ members threaten to curtail the dialogue as a means of punishing one another. It should also agree protocols to ride out difficult periods or black swan events – such as COVID-19.

If the Process is to get stronger it will need to continue to draw on the expertise of NNWS and non-governmental experts, as it has in recent years. This means doing more to communicate what it has achieved and is seeking to achieve; seriously considering the calls by Chris Ford and many others to rebrand itself the ‘N5 Process’, to sever the misleading link between permanence on the UN Security Council and nuclear weapons possession; and making a clear joint statement eschewing nuclear warfighting to build trust and confidence. Recalling the ‘escalation management’ story, the NWS should also identify three to five good case studies of doctrinal discussions that cleared up misunderstandings and present these at the RevCon.

An earlier version of this piece stated that the five states had agreed that France would take over the P5 coordinator in May. It has since been clarified that discussions are ongoing.

Disclaimer: The author does not speak for the UK Government, but has remained close to the process through off-the-record conversations with officials over the past four years.

The P5 Process: a French perspective

France’s priorities for the P5 process are moving forward the deliberations on the Fissile Material Cut-Off Treaty (FMCT) and strategic risk reduction. 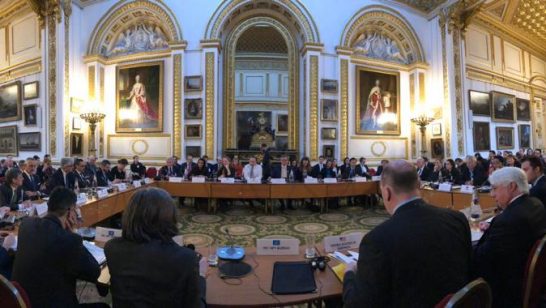 Securing empathy to prevent misunderstanding among the nuclear five

High-level officials from the five nuclear weapon states recognised under the NPT met in London this week for the 2020 “P5 Process” dialogue.