The July 2017 G20 summit reflected the growing distance between the EU and the US, on climate and trade specifically, but in a broader sense too. The EU, it seems, has started to address this issue in the field of defence, as apparent from the Council Conclusion of 23-24 June. These were somewhat unique as they put defence and security front and centre. Barring the Councils surrounding the creation of the European Security and Defence Policy (ESDP) and the Common Foreign and Security Policy (CFSP) over fifteen years ago, it is difficult to recall another time when these hard-core issues were debated and decided at the highest level of the EU.

The Council conclusions amply reflect this reality: five out of 13 pages and 11 out of 24 articles are clearly devoted to security and defence, indeed opening the document. Moreover, keeping in mind articles 20-23 are related to migration and notably the need to enhance security in Libya, and the final article (24) to digital Europe but inter aliacyber security, then it must be understood that most of the conclusions are focused on defence and security. Add to that sanctions on Russia – which were discussed in the margins of the Council and rolled over unanimously five days later – and it is clear the European Union has shifted focus: it is now a union that is collectively and openly interested in defence and security.

This evolution has not occurred by chance: the clues are in the subject matters noted above. Starting with the citizen demonstrations in Maidan Square in Kiev in autumn 2013, the EU has been jolted into a recognition of a new era of threats and risks both to its very existence, and to its Member States. For it must be recalled that while the causus bellum of sanctions on Russia was the annexation of the Crimea from Ukraine in March 2014, the chronology of confrontation started in Maidan, in November 2013, when the population demanded the Ukrainian government agree to deeper cooperation with the EU and sign an Association Agreement. The lure of democracy and free trade embodied in the EU is a direct threat to the survival of the Russian regime far more than any military activity. Thus, in the first and most substantive instance it was the European Union that Russia was rebuffing and contesting, not NATO, and to no small extent that remains the case to this day.

The migration crisis that followed, with more than one million people crossing into Europe, followed in quick succession by terrorist attacks in Paris and then Brussels effectively established the parameters of the EU awakening: defence and security could no longer be an issue of abstract debate or a game of accounting between allies. It was now about “defending our security” as a senior official put it in conversation some weeks ago.

This is important because it reflects that the EU shift is not necessarily related to Brexit, NATO, President Trump or the 2% defence spending pledge, although these may have been coincidental contributing factors. The change is fundamentally about the EU and its interests: its survival as a prosperous trade, political and security union, and the freedoms it brings, notably the freedom of movement and especially the sustainability of the Schengen Agreement. Moreover, given the chronology of unrest, this issue has become a matter of political survival for politicians across the EU.

This reality is well reflected in a plethora of speeches made over the past several months, be it by Angela Merkel, the EU High Representative Federica Mogherini, or Commission President Jean-Claude Juncker. In a keynote speech given on 9 June, President Juncker clearly noted that a “European Security and Defence Union will help protect our Union, which is exactly what EU citizens expect.” It is this correlate that is the biggest impetus in this new departure: if a political leader, either individually or as part of a collective, cannot provide security to his or her citizens, that leader will be out of office faster than anyone can utter the acronyms CFSP, EDA (the European Defence Agency) or indeed the newest acronym in the EU dictionary: PESCO, Permanent Structured Cooperation. And beyond the declarative innovation of an EU defence union, herein lies the real political advancement: the acceptance of differentiation between EU member states, and that some can move ahead on this matter alone, or before others – but that significantly, the entire Union supports this move.

It is this combination of tangible threats, political necessity and a framework for practical advancement that sets this new departure in EU defence apart: this is not another rhetorical exercise, but rather a clear decision to embark on a new path. As such, it is somewhat futile to continue the debate on the advisability of an EU defence and security union – whether on its merits alone, or in the face of NATO and its commitments and capabilities. That train has left the station. However, what is still very much open to debate and influence is the route the train takes.

In article six of the Council conclusions it is clearly stated that the “transatlantic relationship and EU-NATO cooperation remain key to our overall security.” It will be up to the other allies to hold the EU states to this commitment – whether it be in ensuring interoperability, maintaining capabilities or remaining at the table if tensions grow.

Evolution in matters of defence never occur rapidly: alongside bureaucratic hiccups, political wrangling and financial concerns, there is a deep rooted, if oft unspoken, acknowledgement that defence is the title we use for activities that could end up in death and destruction. In the past months, culminating in the 22-23 June Council, the EU has clearly made a commitment to become a bigger defence player: that is a very significant step in a world that is far from certain. It is hoped that together with its allies in NATO, it contributes to re-establishing some certainty. 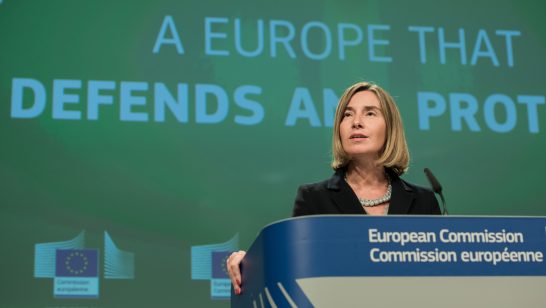