Creating an inclusive Permanent Structured Cooperation (PESCO) project, which 25 EU member states joined last December, will mean small and mid-size member states playing an important role in the success of PESCO initiatives. Regional cooperation mechanisms can be useful in helping map the direction of some training and modernisation projects in order to streamline intergovernmental processes. Central European countries, who stand to benefit from the modernisation of their armed forces, are therefore an interesting case study in understanding the role that regional cooperation frameworks can play in advancing EU defence ambitions.

Defence issues are a perfect representation of the way the Visegrád Four (V4)[1] works, oscillating between the careful art of disagreement and the reinforcement of common positions – when they exist. At the same time, defence – symbolized by the V4 EU Battlegroup (under Polish command) and the rotation of national forces (at the company level) of V4 countries in the Baltic states in 2017 for common training purposes as a part of a multilateral agreement – is the area in which the V4 has been the most visible as a united group (with the exception of the group’s hardline stance on migration).

The group’s defence agenda represents its true strength. In spite of current tensions regarding rule of law issues and an unprecedented low in cooperation during the Hungarian presidency (ending this June 30), the next rotation of the V4 Battlegroup in the second half of 2019 remains confirmed along roughly the same lines as the previous rotation in the first semester of 2016, with the notable addition of Croatia. This highlights that a uniting goal for the V4, and one of its main foreign policy priorities on top of implementing the NATO reassurance and deterrence measures, will be to fight future irregular migration to the region. Croatia is an important actor on this front, and also a member of the Central European Defence Cooperation framework (CEDC), along with Austria, Slovenia and V4 members minus Poland, which has observer status. In 2017, the CEDC conducted a series of exercises where armed forces were called on to guard borders from a sudden migratory influx. The region, which sees itself as the gateway to Europe, has moved forward in thinking about how police and armed forces can be used in a regional framework to meet this challenge. This is especially true for Hungary and, to a lesser extent, Slovakia and the Czech Republic and has had the effect of shifting political priorities in these countries in which the immediate Russian threat is much less obvious than in Poland. The use of the EU BG for these purposes remains an unlikely scenario, but will certainly be a part of future discussions.

On the other hand, the institutionalisation of the V4, especially at the defence level, means that the addition of this new priority has not significantly distracted members from carrying out measures in the NATO framework. Hungary and Slovakia have opened their National Force Integration Units, and while the Czech Republic decided not to do so due to a different threat perception, the country will participate in 2018 and 2019 in NATO’s Enhanced Forward Presence battalions in Latvia and Lithuania (with an option for redeployment in 2020) and has sent officers to staff NATO’s Multinational Corps Northeast in Szczecin. Poland, of course, remains at the forefront of deterrence, and has recently floated the potentially very controversial proposal of hosting (and paying for) the permanent stationing of a U.S. armored division on its territory. This is representative of the leadership role Poland sees for itself on the broad “Eastern flank” of the Alliance. Any discussion about sharing the burden with other countries from the V4 could soon prove divisive, as southern V4 members have seemingly moved to a phase of “rational Atlanticism” as opposed to Poland’s “reflexive” conception of it. While NATO remains the ultimate security guarantor for all four countries, national security establishments have shifted their approach and understood that their security interests can be similarly satisfied within the framework of the EU rather than NATO. As is usual with the V4 however, a disagreement on policy will not impact the ability of the group to reach agreements and work together on issues where a consensus exists.

PESCO and the steady progress on EU defence issues has already proved to be a divisive element, which interestingly may go beyond the realm of the aforementioned disagreements. The very question of deepened integration is perhaps one of the most divisive within the V4, between Poland and Hungary on the one side and Slovakia and the Czech Republic on the other. This is reflected in the group’s differing approaches to PESCO. The Czech Republic and Slovakia were “early adopters” of the PESCO project, while Hungary and especially Poland joined at the very last hour, outlining the red lines that would condition Poland’s participation in all EU projects. The primacy of NATO’s defence planning process, the necessity of ensuring a “competitive, innovative and balanced basis for the development of the European defense industry” and of keeping a “360 degree approach to the perception of threats and challenges” were the three conditions made clear in a joint letter by the Polish Ministers of Foreign Affairs and Defense to HR/VP that accompanied the country’s notification of its willingness to join PESCO. The Czech Republic, which is the only other country to have a substantial defense industry, has also echoed these concerns and insisted that the interests of SMEs be ensured in the event of collaborative development of new platforms or capabilities in the PESCO framework. The promise of access to the European Defence Fund (EDF) is especially important for these industries that rely on a fairly limited export market and limited domestic procurement, and will be a rare factor of unity for the V4 in terms of European defence.

One of the important questions in relation to PESCO was whether the V4 would seize the opportunity to present projects which would further either their shared objective – better control of future migration flows – or enhance regional cooperation, or even regional and bilateral procurement, which has never taken off. So far, this seems not to be the case: the only project all four countries are part of jointly is the Military Mobility one, and no other V4 state has joined the only project led by a V4 country (Indirect Fire Support [EuroArtillery], Slovakia). Of course, the speedy manner in which the first wave of PESCO projects were to be proposed made it hard for both the countries, and the V4 as a platform, to offer collaborative projects.[2] But it does however remain symbolic of the lack of forward planning that exists at the V4 level, and shows that the V4 is above all a political grouping instead of a tool for defence integration. Leaving aside these technical considerations, the intergovernmental process that governs PESCO projects favours bigger countries, which drives the V4 either to relative isolation or to find partners to collaborate on projects, which is today an easier premise for Slovakia and the Czech Republic. In this regard, the V4 countries are some of the strongest proponents of making the United Kingdom as involved as possible in defence issues. This reflects a relatively similar approach to transatlantic security and the perception of London as a necessary counterbalance to the industrial interests of Paris and Berlin.

However, besides the immediate question of PESCO furthering strategic interests, V4 countries would do well to realize that PESCO projects provide a key opportunity for cooperation and the joint training of forces. By extension, this creates greater understanding of national defence priorities and security threats across Europe. This is one instance in which the politicisation of anti-EU politics in Poland and Hungary could be detrimental to the countries’ security and standing. While Warsaw and Budapest understandably have serious concerns about the idea of “European strategic autonomy”, there are ways in which new EU ideas can also foster stronger national and regional security. For example, a larger V4 footprint in European security could lead to greater focus on better border protection. With the discussion of the second wave of PESCO projects underway, it remains to be seen whether the V4 will continue, on the issue of EU defence, to remain a divided actor or whether it will seize the opportunity to act in concert. There is little doubt that, given the European consensus on the importance of protecting borders, such initiatives would be viewed with great interest in Paris, Berlin, and elsewhere.

[1] The Visegrád Four is the political and cultural alliance of the Czech Republic, Hungary, Poland and Slovakia. It was established on 15 February 1991. 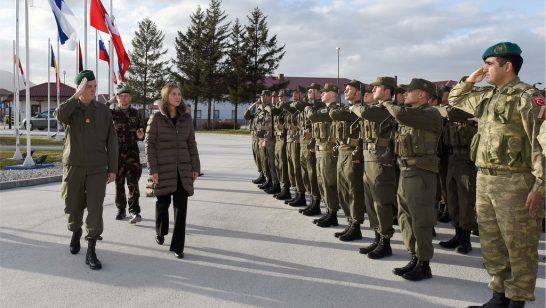 Bosnia and the EU: Time to end Operation Althea

ELN Senior Associate Fellow Nicholas Williams argues that, even if the EU’s military function in Bosnia has evolved from a deterrent to a reassurance role, the military presence could at some stage become an obstacle to progress towards EU membership.