When Russia holds its annual Victory Day parade on Saturday 9th May, western leaders will be notably absent from the festivities, kept away by the Ukraine crisis. One world leader who seems unfazed by Russia’s diplomatic problems is China’s Xi Jinping, who will take his place alongside his Russian counterpart. The visit, which will likely be accompanied by bilateral talks and precede a joint naval exercise in the Mediterranean, marks the latest in a series of high-level meetings between the two leaders. Debate is already rife as to the solidity of Russia and China’s relationship, but one thing is for sure: Moscow and Beijing are closer today than they were this time last year.

A number of articles will be published this weekend on the Russia-China relationship, with commentators trying to fit President Xi’s visit to Moscow into one of two narratives. The first, the ‘marriage of convenience’ narrative, tends to portray the current rapprochement as tactical in nature and focuses on the potential hurdles that can falter the budding Russia-China partnership. The second, the ‘soft alliance’ narrative, posits that despite their differences, Russia and China have likely entered a period of long-lasting good relations, stopping only a step short of forming a formal alliance.

Two respected and thoughtful commentators have articulated the ‘soft alliance’ or ‘quasi alliance’ narrative in recent months. Alexander Gabuev, writing for the European Council on Foreign Relations, argues that “Putin’s Russia has made a dramatic turn towards China…” and “though Russia and China are unlikely to develop a formal alliance, China and Russia may form a kind of ‘soft alliance.’” Dmitri Trenin of the Carnegie Moscow Centre has also argued that “In the coming years, [Russia-China] relations are likely to get appreciably closer, tending toward a quasi-alliance and quasi-integration.” Trenin has also suggested that Russia’s new ‘quasi alliance’ with China signals the end of its integration with ‘Greater Europe’ and its replacement with a ‘Greater Asia’ design.

There are a number of examples of how Russia and China have strengthened their relationship in recent months through major gas deals worth hundreds of billions of dollars, bilateral diplomacy and closer military-to-military cooperation. Economically, Russia’s vast supplies of resources compliment China’s seemingly insatiable appetite. There is also a shared Russo—Chinese belief that the international order is dominated by the West, which is trying to contain Russia through an expanding NATO and China through a strong U.S. presence in its neighbourhood.

Russia and China have indeed developed a strong relationship, and many of their achievements are laudable. But the reality remains that many of the headline grabbing Russia-China stories, like President Xi Jinping’s trip to Moscow, reflect a public relations effort more than development of strong long-term ties. Next week’s joint Russo-Chinese naval exercises in the Mediterranean serve as a perfect example of this. China can demonstrate the growing strength of its navy and ability to project its power beyond its periphery. Russia reminds itself and its western neighbours that it has powerful friends.

Ultimately, the developments in Russo-Chinese relations so far have been focused on the ‘easy’ aspects of their relationship, namely their anti-Western mentalities and resource complementarities. Before we settle on describing the relationship as anything other than a marriage of convenience and start talking about an alliance, there needs to be more evidence of cooperation in the areas of potential divisions. Thus, we should assess the prospects of the relationship through the prism of three key tests.

The first is Central Asia. China’s interest in the region is confirmed by President Xi’s visit to Kazakhstan before heading to Moscow. Beijing’s new Silk Road plan, the flagship of its foreign policy under the Xi/Keqiang administration, looks set to expand China’s influence in Russia’s backyard. Moscow has already demonstrated at its western borders that it is not keen on losing influence in what it deems to be its sphere of influence, and it remains unclear how this hurdle will be navigated. Analysts will wait to see a clearer picture of how Russian territory will fit into China’s desired trade route to Europe and how a potential clash of the Russia-led Eurasian Economic Union and China-promoted projects is avoided. Furthermore, we should watch closely the annual meeting of the Shanghai Cooperation Organisation (SCO) in July, to see whether it expands both its membership and its tasks. Should the July summit produce a clear horizontal and vertical strengthening, and should we see a closer cooperation between Russia’s EEU and China’s Silk Road initiatives, then it will show a greater Russian acceptance of Chinese influence in the region and a desire to cooperate.

The second test is the future of bilateral military cooperation. The agreement to sell the advanced missile defence system, S-400, does mark a softening of Russia’s attitude to China. In the past, fears about China’s growing military strength and its habit of reverse-engineering Russian technology have discouraged Russia from selling high-tech weapons to China. It remains to be seen if this sale marks a reversal of the declining sales of Russian weapons to China. Moreover, while joint military exercises are a symbolic show of strong ties, experts have pointed out how Russia’s Vostok-2010 and Vostok-2014 were aimed at proving Russia’s military strength against a number of hypothetical enemies, including China. If the next Vostok exercise can be seen to have less of a China focus, bilateral arms trade increases in value, and the S-400 system is actually delivered on time, it will be a clear demonstration that the Russia-China relationship is no longer inhibited by Russian anxiety regarding possible military threat from China.

The third and final test will be in the area of economic cooperation. Development of Russo-Chinese economic relations has been much touted in the last year, in an effort to demonstrate that the Russian economy has alternatives to the West. Bilateral trade is expected to hit 100 billion USD in 2015. However, delays in both the Power of Siberia pipeline and proposed Altai route demonstrate that Russia may not be as reliable a source of extractives as China may hope. The test for Russia is whether or not it can deliver on its ambitious promises to China, prove it is as reliable a supplier as China is a customer, and expand its economic relationship beyond its current energy focus.

Ultimately, Russia has made some smart moves in an effort to strengthen its relationship with China and move to what Dmitri Trenin calls ‘Greater Asia’. Joining the Asian Infrastructure Development Bank as a founding member is a good example, although it remains to be seen how much influence Russia will have in the Chinese-led bank. A number of questions still remain as to how Russia will develop its relationship with China beyond a marriage of convenience towards a real strategic alliance. Officials in the West should not ignore the Russo-Chinese rapprochement, but nor should we disregard the fact that the relationship between Moscow and Beijing will face some important tests. 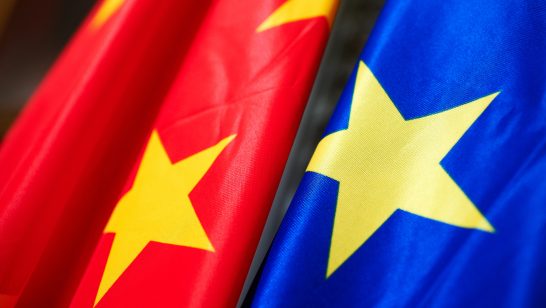 As nuclear weapons make headlines once more, the images and narratives that pervade focus on fear and panic leading to paralysing doom and political stasis. For sustained engagement and real-world change, Elizabeth Talerman and Shazeeda Bhola from The Nucleus Group write that a fundamental shift is required in how the nuclear conversation is framed — invoking hope instead of fear and identifying solutions and shared ambitions.

Lukasz Kulesa observes that the current focus on the humanitarian impact of nuclear weapons makes a comprehensive ban much more likely, but this will not result in disarmament by the existing nuclear weapons state.