Are we on the cusp of a new chapter in the UK’s nuclear story? Rapid technological change and a return to nuclear great-power competition suggest that the contours and central dynamics of our nuclear world are – at best – in flux. These dynamics are challenging long-held beliefs about global nuclear order and governance: beliefs upon which UK nuclear and deterrence thinking have traditionally been based. While we might still only be at the beginning of a “Third Nuclear Age”, this shift in the global nuclear condition is already having an impact on UK national security thinking. At a minimum, it necessitates a frank debate about the role of UK nuclear weapons and the ways, ends and means of UK deterrence, in what seems likely to be a much-changed nuclear environment in the years ahead.

The central challenge of the Third Nuclear Age will be posed by the development of non-nuclear technologies with strategic applications and effects, or Strategic Non-Nuclear Weapons (SNNW), by the nuclear-armed great powers. In this new nuclear epoch, the possession of SNNW by the US, Russia, China, India and others could be as – if not more – important than nuclear weapons in shaping international politics, and the major fears could include instability caused by the threat (or perception) of non-nuclear disarming first strikes and arms racing, the problem of deterring sub-nuclear strategic threats and coercion, the indistinguishability of different capabilities and intentions, and unintended escalation due to entanglement and strategic complexity.

In this new nuclear epoch, the possession of Strategic Non-Nuclear Weapons by the US, Russia, China, India and others could be as – if not more – important than nuclear weapons in shaping international politics Andrew Futter

While there have been periods of concern for UK policymakers as a result of technological innovation and change in the past, this time it is different. This is because (i) a large proportion of these systems are non-nuclear, and some are non-kinetic; (ii) it is a mixture of weapons capabilities, support infrastructure, strategic missions and context that are changing rather than one individual system; (iii) the effect is global and it is intrinsically bound with renewed great power competition and a challenge to the “western-led” order; (iv) and different technologies with possible strategic effect are reaching fruition at the same time.

There is no one list of what constitutes SNNW, and it is helpful to distinguish between technologies, capabilities, and particular missions, but the following will all be cental in the Third Nuclear Age:

All of this is unfolding within a nuclear information space that has been transformed by real-time intelligence, connectivity and democratisation of those who can access, intervene and interfere in the safe and secure governance of nuclear order.

Taken together, this appears to represent a genuinely new set of pressures for managing nuclear risks and necessitates a reassessment of what it means to deter and maintain stability, and about the role of nuclear weapons more broadly.

Implications for the UK

So what might this mean for the future of UK nuclear weapons and deterrence thinking?

Perhaps of most concern is the potential for direct threats to the UK nuclear deterrent that might mean it cannot function in the way that is intended and desired, or at best, confidence in the invulnerability and security of the SSBN-Trident system is undermined. While hopefully at this stage hypothetical, this could emerge in several different ways.

The most obvious is a breakthrough in Russian or another states Anti-Submarine Warfare (ASW) capabilities that makes finding and tracking UK submarines less difficult. For sure, the ocean is vast and offers an enormous place for submarines to hide, and access to deep water from Faslane is good. But UK submarines are limited to some extent in where they deploy missile ranges and undersea mapping by the depth they can submerge to, and by the need to leave and return to port the same way. It is not inconceivable that a future great power adversary could cast doubt on the sanctity of this system – perhaps by using a combination of traditional ASW (attack submarines, airborne surveillance), computer network operations, and underwater autonomous sensors and platforms. Though, of course, these are unlikely to be unopposed.

A second possibility is that CNOs are used to undermine the SSBN-Trident system in another way: stealing design secrets (for example, regarding acoustic-dampening or stealth characteristics of the new Dreadnought class submarine), accessing and compromising the submarines’ various operating systems when they are updated in port (or when coding is written), or somehow targeting the sailors and operators themselves. Less likely but not impossible is that hackers gain access to computer systems onboard the submarine (possibly when it is being updated) that causes key systems not to work as planned. None of these challenges necessarily involve “hacking” the missile or warhead, although these too rely on software and coding that could be vulnerable.

A third aspect, and one that was pointed out in both the 2021 Integrated Review, Defence Command Paper and subsequent ministerial comments, is advances in BMD. BMD has become far more normalised and deployment has spread, including by possible UK adversaries. While BMD refers to many different systems with different capabilities and testing records, a future breakthrough in an adversaries BMD technology (perhaps in combination with the other anti-SSBN or counterforce capabilities) cannot be ruled out for a force that relies on a limited number of missiles and warheads, and in theory a particular range of targets.

The SNNW challenge also raises questions for the UK of what needs to be deterred and how.  The historical record shows that this has traditionally been linked with the “Moscow Criterion” (that is, being able to credibly threaten to destroy a major city) and causing “unacceptable damage” to an adversary, and perhaps even more obliquely with mitigating “future uncertainty”. But there are reasons to suggest that this requires at least a reassessment.

The SSBN-Trident system is inherently designed for the exigencies of the Cold War (and is in no small part the result of the technological relationship with the United States) and for being able to destroy a counter-value target as part of a policy of deterrence by punishment. This is not to say that the Trident missile and Holbrooke warhead could not be used in a counterforce or even a tactical role. However, it would be difficult for the current system to play both a tactical and strategic role in a future conflict against a nuclear competitor because a tactical use would presumably undermine its strategic value (by giving away the submarine’s position), and it is difficult to see when an independent UK nuclear strike would make much sense.

Given that future challenges to the UK (and NATO) could be from a non-great power, or at least not Russia, it is also conceivable that different capabilities might be required for different types of both nuclear and non-nuclear strategic deterrence missions. Three that come to mind are: the ability to conduct rapid non-nuclear long-range strikes against missiles being readied for firing, deploying a limited defensive capability to intercept a small and relatively unsophisticated launch from a non-great power adversary, or building capabilities for SNNW and strategic non-nuclear deterrence in general.

Looking ahead, it may well be that deterring a strategic nuclear-attack on the UK with nuclear retaliation “makes sense” in specific cases, but it is harder to say that this really covers the gamut of “future strategic uncertainty” as it relates to nuclear and non-nuclear existential threats to the UK and its nuclear weapon systems. Indeed, both the 2021 Integrated Review and Defence Command Paper mention the challenges posed by “hypersonic missiles and new doctrines”, but do little to explain how these fit with current nuclear policy.

It is impossible to know exactly how this Third Nuclear Age may play out. It might be conceivable that restraint by all nuclear-armed states in SNNW development lessens the impact of the shift in nuclear order and means business as usual for the UK. More likely, and what seems to be happening now, is that the major nuclear-armed states (including possible UK adversaries) will all develop a range of different SNNW as part of a broader return to great power competition. If this continues, it is possible to envisage arms racing in both nuclear and non-nuclear weapons, periods of instability, and the rapid transition to a world where SNNW play an equal if not more important role than nuclear weapons in global politics. Indeed, it may plausibly be a world in which the perceived strategic and political value of nuclear weapons is reduced over time.

The preferred approach for the UK is to work to curb the deployment of non-nuclear strategic weaponry and convince other nuclear-armed states to do likewise, as this would perpetuate the nuclear status quo based on nuclear deterrence. This is the world for which the future Dreadnought-Trident system has been conceived and is best suited. But this nuclear-deterrence-centric future is not a foregone conclusion, and the UK could well find itself in a global nuclear order where its submarines or missiles become more vulnerable and/or retaliatory nuclear deterrence has an even more limited strategic role than it does today.

At a minimum, this means a major long-term commitment to staying one step ahead of adversaries through better submarine stealth, countermeasures and active defences, warhead penetrability and perhaps greater investment in defending SSBNs when on patrol. It also means having an honest debate about the types of strategic threats that UK nuclear weapons cannot, or at least are not best suited to, deter. Given that this is also likely to be an era where the UK will be reacting to, as much as shaping, global nuclear politics, and where outside challenges to the traditional nuclear order in favour of disarmament are mounting, it is probably time for a broader debate about where nuclear weapons fit in the future of UK security policy.

This article is based on research funded by the European Research Council, grant number: 866155. 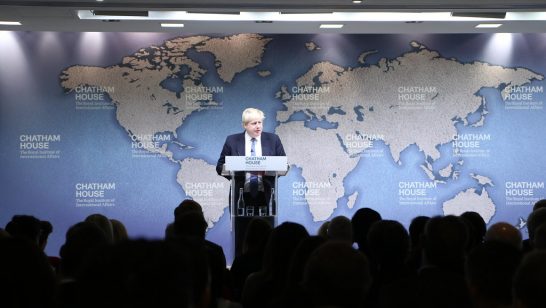 Since late 2016 when ‘Global Britain’ was first mentioned, the UK has been defining its post-Brexit foreign policy framework, aims and ambitions. Nikita Gryazin argues that ‘the Churchill Factor’ plays an important role in Boris Johnson’s ‘Global Britain’ narrative.