The issue of European security will be at the heart of Chancellor Merkel’s imminent visit to Washington. The position of the Trump administration with regard to this issue has not yet been structured. It has mainly been the object of sporadic hints made by the President in his statements and tweets before and after his election. So far no European leader, with the exception of British Prime Minister Theresa May, has met personally with President Trump: thus no additional indications can be gleaned from the bilateral channel. During their first contacts in Brussels and Munich both Vice President Mike Pence and Defense Secretary Jim Mattis tried to reassure their European counterparts about the enduring US commitment to NATO but also stressed the need for greater burden sharing to ensure NATO capabilities.

Seen from Europe, the gist of the President’s discourse appears based on the general “America First” slogan used during his campaign. Trump also shows an apparent predilection for bilateral rather than multilateral engagements and a preferred reliance on the military instrument rather than on diplomacy. Many of his appointees in the field of national security and defence are, or have been, men in uniform. His recent announcement of “the largest defense-spending increase in history” does not include parallel efforts for the State Department budget. To allies who wonder “what kind of friend America will be” he suggested “to look no further than the heroes who wear our uniform”. Just like George W. Bush during the first months of his mandate, Donald Trump seems primarily preoccupied in deconstructing what was constructed by his predecessor and in identifying internal and external antagonists to justify the announced enhanced military spending (“we have to start winning wars again)”.

In his February 23rd interview with Reuters, President Trump gave a first sketchy profile of his views with regard to nuclear weapons. The US, according to the interview must be “top of the pack….we’re never going to fall behind any country even if it’s a friendly country”. By adopting a ‘top of the pack” approach and by questionably affirming that US had “fallen behind on nuclear weapon capacity” he establishes the premises for a nuclear arms race. Despite the fact that it provides for equal ceilings for intercontinental missiles and warheads for Russia and the US, the New START Treaty is seen by the President as “a one-sided deal …just another bad deal”.

On the other hand, in his interview the President also said that “It would be wonderful, a dream would be that no country would have nukes”. The prospect of further strategic negotiations is not abandoned altogether (“We’re going to start making good deals”). These statements might be encouraging from an arms control angle, if they are substantiated by a declared plan to reduce nuclear weapons. In his interview the President also expressed great concern (“to me it’s a big deal”) about the Russian deployment of a ground-based cruise missile capability in violation of the 1987 INF treaty.

A constant source of US complaint is the fact that Europeans are not spending enough for their defence. In the President’s words, Europeans “owe a lot of money” to ease the US burden in NATO. But we have seen no indications so far as to what President thinks about European nuclear burdensharing, including the costs of maintaining dual capable aircraft and nuclear warheads in Europe. Similarly, we have seen no official US reaction to President Hollande’s recent claim that, after Brexit, France will be “the only European permanent member of the UN Security Council disposing of a deterrence force capable of leading Europe towards greater international responsibilities”. The idea of establishing a European nuclear capability goes back to the 50’s and never materialised. A consensus on such a major evolution is not achievable by the EU as whole. In the EU’s present political configuration, only a smaller circle of EU countries could take the lead to reach more advanced forms of defence possibly through the instrument of “permanent structured cooperation” (PESCO) established by the Lisbon Treaty.

Among Europe’s priorities is the survival of the nuclear deal with Iran which is considered another “bad deal” by President Trump. EU High Representative for Foreign Affairs and Security Policy Mogherini has clearly stated that this is not a bilateral deal between the US and Iran but a plurilateral arrangement involving other countries. It is also one of the few nuclear success stories of the past decade.

As the US strategic position is still uncertain and key positions in the Administration still remain vacant, Europe has the opportunity to identify common ground and to influence US strategic thinking. Federica Mogherini is trying to do precisely that by frequently crossing the Atlantic and by initiating a dialogue with the new team in Washington. Whether one likes it or not, these are Europe’s interlocutors.

The EU approach must be firm on the fundamentals:

In the meantime, Europe and the US must focus mainly on areas of convergence: fighting terrorism; strengthening the Nuclear Non-Proliferation Treaty (an issue not yet addressed by the US President); and mitigating the risks of military incidents at sea, in the air and on the ground between NATO and Russia. These are areas where common ground already exists and joint efforts between of Europe and America are necessary and possible.

Ambassador Carlo Trezza argues that EU leaders must continue to support and implement the Iran deal and strongly encourage the incoming US Administration to do the same. 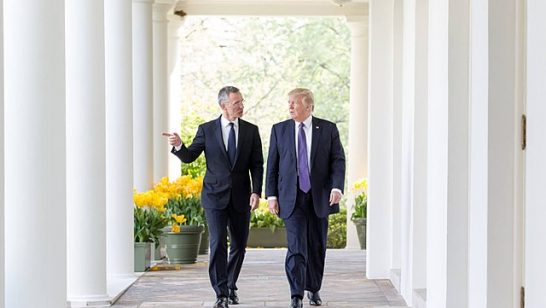