Ever since the outbreak of the current crisis in the Persian Gulf in June 2019, starting with a series of attacks on commercial shipping and culminating in the detention of the British oil tanker Stena Impero by Iran in July, Europe has been under pressure to take a stance.

Although most EU member states (with the exception of the UK) opposed joining the US-led naval coalition in the Gulf, there has been general agreement in Brussels on the need to ensure some sort of military presence in the regional waters.

The idea to deploy a European Maritime Situation Awareness mission in the Strait of Hormuz (EMASOH) was put forward by France in November 2019, after initial discussions between the UK, France and Germany. It finally took shape in January 2020 with the political support of eight other member states: Belgium, Denmark, Germany, Greece, Italy, the Netherlands and Portugal.

What is EMASOH, and what does it mean in practice?

The military component of the initiative, Operation AGENOR, is currently composed of the French frigate Forbin and the Dutch frigate RNLN De Ruyter. At a tactical level, over a dozen Belgian, Danish and Dutch officers oversee the operation from the French naval base in Abu Dhabi, which serves as the mission’s headquarters.

The aim of the mission is to ensure a safe navigational environment through the strategic waterway by providing maritime situational awareness, coordination and information sharing among all stakeholders operating in the area – be it military or civilian. A similar role has been performed with excellence by the EUNAVFOR Operation ATALANTA in the Gulf of Aden, launched during the outbreak of the piracy crisis in 2008.

Furthermore, the mission should serve as a deconfliction mechanism. Amidst the new wave of tensions between the US and Iran, started by the assassination of General Soleimani by a US drone strike in January 2020, Secretary of State Mike Pompeo famously criticised Europe’s reluctance to support the US action as not “helpful”.

Divergence on the treatment of Iran has driven a wedge between Brussels and Washington. The US withdrawal from the Joint Comprehensive Plan of Action (JCPOA), known as the Iran nuclear deal, has been widely condemned by the EU, who played an important role in its negotiations.

At the same time, Europe has traditionally relied on the US security umbrella in the Middle East. It now needs to work hard to redefine its position in the region, where it’s perceived as a marginal security actor.

Clinging onto the preservation of the JCPOA and promoting regional political solutions towards de-escalation has been the basis of the EU’s policy, bringing little tangible results so far. The naval deployment adds a much-needed practical contribution to regional security. It also signals that Europe is not just a conciliatory power, but an independent actor ready to step up in defence of its strategic interests.

What is at stake?

Economic interests are the first to come to mind. Freedom of navigation is of vital importance to the world’s largest trading block. The Strait of Hormuz carries one-fifth of global oil shipments. Although Europe’s dependency on oil exports from the Gulf countries is relatively moderate, a major crisis in the region would affect oil prices worldwide.

With US – Iran tensions not likely to soothe overnight, Tehran may continue using asymmetric tactics including sea mines and seizing commercial vessels, posing a direct threat to the safety of navigation. As a result, insurance costs for shipping companies with vessels plying through the Gulf have already increased ten-fold since the beginning of the crisis in June 2019.

Furthermore, practical challenges stemming from the high concentration of international naval presence are not to be underestimated. Nearly 80% of oil shipments through the Strait of Hormuz are destined to China, India, Japan, and the ROK, which have started to deploy assets to the region to protect their commercial vessels. In such a busy and narrow waterway, this increases chances of miscalculations and incidents, making effective coordination even more acute – and offers a niche for the EU to fill.

Finally, the strategic dimension of maritime security in the Gulf extends well beyond the Persian Gulf. China’s expanding naval presence in the Indian Ocean, with the establishment of its first overseas military base in Djibouti, has been a growing concern to security analysts who point out the emergence of new strategic dynamics in the region.

Beijing’s growing defence cooperation with Pakistan, Russia and Iran are to be watched carefully, especially in light of its lasting tensions with the US. The first trilateral naval exercise between China, Russia and Iran in the Gulf of Oman at the end of December 2019 was reported as the “new triangle of power”, showing the willingness to counterpoise the potential strategic void left by the US in the Middle East.

The nine-day joint naval exercise “Sea Guardians 2020” with Pakistan, held at the beginning of January, is another sign of a maturing Sino-Pakistani defence relationship and China’s growing military footprint in the western Indian Ocean.

Is Europe ready to face these strategic challenges?

Clearly, among the lively debates in Brussels on the future of the European defence budget and in light of the many pressing issues, including the current coronavirus pandemic and the migration crisis on its borders, talking of the EU’s capacity to manage crisis beyond its borders may raise a few eyebrows.

But the initiative in the Strait of Hormuz is one concrete example of how states can address ad hoc security problems and overcome internal institutional obstacles with creativity, pragmatism and sufficient political will.

The trick is, as Timothy Garton Ash recently put it, to just do it! It simply requires a group of states, who share the same strategic concerns, to develop a coordinated policy and work together towards a common goal in whatever capacity they can. It also requires someone to take the lead.

When it comes to the Indo-Pacific, France is the most natural candidate, especially in the post-Brexit context. But that is not necessarily a bad thing. After all, the defence of free and safe navigation – whether in the Strait of Hormuz, the South China Sea or other potential maritime security hotspots – serves the interests of all European countries.

If the EU wants to become a credible maritime security provider, as stated in its Global Strategy, it needs to accompany its normative discourse with more concrete actions. In this respect, EMASOH is not only timely but could serve as an inspiration for similar initiatives in the future.

Tarja Cronberg argues that by better understanding what made the Iran nuclear negotiations successful the West can shape a more effective approach to the Syrian crisis.

US President Biden and his team have stated their interest in restoring alliances with Europe. Sahil Shah argues that there is no better place to start than announcing bold action on Iran and the JCPOA at this year’s Munich Security Conference, a topic that did more damage to transatlantic trust and security relations under Trump than any other issue. 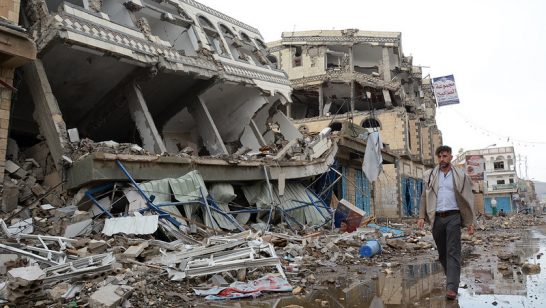 #YemenCantWait: Russia and the US have a shared interest in a ceasefire in Yemen

As the US’s new envoy for Yemen heads to the region this week, he is coming from consultations with representatives of all five permanent members of the UN Security Council. The US and Russia’s ability to coordinate and find common ground at the UN will be critical for the prospects for peace in Yemen. There may just be an opportunity for progress.