Against the background of growing international tensions, persisting deadlocks in disarmament talks, and growing frustration amongst non-nuclear weapon states, the international community is looking to the five recognized nuclear weapon states under the Nuclear Non-Proliferation Treaty (NPT) – China, France, Russia, the United Kingdom, and the United States (collectively known as the P5) – for action. Under current circumstances, a feasible option for the P5 represents the launch of a regular, sustained, and open-ended dialogue on strategic risk reduction. Such a dialogue could take place within a permanent working group entirely committed to the issue, which will improve global strategic stability and create a constructive working environment for the next NPT Review Conference.

The year 2020 marks a landmark for the history, present and future of the global nuclear order which now stands at a crossroads. Three anniversaries have reminded the P5 this year of the unique historic and humanitarian responsibilities their status comes with: 75 years have passed since the first and last nuclear warheads detonated in the cities of Hiroshima and Nagasaki. Half a century ago, in an unparalleled effort to contain the risk of nuclear weapons proliferating in an unstable international system, the NPT was ratified. And only 25 years separate us from when the NPT was extended indefinitely in anticipation of tangible disarmament by the P5.

25 years later and the world has taken several steps backwards. With the erosion of the INF Treaty and the potential expiration of New START, the nuclear age has entered a new stage that is characterized by frozen dialogues on arms control and disarmament. The malaise causing these major setbacks lies in the strained geopolitical environment and the mistrust about intentions that prevails amongst P5 members, hindering the P5 to collectively live up to their commitments under the NPT, especially with regard to the second pillar of disarmament.

Frustrated with the P5’s failure to pursue disarmament, more and more non-nuclear weapon states have embraced the Treaty on the Prohibition of Nuclear Weapons (TPNW). At the time of writing, the TPNW misses only six ratifications to enter into force. Somewhat ironically, the TPNW represents the single issue that unifies all the five NPT nuclear-weapon states in joint opposition. This is emblematic for the profound estrangement between nuclear and non-nuclear states and the extent to which the decoupling of narratives between epistemic nuclear policy communities has progressed.

Enter the Covid-19 pandemic, which has unleashed a state of instability across the world and revealed the economic and political cost stemming from the current lack of international cooperation and leadership. Covid-19 quickly overshadowed cooperation on nuclear issues and led to a renewed escalation between some P5 members, with the side-effect that the prospect of P5 cooperation is at an all-time low. However, the Covid-19 crisis has also forced the postponement of the 10th NPT Review Conference. Although regrettable, this has granted policymakers more time to think about ways out of the deadlock.

Strategic risk reduction as a way out of the deadlock

In the near future, it is evident that nuclear-weapon states are not ready for disarmament and mutual concessions due to mistrust about intentions, rather they have hardened their nuclear deterrence postures and modernized their nuclear arsenals. Yet, at this point, inaction is not an option. An effort is needed by the P5 to reassure non-nuclear-weapon states about their NPT commitments. At the same time, the P5 must engage in a conversation about the dangerous misperceptions the P5 hold about each other’s nuclear intentions. To foster global strategic stability, the P5 must complement the ongoing exchanges on nuclear doctrines and address new confidence-building measures.

Engaging the P5 in a regular, sustained, and open-ended dialogue within a permanent working group on strategic risk reduction could achieve just that. Strategic risk reduction entails measures which, as long as nuclear weapons exist, prevent and reduce the risk of their intended or unintended use. These measures can range from declaratory nuclear policies, operation policies, and communication and cooperation policies, to agreements that limit the roles, types, and numbers of certain nuclear weapons.

Offering a broad menu of options for discussion allows the P5 to leave aside issues of great military concern and explore less-politicized areas of common interest, as well as to anticipate emerging risks emanating from new technologies such as artificial intelligence. Where more sensitive issues are concerned, clarifying them – as a P5 dialogue on strategic risk reduction would enable – could reduce key risks of miscommunication by providing a greater degree of precision on other states’ thinking.

Other international initiatives, such as Creating an Environment for Nuclear Disarmament and the Stockholm initiative, have already begun work on the topic. Strategic risk reduction also features highly on the Agenda for Disarmament and in a number of intergovernmental processes. While the P5 themselves have signalled their interest in the issue, they have so far stopped short of engaging in a sustained dialogue on it that could result in tangible strategic risk reduction measures.

The next logical step is to take up and streamline these existing efforts in a regular and sustained dialogue that is entirely committed to strategic risk reduction and conducted within a forum where the participating states have the competencies to transform words into deeds.

Paving the way for a successful NPT Revcon

The P5 process is the right platform to launch such a dialogue. At this critical time, it would help the P5 to stabilize a volatile international security environment, build new strategic trust between one another and gain reputational benefits through an issue in which many non-nuclear-weapon states have expressed an interest. But it also poses an opportunity for the P5 to reinvigorate the P5 process and discover new avenues for cooperation to enhance strategic stability.

While establishing such a dialogue will not fully assuage TPNW supporters’ concerns about the P5’s commitment to Article VI of the NPT, P5 strategic risk reduction will send an important signal that the P5 take these concerns seriously. Getting non-nuclear weapon states on board and stimulating new discussions will be crucial if the P5 do not intend to repeat the failure of the 2015 Revcon to agree on a consensus final document in the upcoming Revcon (a consensus final document is the measure of Revcon success).

With the 10th anniversary Revcon approaching, the time is ripe for the P5 to meet their responsibilities and lead the world towards a safer future. Launching a P5 dialogue on nuclear risk reduction marks the first step in the right direction. 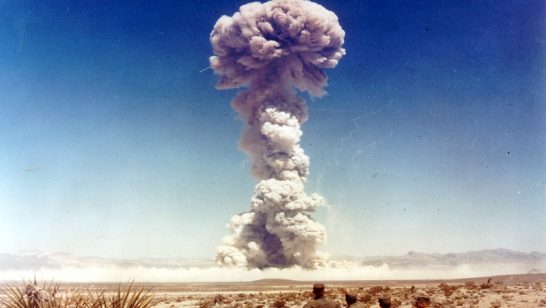