From 11-13 September 2016, the European Leadership Network in partnership with the Nuclear Threat Initiative (NTI) and Friedrich-Ebert-Stiftung (FES) hosted a delegation of European parliamentarians for an international dialogue on global nuclear security in Washington, D.C. 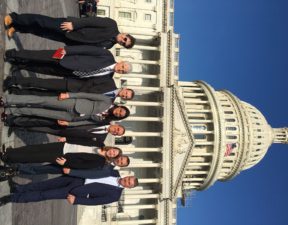 Led by ELN Chair Des Browne, the trip included meetings with experts from the Washington think-tank community as well as senior figures from the U.S. State Department, the Department of Energy, and members of Congress. The parliamentarians also visited the Norwegian and British embassies in Washington, D.C.

– Dr Karl-Heinz Brunner MP (Germany) Chair of the Subcommittee on Disarmament, Arms Control and Non-Proliferation, member of the German NATO Parliamentary Assembly Delegation and member of the Defence Committee.

– Dr Marek Ženíšek MP (Czech Republic) Member of the Chamber of Deputies, vice-chairman of TOP 09, member of the OSCE Parliamentay Assembly delegation and member of the Defence Committee.

This dialogue on global nuclear security is intended to create better understanding of the U.S. approach to nuclear security and to build sustainable relationships with partners from Europe.

Drawing on insights from former high-level nuclear decision-makers and current officials at a virtual pilot-workshop, this report explores the complexities posed by emerging technologies and their possible impact on nuclear weapon decision-making.