ELN Director Ian Kearns and Research Director Lukasz Kulesa took part in a trilateral seminar organized by the Atlantic Council of the United States in Washington D.C on October 6, 2014. The event focused on assessing common and divergent interests of the U.S., Europe and Russia in the new security environment. The current status and future of European and Euro-Atlantic security institutions were also discussed. The event brought together senior experts from think tank and academia from the United States, European countries and Russia. It served to advance work on a joint report, which will be published by the end of the year and include policy recommendations on the way forward.

The OSCE in Ukraine: “First Responder” or Last Resort?

Paul Fritch argues the case that despite its subtracters the OSCE mission to Ukraine has been an efficient and capable operator, restrained more by its mandate than by lack of ability. 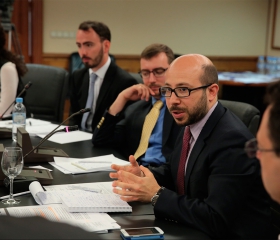