The Task Force on Cooperation in Greater Europe believes the current crisis is putting the security of everyone in Europe at risk and is potentially pitting nuclear armed adversaries against each other in a highly volatile region. In its second position paper on Crisis Management in Europe in the context of events in Ukraine, the Task Force calls for both sides to:

The Task Force also calls for both sides to:

The Signatories of the Task Force paper include:

This position paper is available for download in the following additional languages:

The European Leadership Network hosts the Task Force on Cooperation in Greater Europe in London, December 2014.

ELN Director Ian Kearns and Research Director Lukasz Kulesa have visited the United States to take part in a trilateral meeting organised by the Atlantic Council in Washington. 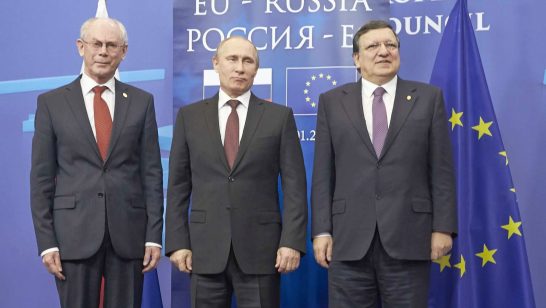 It is Time to Pursue a Cooperative Greater Europe

The first position paper from the Leadership Task Force identifies a strategic vacuum in European international relations and calls for the Pursuit of a Cooperative Greater Europe.