Axel Hellman is a Policy Fellow at the European Leadership Network (ELN).

At the ELN, his work primarily centres on economic statecraft, U.S. foreign policy, and Russia-West relations.

Prior to joining the ELN, Axel worked in management consulting in Stockholm, Sweden, and as an external adviser to Oxford Analytica and a London-based political risk start-up. He has previously held positions at the Center for a New American Security (CNAS), the Hudson Institute, and at Freedom House, where he supported the organisation’s work with congressional offices and external audiences.

Axel completed a Master’s Degree at St Antony’s College, Oxford, and holds a B.A. in International Relations from King’s College London’s Department of War Studies. He has also studied at Georgetown University in Washington, DC, and MGIMO-University in Moscow. He is currently a member of Stockholm Free World Forum’s Foreign Policy Academy and a former Emerging Scholar Fellow at the Milton Wolf seminar at the Diplomatic Academy of Vienna.

Axel speaks English, German, and Swedish, and his analysis and commentary on international affairs have appeared in venues such as The National Interest, RealClearDefense, and Svenska Dagbladet. 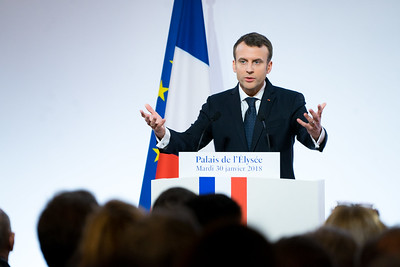 President Macron’s recent remarks that NATO is “brain dead” can only be understood as an extension of already formulated policies, but it comes with risks, Axel Hellman and Andreas Persbo find on a recent trip to Paris.