Daniel Shapiro attended Brown University as an undergraduate, receiving bachelor’s degrees in Political Science and Slavic Studies in 2018. He then began his studies at Harvard University, where he received a master’s degree in Regional Studies: Russia, Eastern Europe and Central Asia in 2020. His research has largely focused on U.S.-Russian relations and the Caucasus: he wrote his undergraduate thesis on Ramzan Kadyrov’s post-war reconstruction of Chechnya and his graduate thesis on the views of young Russian Americanists on the future of U.S.-Russian relations. Daniel has also worked for Harvard Kennedy School’s Russia Matters Project and the European Leadership Network, and has been living in Yerevan, Armenia on a Fulbright research grant since Spring 2021. Daniel is also a Fellow at the Stanford U.S.-Russia Forum. 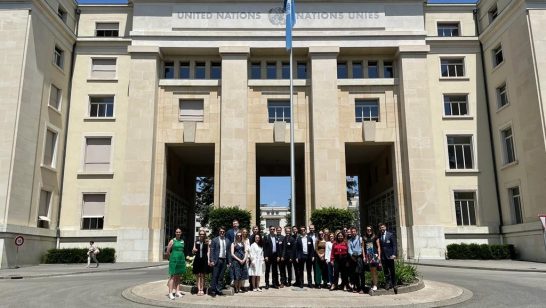 The YGLN annual gathering: An invaluable venue for dialogue between young leaders from Russia and the West

In this critical period, the ELN’s Younger Generation Leaders Network on Euro-Atlantic Security (YGLN) held its annual gathering from 13-16 June in Switzerland, sponsored by the Swiss Federal Department of Foreign Affairs. Members met with the French and Norwegian Permanent Representatives to the United Nations Office in Geneva, as well as representatives from the Swedish, German, and Dutch Missions and the United Nations Institute for Disarmament Research (UNIDIR).