Maxim Starchak has a PhD in Political Science, and an MA in International Relations from the Irkutsk State University. He passed postgraduate courses in MGIMO (University) of the MFA of Russia, CTBTO Preparatory Commission in Vienna, Belfer Center for Science and International Affairs at Harvard University. In 2013-2015 ­ he was a Research Fellow and Editor of the “Security Index” journal at PIR Center; also in 2013-2014 ­a Research Fellow at the Military Economy Department of the Gaidar Institute for Economic Policy. During 2011-2014, he was an expert at the Eurasia Heritage Foundation. In 2011- 2013, he was a Research Fellow at Institute for US and Canadian Studies and Executive Director of the Center for Strategic Estimates and Forecasts, which founded an International Expert Council on cooperation in the Arctic. In 2011 ­he was Editor-in-Chief of the journal “Big game: politics, business, security in Central Asia”. In 2009-2013, Expert on the “Security Index in Central Asia” project, at the Institute of Political Solutions (Kazakhstan). In 2010-2012, Head of Analytical Directorate at the Foundation for advanced studies “Bastion’. In 2008-2010, a Council Member of the Siberian Centre for security and nuclear nonproliferation. In 2007-2010, Coordinator of the Russian Youth Association for Euro-Atlantic Cooperation. In 2006-2011, Vice President, Head of the Research Group on International Security and Conflicts at Russian Political Science Association. In 2006, he was also the co-founder of Youth Department at Russian Political Science Association.

In 2013-2014, he was author and editor of PIR Center White Paper “Towards nuclear disarmament: NTP article VI and Implementation of the 2010 Review Conference Decisions”. In 2014-2015, Executive Editor of the
Conference Proceedings of III & IV Moscow Conference on International Security of the Ministry of Defence of Russian Federation. In 2014-2015, Working Group Member from Russia for preparation of the BRICS Think Tanks Council report (section “international peace and security).

Since 2010 he has been a permanent member of the Expert Council of the annual all-Russian essay competition on NATO-Russian relations of the NATO Information Office in Moscow and Information Centre for International Security. He has received academic and public awards and grants from: MGIMO-University, Moscow State University, Institute of Oriental Studies, JSC “Rosatom”, Eurasian Development Bank, Russian Political Science Association, Federation for Peace and Conciliation, National Committee on BRICS Research, NATO Information Office and EU Delegation in Moscow. 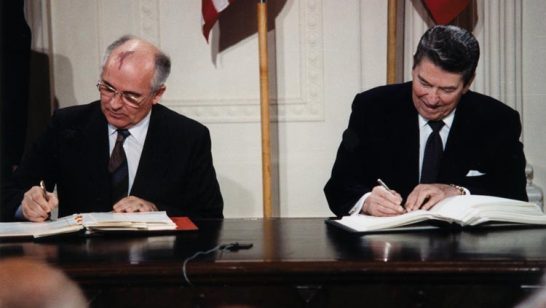 Arms control in Russia–West relations: learning from the experience of the first Cold War

Maxim Starchak writes that the Russian annexation of Crimea and military support to south eastern Ukraine has led, deliberately or accidentally, to a new Cold War in Europe. Starchak argues that there are lessons from the arms control of the first Cold War.