The ongoing confrontation between Russia and the west has been characterised by competing narratives concerning the origins and development of events. These differing interpretations make coming to any kind of consensus on the future of the European security order extremely difficult.

Prominent European and Russian experts were brought together by the European Leadership Network and the Russian International Affairs Council (RIAC) to examine these narratives, their origins in international law, and to determine how they may be transcended. This workshop forms part of a larger research project, supported by the Carnegie Corporation, with the next meeting due to take place in Moscow.

In its analysis of the experts’ deliberations, the ELN found fundamentally different interpretations, on both sides, to critical questions relating to the evolution of the European security order; the expansion of NATO; past military interventions; the right to self-determination; and the right to succession.

The nature of the problem:

The dominant western media narrative on the crisis in Russia-West relations is that, through its annexation of Crimea and intervention in eastern Ukraine, Russia has behaved aggressively, has broken international law, and the core policy challenge for the West is therefore how to deter further such Russian aggression while trying to re-establish the status quo.

In this narrative, arguments used by the Russian elite are dismissed as instrumental, developed for propaganda purposes only, and are unlikely to be genuinely believed even by Russian leaders themselves.

However the ELN’s new report, while certainly not producing agreement over Ukraine or Crimea, tells a more complex story of the differences over European Security running much deeper than one might think.

The report finds that:

ELN Research Fellow Thomas Frear examines the intelligence failures of the 1983 Able Archer military exercises, arguing that those same failures, centred on a lack of empathy, are being repeated in the current NATO-Russia confrontation. 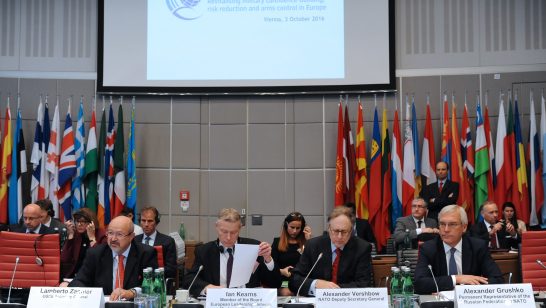 ELN Research Director Lukasz Kulesa and board member Ian Kearns participated in the most recent OSCE Security Day in Vienna, presenting the ELN’s work on risk reduction in Europe.