As NATO prepares for its 11-12 July summit in Brussels – with NATO-Russia relations high on the agenda – and as a Presidential US-Russia summit is due to take place in Finland later this month, there is an urgent need to inject new thinking into the dialogue over how Russia and NATO could safely co-exist and how Europe’s security could be improved as a result.

In pursuit of this vision of co-existence, and in full recognition of the differences between the parties and of the dire state that this relationship is still in, a group of Members and Supporters of the Task Force on Cooperation in Greater Europe  have agreed on a common Position Paper to guide the relationship going forward.  The distinguished signatories include former foreign and defence ministers, military leaders, diplomats and experts from the United Kingdom, Turkey, Russia, France, Ukraine, Germany, Italy and the Netherlands.

The Position Paper, developed during a recent Task Force meeting in London with co-conveners Lord Browne (former Defence Secretary of the United Kingdom), Igor Ivanov (former Foreign Minister of the Russian Federation) and Özdem Sanberk (former Turkish Ambassador to the United Kingdom) proposes a new interim and temporary approach to the management of the NATO-Russia relationship. While treating each other as adversaries, NATO and Russia should at the same time take precautions to ensure they do not to stumble into a conflict.

No new document is needed, but all sides should develop a shared understanding about the basics of the current relationship. While continuing to operate within the framework of the 1997 NATO-Russia Founding Act and the 2002 Rome Declaration, such a NATO-Russia understanding could include the following elements:

Reaching such a basic understanding on the interim rules of the game would not constitute a “reset” of NATO-Russia relations, but it would open the way for more transparency, predictability and risk reduction as well as for avoiding misunderstanding, miscalculation and unintended escalation.

The following Task Force Members and Supporters are signatories to this Position Paper: 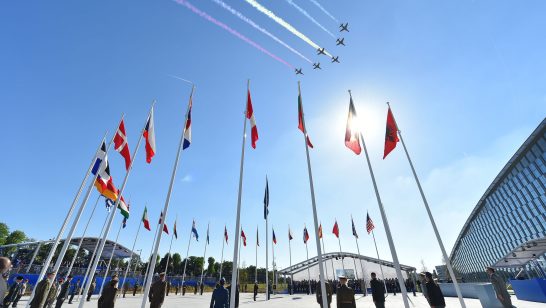 NATO’s Brussels Summit: Getting From Good to Great

In a report released ahead of the NATO summit in Brussels, Sir Adam Thomson, ELN Director and former UK Ambassador to NATO assesses three core challenges to NATO solidarity – (1) Russia, (2) NATO’s engagement southwards, and (3) transatlantic burdensharing – and offers specific recommendations in each area for the summit declaration, communique and EU-NATO Joint Declaration.