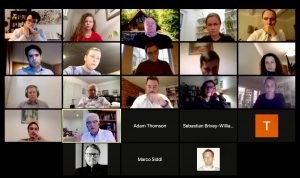 very first virtual annual gathering of the YGLN took place in November. Almost 50 members and partners joined us over the course of three days. As usually, the YGLN working groups selected a very broad and exciting set of themes, including: “Climate policy: What role and place in the economic recovery?”; “The US elections and their impact on global and regional security architectures”; “Democracy in the age of pandemic”; “The rule of law in the age of COVID-19”. In another roundtable on “Disinformation campaigns in the social media sphere: What can we do to counter them?” we were joined by Omri Preiss and Maia Mazurkiewicz from the Alliance4Europe’s Social Media Intelligence Unit (SMIU) and Nad’a Kovalčíková, Programme Manager and Fellow at the Alliance for Securing Democracy, Brussels Office of the German Marshall Funds of the United States.

Over 40 members of the YGLN, the ELN’s senior network and NATO officials participated in an event co-hosted by YGLN and NATO’s Public Diplomacy Division on July 10. In this roundtable we explored the field of “The future of transatlantic security cooperation: nuclear weapons and new technologies” with a number of outstanding experts from within the Network, NATO and partnering institutions.

In a panel on “Transatlantic security cooperation in light of emerging technologies”, Eline Chivot, Senior Policy Analyst, Center for Data Innovation and Simona Soare, Senior Associate Analyst, European Union Institute for Security Studies shed light on the impact of emerging technologies on the future of defence and security in the transatlantic region from a broader perspective, including from a tech governance and “technology sovereignty” angle.They addressed what implications will the global technology race in which the US and Europe are engaging have on transatlantic security relations; what are ways forward on future collaboration in the area of new tech? And how can transatlantic societies in security sector become more resilient, develop a better understanding of new tech, and benefit from applying them? This panel was moderated by Roger Hilton, YGLN member and Research Fellow, Defence and Security, at GLOBSEC.

In a second panel addressing “Cybersecurity and its impact on transatlantic security relations and nuclear risks”, Jessica Cox, Director of Nuclear Policy at NATO and Kenneth Geers, Atlantic Council Senior Fellow and NATO Cyber Center Ambassador spoke about the specific threat of ever sophisticated cyber attacks on critical infrastructure such as military installations and nuclear weapons-related facilities, and discussed the question as to whether these threats can be better dealt with on a national level or through multilateral efforts. This session was chaired by Andrew Futter, YGLN member and Associate Professor of International Politics, University of Leicester.

“40 years since the birth of Solidarity: legacy and lessons for struggling democracy” 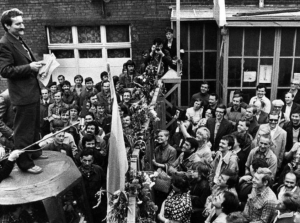 Ebert Foundation and the Younger Generations Leaders Network hosted a  special event dedicated to 40 years since the creation of Solidarity in Poland. Ideas that were born in Gdansk in 1980 played a major role in transforming the communist system and the global order. How is the decade inspired by Solidarity viewed from today? In the age of new divisions and backsliding democracy in Europe is it time to rethink the past in order to find solutions for the future? Can Europe return to solidary solutions of common problems?

The YGLN occasionally convenes smaller ad hoc meetings online in an informal and confident setting which we name the East/West Coffee Shop. Following the protests in Belarus, the YGLN decided to organise a YGLN-only briefing on the situation in Minsk, followed by a discussion.

For further information on what was happening in Minsk this summer, visit our East/West Coffee Shop podcast on Belarus.

YGLN Event on Politics of Memory

While the world commemorates 75 years since the end of the World War II, European history resembles a broken mirror. Nations on the continent are contesting for their visions of the past and the role they played in it. As a consequence, the historical memory falls victim to numerous manipulations in the name of geopolitical interests. How can we start détente on historical memory? Is a unifying image of the past possible and reachable? What should experts and civil societies do to promote an open discussions on our common past?

The YGLN Working Groups on Security, Economics, Rule of Law and Civil Society hosted a number of roundtable discussions on a number of different topics which the Working Groups selected themselves. This was a new format which we established to respond to the pandemic and the demand for more frequent YGLN meetings. Members highly valued the opportunity to connect with their counterparts in smaller and more flexible settings while they were prevented from travelling.