Despite the rhetoric of the Warsaw Summit, NATO is yet to fully develop its approach to the partner countries in the Black Sea region and devise a viable strategy for its long-term relations with Georgia and Ukraine. Unless a more concerted effort is made to reshape the Alliance’s long-term vision for the two partnerships and project power in the region, the Black sea area risks becoming a permanent vulnerability and a potential source of instability.

Russia’s invasion in Georgia in 2008 and the annexation of Crimea in 2014 demonstrated that reiterations of continuous engagement short of full membership, which was pledged at the 2008 Bucharest Summit, have been the only militarily plausible NATO approaches vis-à-vis these partners as Russia challenged them with near impunity. Both crises highlighted that the Alliance was not and is not in a position to grant a collective defence guarantee to Georgia or Ukraine.

The Alliance is quickly arriving at the point when the political and military leadership must define with greater clarity the long-term relationship with both states. The current indecisiveness on membership and obscure rhetoric on readiness and timeframes are creating uncertainty not only with regards to the partners’ positions, but also with regards to Russia’s understanding of the power balance in the region. More problematically, the challenge of devising and presenting a comprehensive strategy is symptomatic of a chronic mismatch between the end goals of the Alliance and its partners.

On the one hand, for Georgia and Ukraine the ultimate goals of the accession process are membership and the collective defence guarantee. Cooperation and work on interoperability of their armed forces are conceived and treated as tools to achieve this goal.

On the other hand and despite the rhetoric, interoperability and cooperation of the respective armed forces seem to be increasingly seen as the end goal for the Alliance. That is because the rationale behind partnership and membership has significantly shifted from recruiting like-minded states to seeking partners in collective actions to ensure stability in the neighbourhood. More importantly yet, this has also been reinforced by the lack of internal consensus on the enlargement and its merits.

On Ukraine, the Alliance is yet to define its vision and end goal. The message was missing from the Warsaw communiqué and the Joint statement of the NATO-Ukraine Commission. As long as Western and Ukrainian politicians diverge on whether Ukraine’s membership is a viable option or not, this creates the opportunity for populists, nationalists or radicals to exploit the narrative to their gain. A recent poll quoted by the Kyiv Post suggests that the Ukrainian public is divided over membership of the Alliance, with support for membership actually decreasing.

The issue of long-term goals is even more pressing with regards to the NATO-Georgia relationship. Eight years after the Bucharest decision, Georgia has not yet been invited to start the accession process, nor did it receive any indication of the process’s timeframe. Neither was a Membership Action Plan (MAP) agreed. Among the concrete measures adopted in Warsaw, the ‘[enhancement of] crisis management capabilities, training and exercises, the improvements in strategic communications […] and the development of Georgia’s air defence and air surveillance’ are positive steps in increasing Georgia’s readiness and resilience. Further, additional protocols of bi-lateral co-operation with individual member states were devised including a collaboration programme with the US and the development of NATO-integrated air defence capabilities purchased from France.

However, the more interoperable Georgia becomes, the more difficult it will be to navigate the relationship if membership is not offered. With parliamentary elections scheduled for October 2016, NATO’s failure to fully bring in Georgia would be reflected in the increased support for political forces favourable to accommodating Russian interests. In a worst case scenario, should such trends continue, Georgia could become the most militarily integrated NATO partner actively pursuing closer ties (including security) with Russia.

The scepticism of leaders and electorates alike in major Allies towards accepting Ukraine and Georgia into the Alliance would be difficult to overcome. If it is deemed that enlargement is not politically plausible then the rhetoric and policy must change. Otherwise, statesmen risk facing disillusioned and even deceived neighbours.

Firstly, the Alliance could consider abandoning the 2008 pledge of membership for Ukraine or Georgia. This would allow NATO to focus on enhancing capabilities in existing members and clearly signal that the collective defence pledge would remain an unqualified guarantee. Such a position, however, would be a significant breach of political principles and commitments and would reaffirm fears that power politics is indeed the principal consideration of the Euro-Atlantic community.

Secondly, NATO can choose to fulfil the 2008 pledge and grant membership to Ukraine and Georgia. This will not necessarily translate into more security and stability for the Alliance. Granted that the timeframe of accession would be different for the two partners, their membership would almost certainly render even limited practical co-operation with Russia impossible. Moreover, Russia could resort to testing the Alliance’s readiness and resolve by initiating further hostilities with these countries, or provoking internal divisions.

Thirdly, a continuation of the current policy in effect translates into a suspension of the enlargement process to the east until such time when relations with Russia might allow for Ukraine and Georgia to join without negative repercussions for NATO. Such an approach may seem most logical or appealing, but it also brings acute dangers. Publics in partner states are starting to feel disillusioned with the accession process and slowly withdrawing their support for membership. Should the impasse continue, these partner countries may face a reality of being led by forces and people deeply frustrated by NATO politics, yet with defence capacities closely linked to structures of the Alliance.

There is however another option whereby the current “membership-light” programme towards the two Black Sea states could be treated as an opportunity. In drawing examples from Finland and Sweden, Georgia and Ukraine could choose to adjust their own policy by not pursuing membership. They would be encouraged and assisted in significantly strengthening their armed forces, a policy driven by the recognition that in the event of war, as NATO members or not, both states will be on the front line, and therefore would always be dependent to a great extent on their own defence capabilities. A non-alignment compromise in this respect could mitigate political rifts among the members of the Alliance and allow for the consolidation of military capabilities within and among them. It could also ease tensions in the neighbourhood and avoid further escalation with Russia.

More importantly yet, such a course of action could be revisited should a change of the strategic environment occur and Georgia and Ukraine still wish to join the Alliance. In the meantime, the challenge of consolidating their strengthened military capability outside of a NATO framework and managing their live border disputes would be overcome by a strict adherence to the principles of self and collective defence the Alliance stands for. Any risks of utilising this improved strength to try and restore their territorial integrity by force would be counterbalanced by the fact that a military approach, unlike a diplomatic one, will not bring stability and peace, but perpetuate the conflict dynamic. Even though a cooperative relationship with Russia in the short and even medium term is not a realistic option, the geography and the people-to-people contacts Ukraine and Georgia share with Russia would preclude a full political and security separation.

Making this initiative a success, however, requires strong political leadership, a common understanding of the mutual benefits as well as of the risks of miscalculation, and above all a firm commitment to long-term stability and prosperity.

[1] The communiqué only referred to Ukraine’s sovereign right to ‘decide its own future and foreign policy course free from outside interference’,http://www.nato.int/cps/en/natohq/official_texts_133169.htm; and the joint statement spoke of ‘firm commitment to further develop the Distinctive Partnership between NATO and Ukraine’ and the issue of membership was not raised at all: http://www.nato.int/cps/en/natohq/official_texts_133173.htm?selectedLocale=en 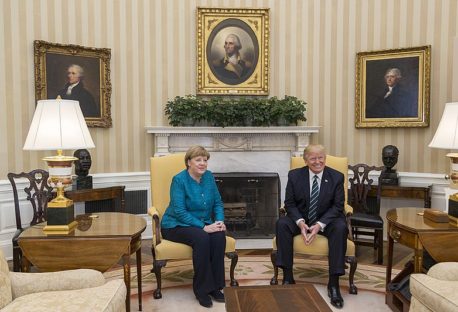 Parameters of the Deterrence and Defence Posture Review