Under Donald Trump, NATO was lucky just to stay alive. Indeed, in 2019, French President Emmanuel Macron warned that the alliance was becoming “brain-dead.”

With NATO leaders holding their first in-person meeting with US President Joe Biden this week, America’s allies are breathing a collective sigh of relief. But NATO must still show that its brain, not just its brawn, is adequate to the problems it faces. To that end, arms control would be an intelligent pace to start.

NATO has a proud record on the issue. It advanced its first nuclear-disarmament proposal in 1957, at the United Nations Disarmament Conference in London. Even in the worst period of  the Cold War, it sought to negotiate mutual and balanced force reductions with the Warsaw Pact. In 1987, it supported US President Ronald Reagan in negotiating the US-Soviet ban on intermediate-range nuclear missiles, which in turn enabled member states to reduce the number of nuclear weapons committed to NATO’s defense. These arsenals are now down by more than 85% since the end of the Cold War.

Recently NATO has appeared to be missing in action on arms control. Adam Thomson

But more recently NATO has appeared to be missing in action on arms control. Its secretary-general, Jens Stoltenberg, can only go as far as NATO’s 30 allies let him.  He insists that “arms control is in NATO’s DNA.” But the alliance has been treating the issue as though it were an afterthought rather than a guiding principle. Stoltenberg’s speech at a NATO conference on arms control in October 2019 points to what has gone wrong.

First, Stoltenberg urged NATO allies to preserve and implement the Nuclear Non-Proliferation Treaty – the cornerstone of international nuclear restraint. In this area, NATO members have not been backing their words with action. On the contrary, the United Kingdom, for example, has just lifted the ceiling on its nuclear weapons arsenal, which will make it much harder for NATO’s other nuclear powers (and those protected by them) to argue that they are upholding the spirit of the NPT.

Second, Stoltenberg called on NATO members to adapt nuclear-arms-control regimes to new realities. But the only guidance he offered was reactive: the alliance should respond “in a defensive, measured, and coordinated way to the new Russian missile threat.” With no new ideas, NATO has responded to repeated Russian arms-control proposals either with silence or by rejecting them out of hand. This position hardly bolsters the alliance’s image either at home or internationally. Why not pursue the moral high ground by making arms-control overtures to the Kremlin, or at least explaining what’s wrong with the Russian proposals?

To be sure, Stoltenberg’s third point was that NATO needs to modernize the framework governing Russian, NATO, and other European non-nuclear military activities (the so-called Vienna Document). And in 2020, the alliance introduced sweeping proposals, only to be stonewalled by Russian representatives. But almost nobody knows this happened, because NATO does not advocate loudly enough for arms control to command any credibility on the issue.

Finally, Stoltenberg pushed for new rules and standards for emerging technologies. Well, it has been nearly two years since his speech. Where are NATO’s proposals?

NATO leaders say they are keeping the door open for meaningful dialogue with Russia, yet the alliance has not offered any serious ideas of its own. Instead, it prefers simply to wait for Russia, thereby handing the initiative to the adversary.

I count Stoltenberg as a friend, and I know that he would go further if NATO members would let him. Trying to build a consensus on arms control among 30 allies with different views is an unenviable task. But now that NATO has a chance to breathe again, it has no excuse for not “walking the talk.”

Moreover, nuclear-arms control is back in fashion: the US and Russia have agreed to extend the New START Treaty for another five years, and the Biden administration has expressed a desire to pursue more arms-control measures. In the past, arms-control negotiations have been one of the most reliable areas for finding common ground with Russia.

To revive that tradition, European NATO allies must share some of the intellectual burden with the Biden administration. By definition, arms control is win-win for all who participate in it. When done well, it delivers more stability, better deterrence, less risk, and lower costs.

With this in mind, NATO needs to put arms control at the heart of the new Strategic Concept that it plans to launch next year, so that the ongoing increases in European defense spending do not become fuel in a new arms race. It should create a Division of Arms Control to facilitate fresh thinking about the future of the process and the risks and opportunities associated with new technologies. And it should start an inclusive dialogue between nuclear haves and have-nots around the world.

Rather than forever circling the wagons, NATO needs to develop its own ideas so that it can respond credibly to its adversaries’ proposals and restore its leadership role. Reviving the arms-control agenda is a key to the alliance’s collective defense – and to proving that it has recovered from its near-death experience. 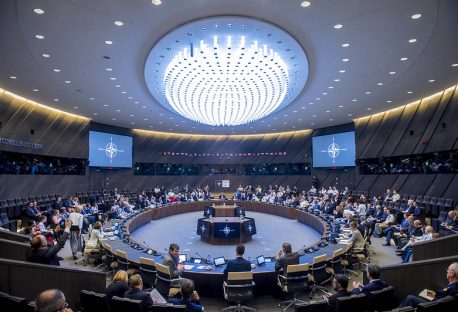