The increased frequency of military air and sea encounters between NATO and NATO partner states and the Russian Federation is a serious cause for concern among policy makers, but relatively little has been done to practically address this issue.

A recent statement by the Task Force on Cooperation in Greater Europe alludes to the possibility of a Memorandum of Understanding between NATO and Russia, based on that instituted between the United States and China in 2014, as a way to determine the behaviour of military units should they come into contact with their opposite numbers. This would introduce some much needed predictability into these encounters and reduce the risk of political fall-out should an accident occur.

This memorandum builds on two bilateral Agreements between the United States and the Soviet Union made during the Cold War, namely the 1972 Agreement on the Prevention of Incidents On and Over the High Seas, and the 1989 Agreement on Prevention of Dangerous Military Incidents. These documents were negotiated after particularly hostile periods of the Cold War confrontation, during which US and Soviet units operating in the Baltic Sea engaged in overtly dangerous actions against one another. Such actions involved warships ramming one another and the use of lasers to temporarily blind personnel in aircraft cockpits and in ship’s bridges. Whilst encounters between the Russian military and those of its neighbours has not yet reached this overtly hostile level the trend is certainly in this direction, with Swedish reports of Russian aircraft firing flairs at Swedish pilot’s cockpits and the Finnish use of depth charges to ward away a suspected Russian submarine in Finnish territorial waters.

In a similar manner to the 2014 US-Chinese Agreement the Cold War agreements contained a series of behavioural procedures to be observed should US or Soviet units encounter one another. The 1989 agreement stipulates not only pre-agreed radio frequencies but also a series of visual signals should electronic communication fail or in the case of no mutual language capability. These signals are to be viewed as a compliment to those outlined in the 1944 Convention on International Civil Aviation. The 1972 agreement stipulates further that approaching aircraft should use “the greatest caution and prudence” and are not permitted to perform simulated attacks on their opposite numbers, a regulation that, due to the nature of certain recently documented encounters, seems to have fallen out of use.

However these procedures were only to be observed in full within what the 1989 Agreement termed ‘Special Caution Areas’ (SCAs). A further stipulation connected to the SCA regulations was that task force commanders entering such an area must fully notify their opposite number of their intentions and the purpose of their mission. Individual commanders of aircraft and ships were expected to be able to provide similar information. Such a provision, above and beyond the OSCE regulations regarding prior notification of large military exercises, would be an important trust-building mechanism were it to be implemented by NATO and Russia.

Due to the Soviet Union’s dissolution in 1991 there is no evidence that any SCAs were actually created, however in present circumstances it seems appropriate that they be reconsidered as a mechanism. The Baltic Sea, beyond littoral states’ territorial waters, is an ideal location to designate as an SCA due to the high concentration of incidents, as is the Black Sea. If the premise is expanded beyond its original bi-lateral nature to a full multilateral format inclusive of all NATO member states, Russia, Sweden and Finland, along-side existing institutions such as the NATO-Russia Council and the OSCE, SCAs have the potential to dramatically reduce the risk of escalation resulting from an increase in military encounters.

An area beyond the remit of these documents is the interaction between military units and civilian aircraft and ships. Several of the more serious incidents that have come to light involved near collision or otherwise short-notice avoidance of Russian military aircraft operating inside civilian air traffic corridors. As has been widely publicised the fact that such military aircraft are often flying with their transponders switched off makes their detection by civilian air traffic control difficult. The reasoning behind this seems to be that this then requires air defence systems to utilise more of their capacity to track the aircraft, allowing more and better intelligence to be gathered. Whilst dangerous it is not actually illegal for military aircraft to fly with their transponders switched off, as they are not bound by International Civil Aviation Organisation (ICAO) rules in international airspace.

Whilst efforts have been made to harmonise NATO operating procedure with that of the European Aviation Safety Agency (EASA) Russia remains outside of this framework. It is improbable that Russia would take similar measures to equalise its military procedures, but an April 2015 report by the EASA does provide two recommendations that could conceivably be implemented by all parties to a Baltic Sea SCA.

The first is a recommendation that the International Civil Aviation Organisation (ICAO) initiate amendments to Article 3 of the 1944 Chicago Convention in a way that requires contracting states to publish their regulations or procedures currently in force regarding the ‘due regard’ concept for the safety of civil aircraft.

The second concerns the shared civil/military use of primary radar. Whilst such radar sharing has become relatively common the EASA emphasises that primary surveillance radar data be provided to civil air traffic control units to the maximum possible extent.

Implementation of these recommendations alongside the broader Special Caution Area framework would institutionalise a culture of caution and information sharing throughout the Baltic Sea, thus lowering the chance of a collision involving a civilian airliner or an escalatory confrontation between military ships and aircraft. The greater predictability inherent in this new arrangement would provide a more stable political backdrop within which discussions on reform of the NATO-Russia Council and the OSCE can take place.

Crisis management mechanisms in the Euro-Atlantic area are in a poor state of repair, and their reassessment is crucial. As highlighted in the Task Force paper, the future of Euro-Atlantic security might very well depend on it.

A shorter version of this article originally appeared in the Moscow Times under the title Preventing War, Step by Step. 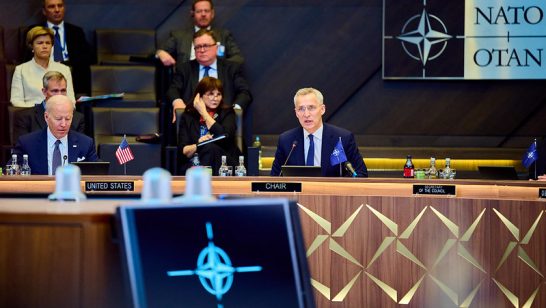 ELN resources for the 2022 NATO summit

NATO leaders are gathering at their annual summit meeting this week to discuss important issues facing the Alliance. The Madrid Summit will address the Alliance’s response to the war in Ukraine, defence spending, climate security, and NATO’s strategic direction for the next decade. Here, we share some materials and analysis from the Network on these core issues.

Anatol Lieven proposes a five point peace plan for the Ukraine to avoid a war which neither Kiev nor Moscow desires.