Unless Vladimir Putin launches a full-scale war against all of Ukraine—in which case all bets are off and prognostications are futile—Ukraine will remain a sovereign state that moves, slowly though inexorably, toward becoming a consolidated democracy, a market economy, a rule of law state, and a member of both the West and the wider community of nations. This optimistic outcome will transpire even if the current Russo-Ukrainian War in eastern Ukraine results in a “frozen conflict” as the result of a Russian occupation of the disputed territory.

The Maidan—or the Revolution of Dignity—that culminated in former President Viktor Yanukovych’s flight from Kyiv in late February, 2014, reversed the radical course toward authoritarianism that he and his Party of Regions had pursued since his election in early 2010. As a result, Ukraine’s elites and civil society now share an unprecedented consensus on the need for radical reform, while the primary opponents of reform—the Party of Regions, the Donbas elites, and the Communist Party—have been irreversibly weakened and no longer pose a challenge to the democratic, pro-Western forces. For the first time in its history as an independent state, Ukraine also enjoys the support of the West in general and of key Western institutions and states in particular. Internally and externally, Ukraine resembles Poland in the early 1990s and, as such, is poised to make a reform breakthrough.

Western support is only partly due to the Maidan’s endorsement of democratic values and human rights. Far more important in turning the West decisively toward Ukraine was Russia’s aggression and its violation of the international order. That aggression went through four, increasingly more violent stages. The first was the occupation and annexation of Ukraine’s Crimean Autonomous Republic. The second was the transformation of an armed pro-Russian separatist movement in the eastern provinces of Donetsk and Luhansk into a Russian-led proxy force supported with armaments, money, and personnel. The third was the Russian proxies’ employment of terror, wanton destruction, and anti-civilian violence (which included the downing in July of Malaysian Airlines Flight MH17) in their struggle against the Ukrainian army’s attempt to reassert control over those parts of the Donbas they controlled. The fourth was the open invasion of eastern Ukraine by Russian regular troops in late August.

The upshot of the Russian aggression in eastern Ukraine was the emergence in most of Ukraine of an unprecedented patriotism and sense of Ukrainian identity as well as the formation of a more effective Ukrainian state apparatus and army. Putin’s imperialist policies succeeded in creating what Ukrainian elites had unsuccessfully pursued since 1991: state and nation building. The Russian invasion of eastern Ukraine also led to the progressive destruction of large parts of the Donbas, the very region Moscow claimed to be “liberating” from the “fascist junta” in Kyiv. In turn, the destruction of the Donbas produced a humanitarian catastrophe that Putin insisted had to be rectified with a further Russian intervention.

The destruction of the Donbas has several additional consequences for Ukraine and Russia. First, whatever its future status, the Donbas will never again have the same clout that once enabled it to obstruct reform and strong-arm Kyiv into tailoring its policies to its demands. Second, whoever eventually comes to control the disputed parts of the Donbas will have acquired an economic mess requiring enormous expenditure of resources. If Russia takes control, it will have to expend its own resources, under conditions of declining economic growth and painful international sanctions. If Ukraine seizes control, its already strained budget will be taxed, while the West is likely to assist with significant economic assistance. Third, if Russia manages to transform parts of the Donbas into a zone of frozen conflict, the political benefit to it and the political harm to Ukraine will be close to nil. Russia will be saddled with the very humanitarian catastrophe its imperialism produced, Western sanctions will increase, and its ongoing transformation into a rogue state will be complete.

In contrast, although Ukraine will have lost territory and suffered a blow to its pride, the emergence of a frozen conflict in the Donbas will only consolidate the nation around the state, enhance Ukrainian patriotism and identity, increase the international community’s sympathy for Ukraine’s victimhood, and in no way prevent Ukraine’s progressive integration into the West and the world. After all, Moldova and Georgia, with their own frozen conflicts in, respectively, Transdnistria and Abkhazia/South Ossetia, signed Association Agreements with the European Union in advance of Ukraine. Azerbaijan has enjoyed rapid economic growth despite its loss of Nagorno-Karabakh to Armenia. Frozen conflicts are inconveniences, but not impediments to modernization and Westernization.

In principle, the solution to the Russo-Ukrainian war is simple. Russia withdraws its troops and its proxies; Ukraine agrees to grant what remains of the destroyed Donbas far-reaching decentralization of authority and language rights. Both sides agree to rebuild the region in cooperation with the international community, to base their economic relations on free-market principles, and to respect each other’s security, sovereignty, and stability. Ukraine could even sweeten the pot by agreeing not to seek NATO membership.

The problem is not with finding a thinkable solution that would benefit both Ukraine and Russia. The problem is with finding a solution that Putin would accept. The wild card in all these scenarios is Russia’s unconstitutionally elected president, who has revived its imperial ambitions and constructed a hyper-dictatorial regime that shares the characteristics of interwar Italy and Germany. Thanks to his mendacity, ruthlessness, and unpredictability, he has engaged Ukraine in a (thus far) limited war and made a massive war in Europe imaginable for the first time since the end of the Cold War. Ukraine and the West must pursue every possible diplomatic solution to the conflict and be ready for every possible reasonable compromise, but they have no choice but to regard Putin and his aggressive regime with the utmost suspicion. The West, if it wants to survive, also has no choice but to view Ukraine as the front line of Europe’s own defense against Russian imperialism. If the West fails to do so, Putin’s destruction of the post-Cold War European order may be inevitable.

Habibe Ozdal outlines the development of Turkish-Russian relations in recent years, arguing that a ‘copartmentalisation’ has helped insulate bilateral ties from obstacles such as the Russo-Georgian War of 2008 and the ongoing Ukraine crisis. 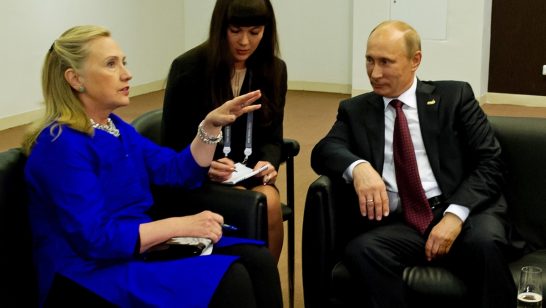