Dr Ian Kearns is the co-Founder of the European Leadership Network and serves on the ELN’s Board of Directors. Dr Kearns served as the ELN’s Director until July 2016.

Previously, Ian was Acting Director and Deputy Director of the Institute for Public Policy Research (IPPR) in the UK and Deputy Chair of the IPPR’s independent All-Party Commission on National Security in the 21st Century, serving under co-chairs, Lord George Robertson and Lord Paddy Ashdown. In 2013 he co-edited Influencing Tomorrow: Future Challenges for British Foreign Policy with Douglas Alexander M.P., the Shadow Foreign Secretary. He also served in 2010 as a Specialist Adviser to the Joint House of Commons/House of Lords Committee on National Security Strategy.

Ian has over twenty years of experience working on foreign and security policy issues and has published on a wide range of issues including Britain’s ‘special relationship’ with the US, nuclear non-proliferation, the enlargement of the European Union, conflict in the former Yugoslavia, and the security situation in Northern Ireland. He is former Director of the Graduate Programme in International Studies at the University of Sheffield, a former Director in the Global Government Industry Practice at Electronic Data Systems (EDS), and a regular media commentator on domestic and international security. Recent media appearances include BBC Newsnight, BBC World Service Newshour, Radio 4’s Today Programme, The Politics Show, Sky News, Channel 4 News and BBC World Television. Ian has also written for print and periodical outlets such as The Independent, The Daily Telegraph, the New Statesman and Prospect magazine. Links to some of his most recent publications can be found below. 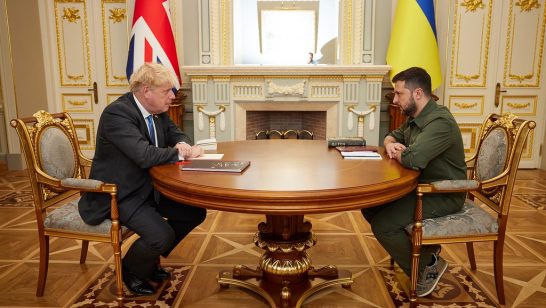 Gaps in Western crisis management are beginning to show

The danger inherent in the basic structure of the Russia-West crisis itself ought to be receiving more attention, argue Malcolm Rifkind and Ian Kearns. The ELN Board members write that the lack of asymmetry of interests with Russia will make it harder to navigate a safe outcome of the war.