Eight years have passed since Georgia was promised in Bucharest that it would one day become a member of NATO. During that time NATO Summits have taken place in Strasbourg-Kehl, Lisbon, Chicago and Newport and we are now approaching the 2016 Summit in Warsaw. Although NATO’s door remains open for some, with Montenegro expecting to become the 29th member of the Alliance this year, for Georgia, NATO’s open door policy looks increasingly selective. This is not because Georgia is failing to meet expectations. As the United States’ Ambassador to NATO, Douglas Lute, recently noted, Russia and the “strategic environment” that it created in its neighbourhood has “put a break on NATO expansion” for the foreseeable future.

If that is true, Georgia has to guarantee its national security through cooperation with NATO, whilst remaining outside the alliance. The current trends for NATO partners converge on a scheme of cooperation termed “associate partnership”, or membership minus. The proposed “28+2” formula for the Black Sea was previously tested with Finland and Sweden and it seems to have enough substance to allow the government in Tbilisi to argue that Georgia should remain engaged with NATO until such time as full membership can be achieved. NATO, it appears, will support Georgia short of risking being drawn into war with Russia. In turn, Georgia will reinforce its national security short of having a conclusive and final Article 5 deterrent at our disposal.
What is clear is that Georgia’s NATO membership no longer hinges on a straightforward conditionality and has very little to do with democratization or interoperability.

Over the last four years, Georgia has emerged as functioning democracy with freedom of speech, rule of law, transparency, and a political level-playing field. Tbilisi has come a long way and can now make this claim with confidence. In terms of some benchmarks, Georgia as a European state often compares favorably with a number of EU member states. This has been attested by the Council of Europe, the European Commission, the World Bank and just about every single independent monitoring agency, from Freedom House to Reporters without Borders. The suggestion that Georgia is somehow failing to meet expectations is both inaccurate and irrelevant. Put otherwise, Georgia’s democratization has not been linear and evolutionary, but to question the progress made is to undermine the model of democracy promotion as such, not Georgia’s achievements.

And as far as NATO’s benchmarks are concerned, Georgia also compares favorably with a number of member states. Georgia surpasses the 2% of GDP military expenditure – which only five NATO member states can claim to do – and is second only to the United States for troop contribution to the Afghanistan stabilization mission. In addition, NATO membership in Georgia enjoys more public and political support than in any other candidate for accession, not to mention a number of member states.

The fact that Georgia is being told not to expect a Membership Action Plan in Warsaw is not “a failure.” It is a decision consistent with NATO’s selective open door policy. Be that as it may, Georgia is eager to be a part of the Euro-Atlantic security framework and to boost its security, until its finds a place inside the Alliance.

Beyond a shadow of a doubt, Georgia’s national security is benefitting from sustained engagement with NATO. Our national defence capacity is deepened and amplified within a Euro-Atlantic framework. The Sachkhere Mountain Training School is an established mountain warfare training facility operational since August 2006, certified as a Partnership for Peace Training and Education Center in 2010. There, the Georgian army can consolidate the operational experience gained through ISAF in Afghanistan. The NATO-Georgia Joint Training and Evaluation Centre in Krtsanisi is in-itself a deterrent of sorts, as troops from various NATO member states will be training in different sites throughout the country. The logic is similar to holding rotating exercises in the Baltic and the Black Seas: building interoperability and, to a certain extent, a deterrence narrative.

With the Euro-Atlantic community, Georgia can achieve more. But, it should also be clear at this point that, as far as relations with Russia are concerned, we are treading a balance between a non-threatening posture and appeasement. The former is legitimate and necessary; the latter is counterproductive and dangerous. The key remains, as NATO Secretary General Jens Stoltenberg recently put it, “to keep channels of communication open” with Russia. But, the messages we send out are also important.

Brussels has reopened the NATO-Russia Council for the first time since the annexation of Crimea. This does not mean that Europe is ready to recognize the notion of Moscow’s special interests in the “near abroad,” unleashing Russia’s worst “animal spirits”. The “near abroad” is not a purely geographic term; it is an imperial concept that replaces the notion of a border with a more fluid concept. States cease to be sovereign and become kin-like entities, with big brothers bullying younger siblings for a port, a road, a pipeline, a military base, a trade regime, or a monument to the Soviet past.

The dangerous fly-by of the USS Cook by a Russian jet off the coast of Kaliningrad and the reported violation of the Polish airspace by helicopter formations are only some in a long string of incidents designed to test NATO’s resolve. The Russian-Armenian air defence treaty, the use of the Caspian fleet to hit targets in Syria, the recent escalation of conflict in Nagorno Karabakh, and continued expansion of the Russian backed South Ossetian regime into Georgian territory, beg the question of where a line shall be drawn. Russia may be seeking to emerge as the piece-keeper instead of peace-keeper. Also, it is clear when one accepts the term “near abroad”, it is only a matter of time before one is confronted with a “middle” and “far abroad”.

The status of “membership minus” needs to make sense for citizens in Georgia, reinforcing their security. The alliance needs to remain committed to a Europe whole and free, including Russia, but with no room for imperialist ambitions. There are times when the Euro-Atlantic community has to be transactional, and others when we can be transformational. But, if we fail to be a community, specific states can be left on their own, with overall negative consequences for European security. 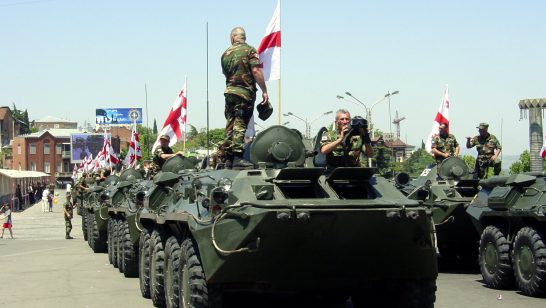 This forum features a range of views from former ministers, current and serving officials and leading thinkers in the run-up to the 2012 NATO Chicago Summit, speculating on what a successful summit outcome could look like.