The coming to power of President Trump in many respects reflects a demand for sovereign policy-making and for reasserting control over global policies. The need for policies that resonate with local constituencies in an increasingly globalized economy is not unique to the United States. There is an increasing demand for trade and labour market regimes to be less “automated” and more responsive to social needs. Governance appears to be no longer about “calibrating” the machine and is more about representing the sovereign. How can this be achieved? There is no straightforward answer. But the implication is that an international system born out of what is known as the “Washington consensus” is undergoing a transition period.

Any transitional period requires a leap into the unknown until we re-establish ground rules and build or rebuild trust, but we are not building from scratch. In this transition it is crucial that we remain a security community. Georgia has a longstanding relationship with the United States. Since our independence – little over 25 years ago — we shaped our country in an American mold: institutionally, politically, normatively, economically, socially, and even academically. Washington was never the only source of development assistance in the region, nor the sole source of diplomatic initiatives, or even the primary foreign investor, but the US presence was strategically significant and offered a vision of progress, laying the foundations we stand on today.

The nation’s elites either studied in the United States or were raised to see democracy, justice, security, institutional checks and balances, entrepreneurship, and citizenship through American lenses. Reelected in October 2016, the second Kvirikashvili administration is pursuing a US-inspired vision of building a country based on the rule of law, low regulation, low taxation, and high economic growth. Our armed forces, judges, and the business community have American partners, trainers, teachers, mentors and role models. We are even used to saving, borrowing and paying in US dollars. We also share an American problem-solving attitude, and we have grown through our bilateral relationship as a polity and as a state. To most Americans, Georgia is a faraway country; but America feels like home to most Georgians.

Georgia is unique among states with the “post-Soviet” label to claim an Eastern European identity. We are no longer a democracy “in transition.” We organize impeccable elections at every level: local, Presidential, and legislative. We have the freest and most pluralistic media landscape in Eastern Europe, comparable only to EU member states; we are among the most welcoming business environments in the world. Georgia’s identity defies the stereotypes of location. Georgia’s political culture defies the stereotypes of location. We have a “can do” attitude and we claim to be part of a greater European order, which goes beyond EU and NATO membership to encompass the sphere of shared norms, values, and political culture.

Georgia is the most advanced reformer in the Eastern Partnership and honed a “special relationship” with NATO, over and beyond the Partnership for Peace framework, as well as bilaterally with the United States. And, as partners, we carry our weight, spending more than 2% of the GDP on defense for several years and contributing to joint missions like no other partner. For instance, our per capita contribution in Afghanistan is second only to the United States.

Nonetheless, our relation to Washington was never “contractual” in nature, as we are not full members of either NATO or the EU. Chiefly, we have viewed ourselves as members of a community founded through the Helsinki Final Act – the modern day Treaty of Westphalia – which is in some respects the declaration of our independence.

Since our independence, like most states in Eastern Europe, we do not regard ourselves as being “in-between” great powers, but as members of a “whole and free” community of nations, in which sovereignty is not a commodity appraised differently according to the distance one has from Moscow. In Europe, among Allies, sovereignty is valued, not appraised. Yes, we are in transition, but we still hold certain things to be self-evident.

True, Georgia has to counterbalance the appetite of Russia to turn every nearby state into a satellite. Still, each Georgian administration reaches out and makes the most of the cultural, religious, and economic ties our countries inevitably share. And we negotiate everything except our sovereignty. We live with Russia, not in Russia. And that is a red line our Allies have always upheld and empathized with, first and foremost Washington.

As a nation, we are determined to be so much more than “near or further” from Russia. Georgia‘s political and institutional culture is not defined by our location, but, our geography opens an array of possibilities for the role we can play. We lie at the crossroads of energy from Central Asian, the Caspian, and the greater Middle East. We are seating at the tip of a rejuvenated Silk Path already working with American companies to open the door to economies with surging incomes and thirsty for goods and services. We are a bridge between the mature and emerging markets. We are the window to a future we can shape, together with Washington and other capitals. 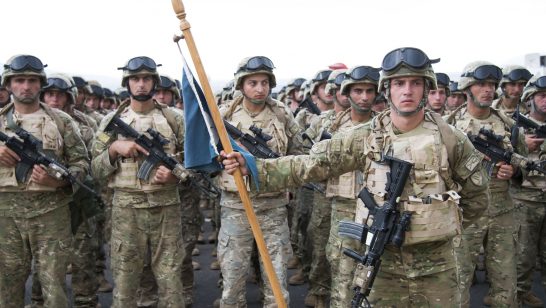 Tedo Japaridze argues that whilst an agreement of a NATO Membership Action Plan is unlikely for Georgia, NATO-Georgian cooperation remains important for national and regional security.