The 20th anniversary of UN resolution 1325 on Women, Peace and Security (WPS) at the end of last month should have been a time to celebrate progress. Instead, a draft resolution, submitted by Russia to mark the anniversary, was subject to intensive and at times acrimonious discussion. Rather than calling for further advances, or even better implementation of 1325, it watered down previously agreed commitments on human rights, prevention of conflict-related sexual violence and women’s equal participation in peace negotiations. In the end, the draft text received only five affirmative votes (it needs nine and no veto), and ten abstentions.  Member states considered no text better than a bad text.

What has happened to the WPS agenda which started out with such great promise and hope?

The UN Charter was the first international document to inscribe the equal rights of men and women as part of fundamental human rights. This came about through the advocacy of three women delegates in the San Francisco Conference in 1945.  They were all from Latin American countries: Brazil, the Dominican Republic and Uruguay.  And together with the other few women delegates who participated they demanded – and got – an explicit reference to women’s rights in the Charter.

Resolution 1325 had a long gestation. It was adopted twenty-five years after the First World Conference on Women in Mexico, which proclaimed a “decade for women”, but one that mainly focused on development and economic assistance for women, not peace and security. One important step was the declaration of 8 March as International Women’s Day, an occasion that women could use for advocacy and campaigning for equal rights – which they most certainly did.

Following the World Conferences on Women, the General Assembly repeatedly called for higher percentage of women in senior UN positions, yet at the end of the 1990s only 7% of positions at the D-1 level and higher were held by women. In 2000, when 1325 was passed, no woman was seated at the Security Council table, and the number of women ambassadors to the UN was in the single digits. Between 1992 and 2019, women made up an average of 13% of negotiators, 6% of mediators and 6% of signatories in major peace processes.

Resolution 1325 had three goals: (i) to increase representation and participation of women at all decision-making levels; (ii) to bring a gender perspective to the planning and implementation of peace operations and peace negotiations; and (iii) to increase attention to the protection and respect of women’s rights.

What has been achieved

This was a watershed. Resolution 1325 placed women and the question of gender firmly on the agenda and made it part of the formal UN discourse on security. It marked a recognition by the Security Council that women were crucial to peace processes and international security, though the initial focus was more on women as victims of under-development.  Since the adoption, the Security Council has regularly monitored the implementation of the resolution in its annual debate in October.

This commitment was also reinforced when the Peacebuilding Commission was established in 2005, followed in 2008 by Security Council resolution 1820 which focused specifically on sexual violence in armed conflict, a topic that has since been addressed regularly in Council discussions on resolution 1325 and peacekeeping mandates. The issue of rape was included in five resolutions on the WPS agenda.

References to women, peace and security have been included in other thematic resolutions as well as in the mandates of peace operations. It has even found its way onto the agenda of the 1533 DRC Sanctions Committee when it listed new entities and individuals, including for sexual violence – a trend that was replicated when the Council responded to the deteriorating situation in the Central African Republic.

It is thus clear that women in peace and security have become a central part of the agenda, both on the political front as well as in humanitarian and social development contexts. It is a topic that cannot be shunned. I should note that resolution 1325 was the first of the so-called “thematic resolutions”; the “thematic issues” on the Security Council’s agenda now number ten and go far beyond the country-specific resolutions and their narrow focus that used to be the staple of Security Council considerations prior to 2000.

Looking back twenty years, one has to underline how much the world has changed and become increasingly militarized. We are at a time of great political turmoil: the world has become more violent, more conflict-ridden, more prone to greater readiness to use force.  The rise of authoritarianism and the extreme rightist ideologies that we are seeing today have led to a backlash against accepting women as equals, and even less willingness to involve them in security issues. In many cases, this has also resulted in less respect shown for protection of civilians, especially women and children, in armed conflicts.

An important step was the establishment by the Security Council of an Informal Experts Group (IEG) on Women, Peace and Security to facilitate a more systematic approach and to enable greater oversight and coordination of implementation efforts. Yet the IEG’s status as an expert group downgrades its visibility: the IEG co-chairs are not included in the list of Security Council subsidiary bodies, and meetings are not reflected on the Council’s program of work. Neither is there an obligation for Member States to attend. While most do, China and Russia are mostly absent.

While the normative framework of 1325 has been firmly established, there is still pushback by Member States. Questions have been raised, particularly by China and Russia, whether the mandate, especially relating to sexual violence in conflict, properly belongs in the Security Council.

But even States which are generally supportive of gender issues are not always in agreement on wording. In April last year, the US threatened to veto a draft resolution on conflict-related violence over language on sexual and reproductive health – even though the same language had already been included in past Security Council decisions. Though the resolution was ultimately adopted, the negotiations proved extremely difficult and China and Russia abstained.

Similarly, contentious negotiations took place in October 2019 ahead of the adoption of resolution 2493 on the WPS. While the resolution was finally adopted by consensus, it has become clear that further expansion of the WPS agenda is not conducive to progress at this time. Even the suggestion to have the IEG submit annual updates on progress towards implementation of the recommendations had to be taken out of the draft.

Still, the last 20 years have accomplished much in the 1325 agenda. The UN Security Council now has a variety of tools in its toolbox to address the issue of gender in peace and security, though these tools have not been applied consistently. One aspect that stands out is the increased involvement of civil society groups, whose representatives have been regularly invited to brief the Security Council in Arria Formula settings (an informal format allowing for nongovernmental briefers).

Progress for women in peacekeeping

A recent Security Council resolution focused on women in peacekeeping, and while not a WPS resolution in the strictest sense, I see it as an important step that furthers a nuanced discussion of women as actors. Previously, calls to increase women’s participation in peacekeeping have relied on gendered stereotypes, on their empathy, on other “soft skills” and their role as protectors of women, girls and children. Such stereotypical language is missing from resolution 2538. Instead, it emphasizes women’s operational effectiveness. This is a subtle yet meaningful change. Equally meaningful is the fact that 97 countries co-sponsored the resolution, including all fifteen Security Council members.

In the current international context, states that support the WPS agenda have to think carefully about how they can most effectively advance it amid the likely pushback.

Drawing on the UN’s enhanced toolbox, they can appoint more gender advisers in peace operations, impose targeted measures for sexual violence, interact more consistently with the Special Representative on Sexual Violence, stress gender during visiting missions, and interact more consistently with civil society groups on this issue. Also important is highlighting the WPS agenda in the Peacebuilding Commission and in the Sustainable Development Goals. And the establishment of UN Women in 2010, the United Nations Entity for Gender Equality and the Empowerment of Women, strongly rooted the WPS development goals in the UN system.

To me, using the individual peace operations mandates seems to be the most promising approach. Rather than anchoring resolutions in the general WPS framework, it may be better to focus on ensuring a central role for women in the context of specific countries or peacekeeping efforts, where the discussion can be on practical, concrete steps, as well as accountability for implementation. This context-specific approach may allow for a deeper discussion during negotiations of the text – and hopefully, lessen gender stereotyping in the final outcome. 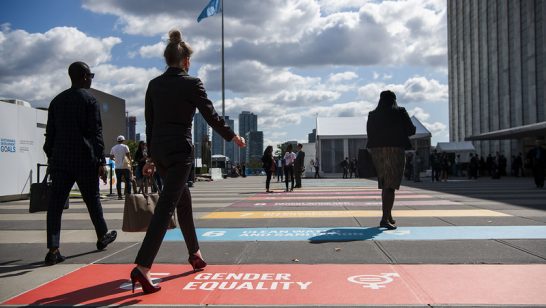 This important initiative brings together senior figures in organisations working on nuclear issues with the goal of breaking down gender barriers in their spheres of influence.