Ambassador Ümit Pamir is a former career diplomat. After graduating from the Faculty of Political Sciences of Ankara University, he joined the Ministry of Foreign Affairs in 1965. Earlier in his career, he has served in several posts at the Turkish Embassies in Budapest, London and Rome as well as at the Turkish Permanent Delegation to NATO. He has served several posts at the Ministry of Foreign Affairs, including as Director of the Middle East and Africa Department and Director of the Policy Planning Department. Subsequently, he served at the Turkish Permanent Mission of the International Civil Aviation Organization (ICAO) (1990-1991), in Algeria (1991-1995) and in Greece (1995-1997) as the Turkish Ambassador. From 1997 to 2000, Mr. Pamir assumed the duties of Chief Advisor of the Prime Minister on foreign policy. Before his retirement, he served as Permanent Representative to the United Nations (2000-2004) and to NATO (2004- 2007). In 2009-2010, he was a part of the Group of Experts, chaired by Madeleine K. Albright, which was convened by the NATO Secretary General to lay the groundwork for the development of a new Strategic Concept for the Alliance. 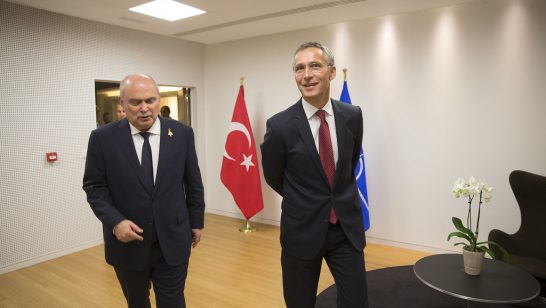