The Kosovo war, while justified, caused anxiety in Moscow. Since NATO could bomb Serbia in violation of international law, there were concerns that Western powers might do the same closer to Russia’s borders. Russia therefore upgraded the role of its nuclear weapons as a temporary measure, waiting for its conventional forces to regain strength. The new Russian military doctrine of 2010 reiterated the message. However, the United States accounts for 45 per cent of world military expenditure and Russia for 3-5 per cent, so if we are going to wait for Russia to gain confidence in its conventional forces we may have to wait for a very long time.

Another approach is more attractive: working with Russia to alleviate its threat perceptions. Unless progress can be made on that score, another US-Russian agreement on deep cuts in nuclear arsenals is unlikely to happen, and without such an agreement further steps towards a nuclear weapon-free world may prove impossible.

Alleviating Russian threat perceptions raises a number of important questions. How can NATO best ensure the security of its East European members without provoking Russia? How can the overall European security and cooperation architecture be improved? What should be the status of the Ukraine, Georgia and other countries in European affairs? It also raises questions about NATO’s own nuclear policies, about the roles assigned to nuclear weapons; ballistic missile defence; and the future of remaining US nuclear weapons in Europe. Last but not least, it raises questions about politics and perceptions in Moscow: how do the Russians understand Western policies and how do we best present them? There is a need for thorough and comprehensive dialogue across a wide range of issues affecting Russian security concerns.

On the role of nuclear weapons, the US Nuclear Posture Review defines the proper direction. The US will work to establish conditions for adoption of no-first-use doctrines. European states must do the same. Such doctrines limit the functions of nuclear weapons to one and one only: deterring others from using theirs. An important disarmament corollary follows: nobody would need them if nobody had them.

Ballistic missile defence is controversial because the technology can be used for offensive as well as defensive purposes. In defending the ABM Treaty of 1992, Richard Nixon put it simply and effectively: if you have a shield, it is easier to use the sword. Such defences tend to create conflicts and lead to arms build-ups. NATO has invited Russia to cooperate on a shield against missiles from the Middle East, and Russian participation is not excluded. However, cooperation between NATO and Russia would have a negative impact on China and other states that are not included, because it leaves the message that security is separable. China is already modernizing its nuclear arsenal in response to the US missile defence program and has the economic muscle to do more. Compromises on the thorny missile defence issues must be struck with a view to the security of all, not a select few.

If the remaining US tactical nuclear weapons in Europe are withdrawn, a new principle may be introduced. Then, no nuclear weapons would be stationed on the territories of others, and as a precautionary measure against fall back to past practices it would be appropriate to turn it into a new international norm. In the larger disarmament context the tactical weapons are first of all a problem on Russia’s shoulders, because it has the great majority of them. It is inconceivable that the United States would be willing to reduce its strategic arsenal much more unless these weapons are taken into account.

To facilitate the integration of Russia into the European system of security and cooperation and create a better atmosphere for management of controversial military issues, it is therefore important to initiate a broad dialogue with Russia on threat perceptions. The dialogue must be conducted with due regard to the ongoing transformation of world affairs, for nuclear disarmament must be pursued as a global common good, not in terms of unilateral advantage or national sacrifice. 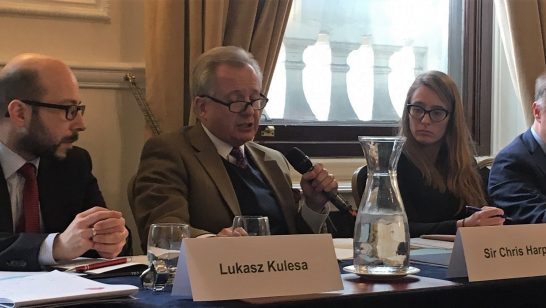