Between 1945 and 1996, the world’s nuclear-armed countries conducted 2,046 nuclear weapons test explosions. While most nuclear tests were underground and a handful underwater and in space, a quarter of them were in open air. These atmospheric tests alone had a total yield that would equate to detonating a Hiroshima-sized nuclear bomb twice every day for 35 years. The radioactive fallout and pollution from all these tests enveloped and seeped into the Earth, signalling the start of the “Anthropocene,” or the current epoch defined by scientists as being characterised by human dominance of biological, chemical and geological processes on our planet.

Nuclear tests sought confirmation that new nuclear bomb designs functioned, fuelling a global arms race. In the process, nuclear testing caused a slew of humanitarian and environmental consequences that will continue to haunt future generations across the world. As the global public began to call on governments to step back from the nuclear brink, the realisation of the effects of nuclear testing pushed states to negotiate a range of agreements leading to the Comprehensive Nuclear-Test-Ban Treaty (CTBT) in 1996. The CTBT was novel because it banned all nuclear tests of any kind and size anywhere.

The CTBT is backed by a global network of various sensors called the International Monitoring System (IMS), which is now largely in place with ninety percent in operation and growing. Given the level of data accrued by the IMS at all times, no state can confidently conduct a nuclear test explosion in violation of the Treaty without detection. In turn, the Treaty is defacto working and contributing a key piece of scaffolding in the global non-proliferation and disarmament architecture. However, this means that the CTBT is a victim of its own success, as it is taken for granted.

When speaking about the future of the CTBT, there is often a focus on unfinished business of key importance: the need for eight remaining Annex 2 States to ratify before the Treaty’s entry-into-force. However, it is crucial to remember that the CTBT has not stagnated and is politically, technically, and monetarily supported by the vast majority of the international community. Signatures and ratifications continue to accrue: the CTBT now has 185 States Signatories, of which 170 have ratified. This progress towards universalisation has not been an easy task and requires a sustained, global campaign to reach the finish line.

There is simply no going back to a world without the CTBT. Sahil Shah

In turn, the European Leadership Network (ELN) has asked some of our distinguished members to answer the following question: “Given we are celebrating the CTBT’s 25th anniversary, how might the international community better foster its entry into force?” While there are no easy answers, let us remember one thing: there is simply no going back to a world without the CTBT. We must work together to finish what we started by shining a light on the shadows of the often powerful but pernicious rationales for why some would like to leave the door open to nuclear testing. If we do not, we will never see a world in which the nuclear threat ceases to loom over us and future generations.

Sahil Shah, Policy Fellow at the ELN and Policy and Outreach Consultant to the Office of the Executive Secretary at the CTBTO; Founding Member and Former Co-Chair of the CTBTO Youth Group

Since 1996, when the Comprehensive Nuclear Test Ban Treaty (CTBT) opened for signature, its supporters have worked tirelessly for its entry into force. Yet, twenty-five years on, although the Treaty enjoys steady support among member states, it continues to linger in a legal limbo. The last eight countries, whose ratification is needed for the entry into force have held steadfast to their position against it.

Worse, just over a year ago, in reaction to reports that senior officials in the US had discussed the possibility of conducting a demonstration nuclear test explosion, members of the CTBT GEM felt compelled to issue a statement warning against that possibility. This would have broken the global moratorium on nuclear weapon test explosions and severely undermined the CTBT regime with potentially dire consequences.

For over a decade, I have advocated for a renewed commitment to full implementation by all parties to the CTBT, and a commitment from those who have ratified to work harder to bring it into force.

We must create new coalitions of like-minded institutions, organisations, individuals, and countries to help defend and promote the Treaty worldwide. Lord Des Browne

So far, my advocacy largely has fallen on deaf ears. Now, we must think afresh about how best to promote the Treaty. To maintain and expand political support and eventually bring the Treaty to the finish line, new arguments in favour of it must be developed. Arguments that are intelligible, accessible, and persuasive to a diverse audience, including decision-makers, journalists, experts, students, researchers, and people interested in arms control and disarmament.

To advance these arguments, we must then create new coalitions of like-minded institutions, organisations, individuals, and countries to help defend and promote the Treaty worldwide.

That is what I am turning my attention to now.

The CTBT followed shortly after the successful adoption of the Chemical Weapons Convention.  No one could have foreseen that the entry into force – easily achieved for the CWC – has still not yet happened.

We know all about the damaging effects of nuclear testing on human beings and the environment – effects that last many, many years, cause untold human suffering and render vast stretches of land uninhabitable. We do not need to be convinced of the importance of the CTBT: why is ratification so difficult for the eight States needed for entry into force? China, India, Pakistan, North Korea, Israel, Iran, Egypt and the United States are the dealbreakers.

India, Pakistan and North Korea have conducted nuclear tests after the CTBT was signed; others have indicated that they accept the provisions of the CTBT even without ratification, yet that is not enough. This would be implementation a la carte, without being bound by a treaty in force.

What better legacy to give succeeding generations than to outlaw nuclear testing once and for all? Angela Kane

There is much discussion about climate change; nuclear tests certainly contribute to the earth’s contamination and degradation. Why not make it a priority to ratify the CTBT and be seen as a nation in good standing in the global community? What better legacy to give succeeding generations than to outlaw nuclear testing once and for all?

I wish we could celebrate the 25th anniversary of the CTBT instead of only marking it. Despite remarkable achievements in terms of membership and the development of an implementation verification mechanism, it is deeply regrettable that the treaty did not enter into force. Some may claim that this is not a pressing issue for the international community: 170 states have already ratified the CTBT, only eight countries are missing from the Annex 2 list, ninety percent of the International Monitoring System is operational, and above all, no nuclear test was conducted since 1998, other than by North Korea. This view is one of sheer complacency and can perpetuate a potentially risky, unsustainable situation.

The international security environment has become highly unpredictable. Competition between major powers, tensions due to regional crises, proxy wars, considerable investments in military research and development, technological innovations, and the development of new delivery means for nuclear weapons significantly increase the nuclear risks. There is no guarantee that a nuclear power will not be tempted to test a low yield nuclear weapon using highly sophisticated technologies.

Civil society should globally mobilise its forces to influence decision-makers in relevant countries to make the entry into force of the CTBT a reality. Ambassador Ahmet Üzümcü

Arms control agreements should serve the security interests of all state parties. Nuclear powers and non-nuclear states alike would greatly benefit from the full and verifiable implementation of the CTBT. This would considerably reduce the risks of a nuclear confrontation. As a science-based Organisation, the CTBTO would also help developing countries to build capabilities for peaceful purposes.

Civil society should globally mobilise its forces to influence decision-makers in relevant countries to make the entry into force of the CTBT a reality. The 25th anniversary of the CTBT provides an excellent opportunity to give new impetus to international efforts to this end.

Creating the conditions for the CTBT to enter into force has eluded the international community for the past 25 years. Since the CTBT opened for signature in 1996, the geopolitical landscape has only deteriorated.

Two trends suggest more troubles ahead for the Treaty. Firstly, a multi-faceted re-armament process is accelerating around the world. In such a context, it is plausible that for some nuclear weapons states, resuming nuclear testing might become an indispensable step to developing a more sophisticated and reliable defence system.

Secondly, the ineffectiveness of traditional multilateral nuclear institutions to reign in nuclear modernisation and arsenal expansions has led many non-nuclear weapons states and a large number of civil society organisations to reject a step-by-step approach to nuclear zero and embrace a more radical and less linear and gradual process. Given this historical moment, although not mutually exclusive, CTBT is less appealing than TPNW and less able to mobilise a global generation of peacemakers and climate-change activists committed to rapid social and political changes.

There is something that can be done today to raise the visibility of the organisation and build a critical mass of support to accelerate CTBT ratifications among the 8-remaining hold out states. Dr Francesca Giovannini

The prospects for CTBT ratification rests on how these trends evolve and the direction they take. However, there is something that can be done today to raise the visibility of the organisation and build a critical mass of support to accelerate CTBT ratifications among the 8-remaining hold out states. Here are three simple ideas:

Dr Francesca Giovannini, Executive Director of the Project on Managing the Atom at the Harvard Kennedy School’s Belfer Center for Science; ELN senior network member, former Strategy and Policy Officer to the Office of the Executive Secretary at the CTBTO

The opinions articulated above represent the views of the author(s) and do not necessarily reflect the position of the European Leadership Network (ELN) or any of its members, or the Comprehensive Nuclear-Test-Ban Treaty Organization (CTBTO). The ELN’s aim is to encourage debates that will help develop Europe’s capacity to address the pressing foreign, defence, and security policy challenges of our time. 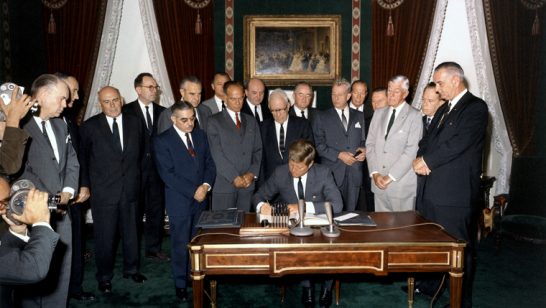 The International Day against Nuclear Tests: A reminder to achieve the entry-into-force of the CTBT

In light of recent reports that the Trump administration is considering the resumption of nuclear testing, the international community should redouble its commitment to the norm against testing. The only way to close the door on nuclear weapon testing for good is to bring the CTBT into force.

Accusations about Russian and Chinese nuclear testing in the US Government’s 2020 Compliance Report forces into the open issues that have been simmering for a long time.