While small in size, the establishment of the “enhanced Forward Presence” (eFP) in the Baltic States and Poland significantly enhances NATO’s defence and deterrence posture. When planning its next steps however, NATO might be well advised to moderate its quest for an ever-larger presence in the east. Improvements to NATO’s defence posture without sending significantly more troops to Russia’s border is, in the short term, possible.

Towards a moderate approach

The Alliance’s shift towards credible conventional deterrence is still far from complete. NATO has to build on its recent achievements of enhancing real capabilities (forces, plans, and command and control arrangements) to provide for the actual defence of its Baltic members. As planners in Brussels and NATO capitals think about the next steps it is tempting to move to a maximalist position. Yet demands for all forces and capabilities to be deployed to the Baltics, and deployed soon, to counter Russia’s much-improved capabilities do not seem politically realistic or strategically wise.

The establishment of the eFP alone stretched the consensus within the Alliance. Countries such as Germany have already gone a long way towards supporting the eFP and taking a strong stance vis-à-vis Russia. During the current German election season, it is unrealistic to assume that further decisions about reinforcements are on the cards. And in the run-up to NATO’s gathering in May, with President Donald Trump pushing the Alliance to take a bigger role in countering terrorism, NATO is increasingly looking south. Consequently, pushing for a maximalist position in the current climate would not bepolitically realistic.

Calling for immediate reinforcements may also not be strategically wise, as NATO has a strong interest in strengthening its posture without exacerbating an already tense security situation to its east. Thus, member states will only agree to a robust strengthening of NATO’s defences in the east if it can be credibly portrayed to domestic audiences, and to the Kremlin, as non-offensive and with minimal risk of provoking unwanted escalation.

So, what could be the guiding principles of a moderate approach?

First, instead of the politically thorny and highly visible issue of troop deployments, NATO could focus on planning and coordination. NATO will not be able to “out-presence” Russia in the Baltics, and no amount of ground forces short of numerous heavy brigades would decisively alter the balance in the region. What is much more important is to integrate the forces already in theatre with ready and tested follow-on forces through credible, visible and effective Allied planning. The eFP is a tripwire. It has to be connected to an emergency service to serve its purpose. Plus, multinational planning and effective command and control arrangements within NATO’s Command Structure are traditional Allied strengths.

Second, NATO could continue providing maximum transparency even beyond its already high standard. If necessary, transparency should be introduced on every level down to operational plans. The goal is not immediate reciprocity – Russia has too much to gain from the current lack of transparency to change its position – but crisis stability and political legitimacy. NATO can afford to be transparent, because it has only little to gain from strategic secrecy. By making maximal transparency a hallmark of its relationship with Russia, NATO might risk losing some operational advantages, but it can gain political legitimacy among its own domestic constituencies, increase Allied cohesion, and contribute to overall conflict stability.

Third, when developing its operational plans and discussing further deployments, NATO could follow the paradigm of a “non-offensive defence”, both in terms of operational planning and force posture. NATO has to go to the greatest lengths to make sure that, at every step, its presence and plans signal a sufficient defensive capability without posing a credible offensive threat to Russian territory. Together with Lieutenant General (ret.) Rainer L. Glatz, I have argued elsewhere that elements of such a paradigm could include keeping heavy forces with a high offensive value to a minimum; maintaining a forward logistical base that would be insufficient for large offensive operations; or designing exercise scenarios of an obviously defensive nature.

Granted, there are good reasons why such a course might fail. Strategic signaling only works when both sender and receiver understand each other’s motives and speak on the same frequency – figuratively and literally. There are excellent analyses on contemporary Russian military culture that highlight how difficult it can be to bridge the gulf between the two sides’ strategic thinking. However, both vis-à-vis its domestic constituencies and facing a Russia that proclaims to see every NATO move as vitally threatening, NATO might be well advised to signal at every step its defensive intent, if need be, at the cost of military effectiveness.

Those are a few elements of a moderate approach to “thicken” NATO’s deterrence posture within today’s political constraints and without an immediate deployment of new forces to the Baltics and Poland. However, moderation does not equal naivety. If Russian actions result in a further deterioration of NATO-Russia relations (this may include an escalation in Eastern Ukraine, intensified sub-conventional campaigns in the Baltic States, or substantial reinforcements in the Western Military District) then increasing NATO’s presence in the region could become a political and military necessity. Then what?

If NATO were to go down this route, why should it not reach back into its own history, namely the 1979 Double Track Decision on nuclear rearmament, and link the decision to reinforce with a conditioned offer to forgo this very reinforcement? The two-step logic of such a “conventional double track decision” could be as follows: NATO would dispense with its current “persistent approach” and reinforce immediately to a level of what the NATO-Russia-Founding Act permits which is up to a permanently stationed multinational brigade under NATO command in each affected eastern member state, accompanied by a “thickened” posture in terms of command and control and planning. At the same time, the Alliance could announce the decision to further reinforce in a set timeframe, this time significantly above and beyond the 1997 limit, should Russia prove unwilling to enhance transparency and reduce tensions in the region.

While such an approach might at first glance sound unrealistic, it could be a viable compromise between those member states pushing for immediate reinforcements and those reluctant to do so. It could reinforce the notion of a defensive Alliance promoting transparency and détente. It could increase the pressure on Russia while offering a tangible incentive for talks on transparency and arms control. And, very simply, it could give European states struggling to meet even the demands of those measures agreed in Wales and Warsaw more time to prepare their forces for such a phased reinforcement.

Of course, there are many questions attached to such a “conventional double track decision”. How credible is a promise to reinforce in two, three or four years from now? Might such a decision not induce Russia to escalate quickly before NATO completes its reinforcements? And would there be any hope of developing a strong and unambiguous negotiating position in an Alliance of, soon, 29? While those questions have merit, strengthening NATO’s defence and deterrence posture is a means not an end. To rightfully be called a strategy it has to be linked with efforts to reduce tensions in the mid-term, as well as prepare the ground for a more stable modus vivendi with Russia. 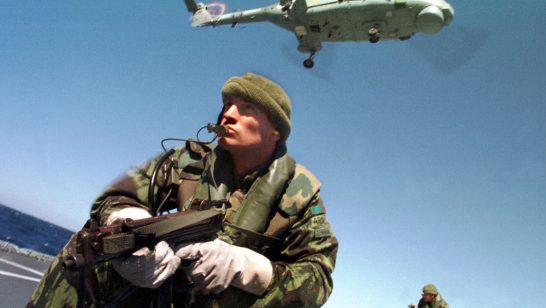 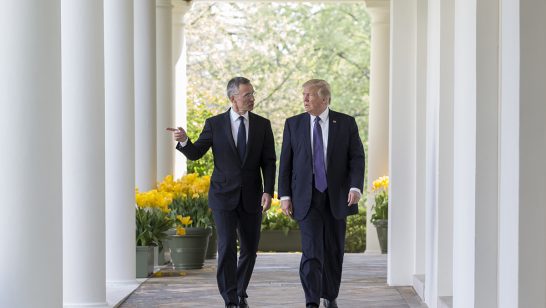 NATO Defence Spending: The Irrationality of 2%

ELN Senior Associate Fellows Nicholas Williams and Simon Lunn argue that elevating the 2% to a test of defence fidelity and solidarity is ultimately counter-productive.