Unlike the 2005 meeting, the 2010 conference was a success: its final document, enshrined in an action plan, covered all three pillars of the NPT (non-proliferation, nuclear disarmament, and peaceful uses of nuclear energy) and addressed some of the most critical nuclear regional situations (the Middle East, and North Korea). Its most important feature, however, was the consensus reached on the need for the establishment of a zone free of WMDs in the Middle East: an ambitious project encompassing nuclear as well as chemical and biological weapons and their delivery systems.

Recognition of the “catastrophic consequences of the use of nuclear weapons” also represented an unprecedented outcome from the Review Conference and the prohibition of the production of fissile material for nuclear weapons through a “Fissile Material Cut – off Treaty” (FMCT), had never before been expressed so unequivocally. The same can be said for comments on the need for entry into force of the Comprehensive Test Ban Treaty (CTBT) and the need for strengthening of security and physical protection arrangements for nuclear material, to ensure that it does not fall into the wrong hands.

If one excludes the question of nuclear security, which was put on the right track by bringing it to the attention of the heads of state and government of the most interested countries in a nuclear security summit series, the implementation of the remaining items contained in the 2010 action plan is disappointing and does not augur well for a successful 2015 session.

The conference on a Zone free of WMD in Middle East, did not take place in 2012 as planned. Its sponsors were not able to announce a new date nor agree on a common statement at the time the postponement was announced. The upheavals caused by the Arab Spring are in part responsible for this delay. But all the NPT countries in the Middle East have the political obligation to participate and to promote this initiative and all remaining NPT states, as well as non-governmental entities, are expected to play a supportive role. The European Union is also recognized in the 2010 final document as an influential player. It is imperative that the conference takes place at least before the 2015 deadline.

If the negotiation of an FMCT remains confined to the chronically paralyzed Conference on Disarmament, the prospects of some progress with regard to fissile material, which is considered the next logical step in the multilateral nuclear disarmament domain, are also bleak. The chances would be greater were the negotiations to be transferred to another venue, as suggested in a recent piece for the ELN by Andrea Berger.

There is no doubt that the entry into force of the Comprehensive Test Ban Treaty, long overdue, would be a major boost for the next Review Conference. However, there is little sign that non NPT countries such as India, Pakistan, Israel and North Korea, will adhere to this treaty any time soon. The focus should therefore be on obtaining ratification by all the NPT states. China, the US, Egypt and Iran, (strange bed fellows…) are the only missing NPT signatory states among those whose ratification is indispensable for the entry into force of the treaty (the so called “Annex 2 states”).

Iran swears that it has no intention and no plans to produce nuclear weapons and yet it still refuses to ratify the Test Ban Treaty which would make a weapons program impossible. If Iran wishes to be credible, it must ratify the CTBT now. The international community does not insist sufficiently on this point. The European Union, and the UN Secretary General, both staunch supporters of the CTBT, should be at the forefront when it comes to making this demand.

In principle, the re-election of president Obama makes the ratification of the Test Ban Treaty easier however, bi-partisanship on multilateral treaties in the US Senate seems to have become unreachable. The positive result of the 2010 Review Conference was mainly attributable to the impulse given by the new approach to arms control announced by president Obama in his 2009 Prague speech. It is uncertain that the US alone will be able to act again as a locomotive in 2015. China on the other hand does not encounter the US institutional difficulties in treaty ratification. It has gained international respect and credibility for having endorsed the non-first use of nuclear weapons and for its restraint both in the size of its arsenal and in the number of its past nuclear tests. China might wish to seize this opportunity to show leadership corresponding to its enhanced international role by becoming the first of the NPT Annex 2 missing states to ratify the CTBT. It should give this good example well before the 2015 Review Conference.

Without progress in some or all of these areas, the risk is that the 2015 Review Conference will not be a successful one and that the credibility and viability of the entire NPT regime may be damaged in the process.

ELN commentary quoted in the Iranian

An ELN commentary on the Iran crisis by ELN Policy Fellow Sahil Shah and Founder and Publisher of Bourse & Bazaar, Esfandyar Batmanghelidj, has been quoted in the Iranian. 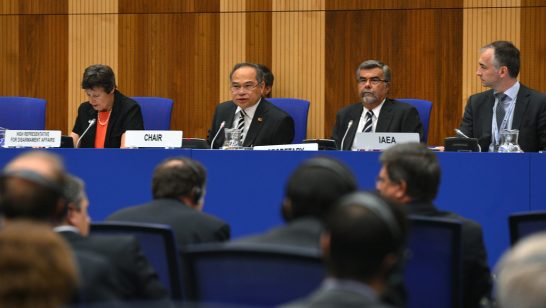