The EU’s High Representative, Federica Mogherini, aims to replace the 2003 European Security Strategy with a Global Strategy to guide the Union through an increasingly connected, contested and complex world. Mogherini believes Member States have given her a mandate to take a broad and bold approach to external action. She has underscored Europe’s responsibility to both protecting EU citizens and promoting interests and values; yet, the place of security in that new strategy is still to be defined.

Instead of hectically focussing on “the threat of the day”, the strategy should seek to tackle Europe’s long-term crucial weaknesses. We currently observe a disproportionate concentration, not to say hype, about hybrid warfare. Yet, hybrid warfare is only a reification of the more general risks Europe is facing. It has the advantage of pointing exactly to those weaknesses that Europe’s adversaries might turn into existential threats to the Union. Europeans should thus break away from their current stark focus on Russia’s hybrid tactics and start thinking beyond the current crisis by making Europe’s general vulnerabilities the centre of their security policy. When decomposing the phenomenon of hybrid warfare, four essential areas of weakness become visible. Rather than geographic regions, they concern the elements that are crucial for the political and societal functioning of the Union and its members:

The first remains Europe’s territorial integrity. The likelihood of a military conflict between Europeans and other actors has increased because of, among other things, Europe’s military weakness. Others may be tempted to advance their interests militarily; the Baltic area seems particularly vulnerable here. Besides, Europeans cannot simply withdraw from a conflict on their borders – neither in the East, nor the South. This is one of the reasons for European states involving themselves in fighting the IS.

Second, political disunity makes Europe vulnerable: The Ukraine crisis has shown that Europe can only wield influence when united. National measures against Russia would be ineffective. Yet, in view of the different priorities of its members, European unity cannot be taken for granted: the Baltic States feel directly threatened by Moscow, yet other countries in the south and west do not see Russia as their main problem – France, for example, is more concerned with instability in the Sahel.

Third, Europe is vulnerable due to the dependence of its societies on global infrastructure and free flow of goods, services, people, and capital. Russian energy supplies are a perfect example of this. Indeed, the openness from which Europe profits makes it susceptible to disruptions of its global interdependencies.

Fourth, the pluralism of Western societies can be exploited. One lesson from Ukraine is that a conflict can emerge from internal destabilisation. Many European countries are worried about citizens returning home after fighting for IS abroad. Add to this the vulnerability of infrastructure such as water supply, or economic systems. Many are not designed to function in conflict conditions.

The Ukraine crisis has exposed significant European vulnerabilities and should provide a stark warning that other actors could apply hybrid tactics in the future. When thinking about the strategic direction of its security policy, Europe is thus well advised to prepare for those threats by developing a hybrid security based on three pillars: deterrence, resilience, and defence.

Deterrence: Military conflict remains a risk for which Europeans must prepare. The Ukraine crisis prompted NATO to strengthen its conventional forces at the 2014 Wales summit. The adjustment of the nuclear strategy needs to be discussed. But deterrence is also civilian. The prevention of an escalation brought about by hybrid means requires fast civilian tools to fend off attempts to exploit dependencies and weaknesses. Europe must develop responses to such things as restricted energy supply, infiltration or cyber attacks. Internal security is crucial – police, border security, and civilian administration should be up to the task.

Resilience: The interconnectedness and openness of Western societies endow them with great strength, but also leave them vulnerable to attack. Societies have to be empowered to better resist and quickly recover from attacks on their values and everyday life. Better early warning systems and risk management are essential. Weak spots that could be taken advantage of range from economic dependence to unhappy minorities must be covered by protective measures.

The first task here is to strengthen social unity. This demands migration and integration policies that regard diverse societies as worth safeguarding. These aspects must in turn be supported by economic, social, and education policies. It is necessary to enable minorities to integrate in such a way that they are less susceptible to radicalisation. It is also imperative to better protect key infrastructure. The technical foundations of societies have to be resilient. This can happen, for example, through the establishment of redundancies or alternative supply routes.

Defence: Should deterrence fail, the defence of territory and institutions against military attack remains crucial. But crisis management cannot be neglected, because Europeans cannot guarantee their security by territorial defence alone. And in light of global interdependences they will be required to defend their security outside of Europe as well. Here, the military remains an instrument of last resort in acute emergencies. The use of political and economic tools to support a stable international order has to be the highest priority, because such an order supports the openness and interconnectedness from which Europe benefits so tremendously.

Most opportunities to take action are at state level. However, states often do not possess the necessary instruments, or only to an insufficient degree. Therefore, the EU needs to develop responses and bundle resources. While NATO is crucial in military terms, the EU clearly is in the best position to take on civilian and civil-military issues. The Union can most effectively assess where social, legal, and economic situations might be fragile within member and neighbour states. And it has the tools, such as in social policies and infrastructural support, to address such vulnerabilities.

The first task for the forthcoming strategy would be to identify where and how Europe is vulnerable. Second, it needs to better combine the existing instruments of security policy, risk management, and prevention – namely deterrence, resilience, and defence – and readjust the mix of civilian and military elements. Key for a successful hybrid security policy is a reasonable division of labour and better cooperation between EU and NATO. 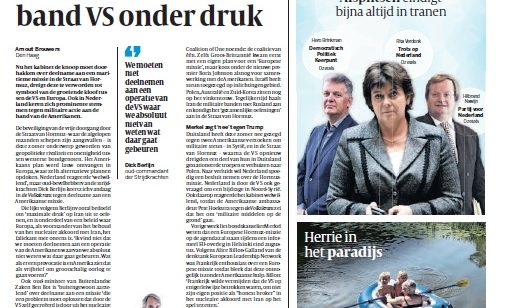 Alice Billon-Galland quoted on the front page of De Volkskrant

This ELN brief on the Open Skies Treaty (OST) has live updates, including European and Russian reactions, to the US withdrawal from the Treaty.

Russia and Europe have to rescue Ukraine together

Igor Ivanov explains why the arguments over depriving Ukraine of a “European choice” do not hold and urges countries to move away from mutual accusations to setting out specific ways through which Ukraine can stabilize.