The 2020 Review Conference of the Non-proliferation Treaty will be a crucial test for the non-proliferation and disarmament community. There are concerns the NPT process is at risk of crumbling, and without serious efforts to revitalise it, it could be damaged beyond repair. Whilst it is the responsibility of all states parties to the Treaty to support it, the process is missing a leader who can take the initiative to spearhead efforts towards achieving the NPT goal of a world free of nuclear weapons. This UK is an ideal candidate to fill this vacancy.

The last Review Conference (RevCon) has also cast a shadow over the road to 2020, increasing the pressure on a successful output this round. With no consensus reached on a final document in 2015; failure to do so again would mark the first two consecutive conferences not to end successfully. To reduce this risk, the UK should prioritise reforming and reinvigorating the P5 Process into a P5+ forum and continuing to spearhead verification efforts to make nuclear disarmament practically feasible.

Lack of progress on disarmament has caused a rift in the NPT, with little opportunity for agreement and progress. Independent of the NPT process, the Humanitarian Initiative and ban treaty movement tried to stimulate progress on nuclear disarmament. But as the Humanitarian Initiative turned into a drive towards the Treaty on the Prohibition of Nuclear Weapons (TPNW), an opportunity has been missed. Discussing the humanitarian risks of nuclear use could potentially be a conversation all NPT states could join and use as a pathway for risk reduction measures such as de-alerting and making no first use pledges. Although engagement was at first non-existent and at best reluctant, with frequent references to degrading security environment, nuclear weapon states (NWS) were slowly engaging with the humanitarian narrative. The UK acknowledged concerns of humanitarian consequences in its 2015 RevCon National Statement, and both the US and UK attended the final Humanitarian Initiative conference in 2014.

Dialogue in this area would almost certainly have been cautious on the part of the NWS, but the opportunity to bridge divisions through engagement was emerging. By deciding to direct the humanitarian initiative efforts into a Prohibition Treaty, the movement instead further divided the international community on how to best move forward with nuclear disarmament.

This is not an entirely negative action. Because of the TPNW, NWS especially should be looking to inject new life into the NPT process to demonstrate it remains the cornerstone of the regime. What is currently lacking however is some energetic leadership and direction.

The UK is in a prime position to take on this role for three key reasons.

Firstly, this NPT leadership gap offers an opportunity for the UK as it seeks to develop a new international role post March 2019. Historically the UK has been willing to take such a position in relation to the NPT, for example through initiating the P5 process. As Brexit and the future of foreign relations engulf Whitehall, London would do well to realise this offers a chance to further a more internationalist agenda, and could grant the UK the global leadership it craves post-Brexit.

Secondly, unlike some others in the P5 club, the UK has a degree of credibility when making statements about being committed to disarmament. The UK can be maximising its claim to leadership by capitalising on its unique position as a NWS and P5 member that has pursued unilateral step-by-step nuclear reductions. Although France too has taken unilateral steps to support nuclear reductions, the UK has arguably done more in this area by reducing its arsenal to one delivery platform and maintaining the lowest possible minimum credible deterrent.

In specific terms, to make use of its position as a leader, the UK should consider initiating a P5+ process, whereby engagement would not just be limited to the NPT nuclear weapon states, but involve also interested non-NWS in collaborative working groups. The mandate of these working groups could be modelled on the 2010 64-point Action Plan to discuss key areas of concern, including but not limited to: national reporting to improve transparency; measures to increase negative security assurances to non-nuclear weapons states; and efforts to reduce the accidental use of nuclear weapons. Initially the goal of these groups need not be to produce concrete outputs, but to highlight areas of convergence and divergence before considering options for concrete action.

Disarmament verification research would also benefit from more UK leadership, if only to ensure that other states stay engaged. As the only practical work being carried out on disarmament, it is vital that this does not fall victim to NPT rifts. The UK should encourage more states to participate, and ensure that adequate funding remains available to conduct this work. Although the verification research is predominantly technical, it can sustain interest and lead to political conversations on future disarmament initiatives. Specifically, the UK should be mobilizing the rest of the international community (ideally including all P5 states) to work towards answering the question of how gain confidence that an item prepared for dismantlement is actually a nuclear weapon. Resolving this problem will be essential for both NWS and NNWS in order to commit to and uphold multilateral nuclear disarmament agreements in the future.

The NPT process is in a precarious place, and 2020 could be a tipping point in either positive or negative direction. No country is an island when it comes to multilateral disarmament. The UK is in a prime position to assume leadership, begin to bridge the gap between different groups of states and drive forward consensus for 2020. 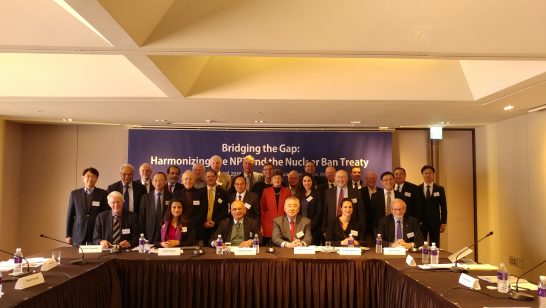 Reflections and recommendations: The future of non-proliferation and disarmament

In the current deteriorating security environment there should be no complacency over the health and future of the NPT. The case must be re-made for the security benefits of this vital treaty.