As consensus emerges on the possibility that, should a major war occur, satellites will mostly likely be attacked or harassed in one way or another, there is increasing deliberation on ‘space deterrence’, or how to prevent would-be aggressors from attacking satellites and other parts of space infrastructure on Earth. Reasoned analysis focuses on applying imagined thresholds of sensitivity and reaction based on the types of satellites attacked, how they are attacked, and when they are attacked in a crisis. For example, a Planet Labs imaging satellite being jammed outside of a crisis is a different incident compared to a Keyhole imagery satellite being destroyed during a Taiwan crisis.

Indeed, it is crucial to think about what systems any space power may value above all others, which they may be able to suffer losing, and which losses may provoke a stern reaction. Most tools of space warfare today, of which America, China, and Russia lead, include jamming and Earth-based kinetic-kill capabilities that are ground, sea, or air missile based. Additionally, many Earth-based weapons such as missiles, attack aircraft, and naval vessels can bombard ground facilities if they are in range. However, as those narrow discussion tend to delve into the technical and tactical weeds, there are useful principles to remember when considering space deterrence on a more strategic level.

With the tools of space warfare spreading, then, how does one deter an adversary from attacking one’s valuable and essential space infrastructure that is responsible for precision warfare as well as precision farming? This is a very difficult question to answer, and there are no direct and holistic ones to be given. But general ground rules for strategic thought can be provided. The difficulty is that any reason to think that space deterrence may be easier to achieve than equivalents on Earth has a counter that may highlight why, in some circumstances, space deterrence may be harder to impose in the mind of the adversary.

First, politics, strategy, and deterrence relationships in space are extensions of those on Earth. Space deterrence remains an art of understanding the opponent’s psychology, valued possessions, and political objectives, as space deterrence is just a thematic or geographic variant of deterrence in general. Although space specialists are needed to understand spacepower, war in space is still subject to the same strategic logic as other terrestrial environments, and therefore deterrence in space cannot ignore events on Earth. Space warfare is merely the continuation of Terran politics by other means; a shooting war is space does not occur in a political vacuum. Additionally, some countries may have an ability to attack or disrupt satellites but possess no space-based assets of their own. Therefore, a tit-for-tat exchange of responding to a satellite attack with a satellite attack will not always be an option. Terrestrial threats and retaliation may be called for to deter attacks on space assets and space deterrence requires a joint approach, just as a joint approach to modern deterrence on Earth requires spacepower to function.

Adhering too narrowly to the concept of ‘space deterrence’ can mislead analysis to isolate space from Earth. It is as misleading as speaking in terms of ‘air deterrence’ or ‘sea deterrence’. Deterring a state from taking a particular action in any environment requires more than one method of deterring by denial or punishment.  Rather, modern deterrence relationships need to account for the role space systems play in building holistic deterrent and warfare capabilities in every environment, as well as the role satellites and space infrastructure may play in triggering, exacerbating, or resolving crises on Earth, as well as winning wars.

Space is often an afterthought or a miscellaneous ancillary in the grand strategic views of top-level decision-makers. A president may not care that one satellite may be lost or go dark; it may cause panic and Twitter-based hysteria for the space community, of course. But the terrestrial context and consequences, as well as the political stakes and symbolism of any exchange of hostilities in space matters more. The political and media dimension can magnify or minimise the perceived consequences of losing specific satellites out of all proportion to their actual strategic effect.

Second, some tactically relevant space systems provide nuclear attack early warnings, and therefore deterrence failure poses greater potential consequences. Although space may be subject to strategy and politics, the consequences of actions in space may have a greater gravity than an exchange of fire over a border. Russia’s aircraft buzzing UK airspace is a relatively safe sabre-rattling exercise. However, conducting stalking operations and manoeuvring closely to military communications satellites risks cutting off hundreds of users on Earth and removing a part of critical infrastructure. Similarly, stalking a handful of GPS satellites or persistently jamming its signals would undermine standard operating practices of masses of deployed military units, disrupt commercial aviation and maritime traffic, and undermine the financial trading system.

More seriously, however, is that many space systems that are used for nuclear attack early warning also provide tactically relevant information, such as the American Space-Based infrared System (SBIRS). With a system that is so tactically useful, there are many reasons for an adversary to disrupt its use or destroy it to conceal conventional military movements on Earth. However, attacking a SBIRS satellite may instead trigger the belief in the US that a nuclear attack may be imminent. Depending on the satellites targeted, the consequences of deterrence failure may be disastrous.

Third, space systems don’t have mothers, but some mothers do use them. Contrary to military action on Earth, hostile activity against satellites will not directly threaten lives. Destroying one satellite will mean some expensive hardware has been lost, but no letters to bereaved relatives will need to be written. The relative lack of emotive and high-level political responses that may be generated by losing a satellite may make deterring an attack in space harder. Losing an aircraft means the loss of a few pilots, losing an aircraft carrier may mean a few hundred, possibly over a thousand dead, and may generate a much tougher and emotive response in a crisis, and therefore may be easier to deter than an attack on an orbiting machine.

That said, however, as satellites constitute an infrastructure, the systemic consequences of losing significant amounts of satellite services may translate into higher degrees of suffering, death, and economic costs than the loss of weapons platforms may do, particularly if such disruption occurs over the long term. First responders and military forces will have to revert to pre-1980s methods of navigation and despatch; inefficiencies in the global supply chain will test the limits of the just-in-time economy for food and medical supplies; energy grids may cease to manage energy fluctuations. Indirectly, these worst-case scenarios threaten far more civilian lives and home territory more than a few clashes in a border region or a maritime zone. A citizen may have no direct use for GPS beyond navigating the car, but after a few days without GPS the health services, energy, and food supply system they depend upon will be put under increasing levels of strain. But this is a worst-case scenario.

Fourth, the ubiquity of space infrastructure and the fragility of the space environment may create a degree of existential deterrence. As space is so useful to modern economies and military forces, a large-scale disruption of space infrastructure may be so intuitively escalatory to decision-makers that there may be a natural caution against a wholesale assault on a state’s entire space capabilities because the consequences of doing so approach the mentalities of total war, or nuclear responses if a society begins tearing itself apart because of the collapse of optimised energy grids and just-in-time supply chains. In addition, the problem of space debris and the political-legal hurdles to conducting debris clean-up operations mean that even a handful of explosive events in space can render a region of Earth orbit unusable for everyone. This could caution a country like China from excessive kinetic intercept missions because its own military and economy is increasingly reliant on outer space, but perhaps not a country like North Korea which does not rely on space. The usefulness, sensitivity, and fragility of space may have some existential deterrent effect. China’s catastrophic anti-satellite weapons test in 2007 is a valuable lesson for all on the potentially devastating effect of kinetic warfare in orbit.

Fifth, the most likely forms of attack/interference that may need to be deterred in space are specifically-timed solitary assaults on specific satellites crucial for crisis management or specific military operations. In this instance, the victim can still live with the loss of a handful of reconnaissance satellites and communications systems over a region of Earth for a few hours whilst the aggressor creates new facts on the ground. Since a wholesale attack on a country’s space infrastructure risks an undue escalation towards total war, isolated and tailored attacks on the most relevant satellites for the adversary’s military operations in the relevant theatre on Earth could provide a proportionate space warfare strategy. Intelligence agents, special forces, aerial and maritime reconnaissance, and light infantry operations that are so useful in crisis management and the beginning of conflict have specific dependencies on satellites that do not undermine a state’s survival. However, as a caveat, the paradoxical nature of strategy means that sometimes because something is expected and believed to be likely, it will not be done. Sometimes the unexpected or unlikely course of action will be chosen precisely because it is unexpected, and the art of deterrence morphs into the art of war.

As deterrence is a practical art, and not a science, understanding what a potential adversary fears and values on Earth as well as in space is more important when examining how to deter an attack on your own space systems rather than applying arbitrary values on space systems. Punishment and denial can take many forms and a spread of each increases an overall deterrent effect. Punishment could be a tit-for-tat in attacks on satellites, or bombarding sites and targets on Earth may be a more appropriate response. Denial can include hardening satellites to withstand any electronic assault, or in increasing resiliency, redundancy, and replenishment across entire satellite constellations or terrestrial work-arounds and stop-gaps. No one of these options alone will create an objective deterrent as deterring an adversary is an art dealing with politics, psychology, paradoxes, uncertainty, and every geographic environment on Earth. The political and strategic dynamics of space warfare can push and pull in both directions in terms of escalation potential and deterrent effect. It is important to match an understanding of the value of specific space systems with the goals and values of whomever it is you wish to deter. ‘Space deterrence’ should always be thought of in the larger context of deterring war as a whole. In that broad sense, space deterrence is not that different to common practices of deterrence established during the Cold War and the dawn of the Space Age itself.

Law and Order in Cyberspace

Maarja Naagel, Researcher at the NATO Cooperative Cyber Defence Centre of Excellence, argues that we should reject the mystifying rhetoric of “legal vacuum” in cyberspace and instead stay firm in our commitment to the rules-based international order. 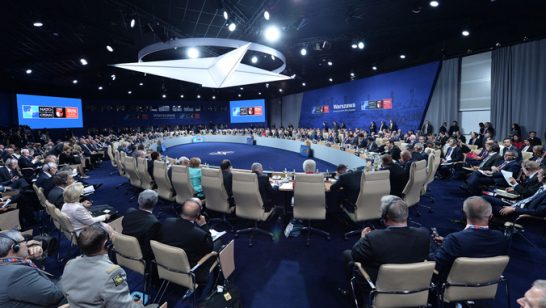 The ELN examines the strengths and weaknesses of NATO deterrence posture, and how alliance policy can be improved and more effectively communicated. Doing so, the authors argue, of crucial importance to Euro-Atlantic security.